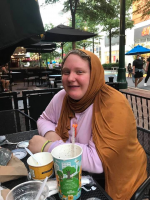 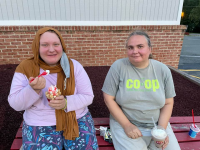 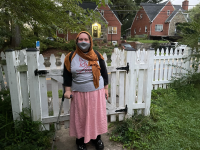 From “School Days” by Richard Barone and Will D. Cobb

North went back to school today, their first full-length, in-person day in almost a year and a half. (They were in the school building for sixteen shortened days during the fourth quarter of last year.) We managed to packed a lot of fun into the last five days of summer break.

“Are still wearing KN95 masks?” North said when they saw me grab one off the hook near the front door. For a couple weeks before North left for camp, we were extra cautious, because they were about to spend a week with kids aged eight to fifteen and the younger ones would be unvaccinated. We didn’t want to risk having North pick up an asymptomatic infection and pass it on to one of them.

I said a cloth mask was fine. We were headed to the Crossroads farmers’ market in Langley Park to pick up some peaches and for one last pupusa stand lunch before school started. We were also going to Starbucks so North could start spending down some soon-to-expire stars on their card. They got an iced vanilla latte and a pumpkin-cream cheese muffin and felt the need to justify themselves because they know I have strict rules about seasonal treats (but only for myself). “You do you,” I told them. I got a matcha lemonade. I asked if they were excited for school next week and they said, “Not really.” I don’t suppose I was either, going into tenth grade, but I thought absence might have made the heart grow fonder.

As we walked home across the Carroll Avenue bridge over Long Branch, a bridge which we would have walked under on our ill-fated creek walk two weeks earlier if we had gotten that far, I asked North if they thought Noah would ever go on a creek walk again after his mishap with the bees and they said maybe. Would they, I asked. Yes, they said, but we resolved to stay far away from deadfalls that might harbor beehives.

The next day North and I went to a matinee of Coda. We boarded a bus to Silver Spring around 3:55 and within minutes it was pouring rain. We had to walk a couple blocks to the theater, with a pit stop at Starbucks to use up more stars (North got another iced vanilla latte and I got a black tea lemonade). We had a big umbrella, but we still got moderately wet. I was afraid my feet, bare inside wet crocs, would cause me to get chilled in the air-conditioned theater so I lined the crocs with paper towels from the bathroom, which made North laugh, but soon the towels absorbed the rainwater, my feet were dry, and I made it through the movie without developing hypothermia, so I think it was a successful strategy. The movie was well-acted and fun (with some fairly unrealistic plot points, but what are you going to do?). Afterwards we had soup and sandwiches and split an Oreo shake at Potbelly’s.

Also, if you’re on the fence about going to the movies these days, I recommend weekday matinees. When Noah and I went to see The Green Knight the week before we’d had the theater to ourselves and this time there were only four other people.

Friday afternoon Beth took North shopping for school supplies and new clothes (and to get a pink drink at Starbucks that finally used up North’s expiring stars). They were gone a couple hours and I found with Noah at school there were a lot more undone chores at the end of the week, so I folded a load of laundry, mowed half the back yard before it started to pour rain, cleaned the remaining half of the bathroom North had started to clean the day before, and made a half-hearted attempt to straighten up the kitchen before deciding I should spend at least some of my time alone in the house reading on the porch.

It had cooled off after the rain and it was pleasant out, if only temporarily, and I had the new Stephen King book. I bought it before Noah left and saved it on purpose to distract myself once he was gone. But I didn’t even want to pick it up the first several days. Reading a book seemed like more than I could  manage, until that afternoon when it suddenly seemed like a good idea. I have to admit the beginning didn’t really grab me, but I trust King enough to give it a chance.

When Beth and North returned, North put on a fashion show for us. The fitting rooms had been closed at Target, so they wanted to see what fit. Everything did except one dress. They seemed happy with their new togs and it was nice to see them taking pleasure in them.

We had Little Caesar’s for dinner, because North was in the mood, and then we watched Midnight Sun, which really isn’t the best film you can see about fatally ill teen(s) in love. I think North’s favorite in this genre is Five Feet Apart.

Saturday morning North decorated their binder with stickers, which isn’t something I’ve seen them do in years, and they wrote the ingredients for their school lunches on the grocery list. Beth went kayaking, but I skipped it, thinking I could use some down time. I read a lot that day, but I also finished mowing the lawn, menu-planned for the next week, and cooked dinner.

North slept over at Zoë’s that night. They’d been bummed all three of their best friends were out of town during the week between camp and school, so they squeezed in all the time with Zoë they could over the weekend. They were at her house from early Saturday evening until late Sunday afternoon. I suspect they were up late because one of the first things North did on getting home, after cooking sushi rice for their school lunches, was to take an hour and a half nap.

While they were gone, Beth and I had avocado tostadas for dinner, because North does not care for avocado, and watched Summer of Soul, because they instantly veto any documentary. I made pico de gallo for the tostadas, with garden tomatoes and cilantro and it turned out pretty well. The movie is excellent. You should watch it if live performances of B.B. King, David Ruffin, Gladys Knight and the Pips, Mahalia Jackson, Mavis Staples, Nina Simone, Sly and the Family Stone, Stevie Wonder and 5th Dimension (and interviews with many of these artists) sounds like a good time to you.

Sunday after dinner, we went out for North’s last-night-of-summer-break ice cream. They wanted to go to Dairy Queen and the closest one is in Rockville, but as no one was rushing to print out summer homework assignments—North had none this year for the first time in our fifteen-year history with MCPS—a drive didn’t seem like a bad idea. North got some kind of strawberry cheesecake concoction, I got a chocolate malted, and Beth got a raspberry-chocolate blizzard.

North got up before the sun, at 5:30, after a summer of not emerging from their room until late morning most days. Because they aren’t going to our home high school they have a long bus ride and they have to get up even earlier than Noah did in high school. I got out of bed long enough to wish them a good first day and then went right back to bed. They left around 6:20 and Beth walked with them to the bus stop as part of her morning walk. She reports that she passed a lot of high school bus stops and all the kids at every stop were wearing their masks, even outside and without their parents watching. She found that heartening. Maybe this in-person school thing is going to work out.

Beth and I went about our normal routines, except I made a small batch of sugar cookies because I thought it would be nice to come home to the smell of baking. North did seem pleased with them when they came home at 3:30. But first they collapsed on the couch, exclaiming “Air conditioning!” They said they had a good day. Their teachers seem nice. One kid they knew from middle school was in a couple of their classes and they saw another at lunch. They could have eaten outside, but didn’t. Everyone wore their masks but one teacher had to keep yanking up his falling mask. They decided to apply to for a stage manager position for the school play they learned about in Theater class (and did it online soon after getting home). Their Spanish feels a little rusty after a year off to take Japanese, but they’re pretty sure it will come back. They only had homework in one class (a get-to-know-you PowerPoint for English). It was the kind of assignment that would have paralyzed Noah, but they made short work of it.

And speaking of Noah, I texted with him a little during the day and learned he’d reconnected with one of his friends from his first year, inviting him over to his apartment and meeting up with him at an on-campus screening of The Breakfast Club. Because he was a lone wolf in high school and during his at-home sophomore year (except the time he spent on two film shoots), I was glad to hear was he socializing again.

So it seems both kids are off to a good start. If you’ve got kids in school, I hope they have a smooth and safe start to the new year.