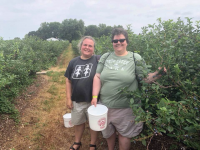 I wish
More than life

Baker and His Wife:

From “Prologue,” Into the Woods, Stephen Sondheim

We’re just over a month into summer break and each week has had a different configuration of family members in different places. Last week (the fourth week) North was still at drama camp in the daytime working on a production of Into the Woods and either home or at My Fair Lady rehearsals in the evenings, and Noah was at a sleep-away camp for the first time ever.

It was a Java programming camp at George Washington University, where I used to teach. In fact, it was at the small satellite campus where I taught my last four years there. It’s close enough to home that he could have commuted (there were both day camp and residential options), but I remember it being at least an hour and a half each way on public transportation—though he wouldn’t have needed to stop at the University day care at the main campus to pick himself up, so I guess that would have shaved some time off the trip. Anyway, the sleep-away aspect was actually what we were looking for because other than a five-day field trip to New York in eighth grade, Noah’s never been away from home out of the care of relatives and it seemed like a good idea to do it for at least a week some time before he leaves for college.

The camp turned out to be less than ideal in some ways. It wasn’t challenging enough for him and the campers didn’t have much freedom to wander around either campus by themselves, so it might not have fostered as much independence as we would have liked, but still, he was away from home in the company of strangers and that was one of the principal goals. And he did design a game, which I played at least a half dozen times Monday night. You have to navigate a man through a set of openings in obstacles. I don’t know how many levels there are but when he was demonstrating it for me, he got up to level 22. I don’t think I’ve ever gotten past 10 and the one that trips me up most often is 8, because the opening is all the way over to the right side of the screen and I can’t get the avatar over there fast enough.

As for North, I didn’t anticipate how tiring it would be to rehearse six to nine hours a day, depending on whether they had to go to the theater after camp. I know that sounds ridiculous when I write it out that way, but I thought it would be equivalent to being at school all day and then having a three-hour rehearsal, which they often did in sixth grade. The difference was drama camp is more physically active than school. And My Fair Ladyis a dance-intensive show, so it made for some pretty long and exhausting days.

That might be why when on Wednesday evening as North and I were eating dinner and Dire Straits’ “Money For Nothing” came on, North had more objections to the “money for nothing” part of the equation than the “chicks for free” part, because “Writing and performing songs isn’t nothing! It’s hard work!” Still, I felt the need to have a little discussion with them about the difference between the speaker of the song and the songwriter.

Friday was the Into the Woods performance. Unfortunately, the kids at Noah’s camp were also giving presentations on the projects they’d been working on at the same time. I considered going to the dress rehearsal for Into the Woodsand then taking a Lyft to Noah’s presentation. It might have worked if everything had gone just right, but when I asked North they said they’d rather I come to the real performance…so Beth and I split up, with me at the play and Beth at the computer camp presentation. I was sad about it, but there was no good solution.

The night before the performance, Beth taught me how to set up Noah’s tripod and use his camera so I could film the performance for Beth and Noah. This responsibility was somewhat nerve-wracking as I am the least tech-savvy person in the family. (Disclosure: I don’t even post this blog myself. Beth does it for me.)

But I needn’t have worried. I remembered my lessons and though it took me awhile to position the camera and tripod so the whole stage was in the frame (I ended up moving two rows back from my original seat) I managed to film the show. The narrator who stands off to the side of the stage is rarely visible, but otherwise, you can see everyone.

What to say about the show? It gets more ambitious every year. When North was five it was just a revue of several songs from The Sound of Music with a puppet show for the song about the lonely goatherd. Eventually—I can’t say exactly when, maybe it was just last year when they did Beauty and the Beast—it started to feel more like going to a scaled-down version of a play instead of a selection of scenes from a play. Their version of Into the Woods was an hour and fifteen minutes long. If you’re familiar with this show, you know the singing is almost non-stop and very challenging. It’s been so rewarding to see the kids, many of whom have been in musical theater camp with Gretchen since they were small, grow as singers and actors. The age range of the camp keeps shifting upwards as the kids get older. This year the kids were ten to fifteen.

Some years there’s one actor who really steals the show, but performances were strong across the board this year. Maggie made a very menacing wolf, Grace was a spunky Little Red, Lottie and Anna shared the role of the witch (who changes appearance in the middle of the play) and both actresses skillfully portrayed her villainy but also the very human pain and neediness underneath it. The princes were appropriately smarmy and I could keep citing performances but I’ll just say again that everyone really shone. And the singing was great. Some of those kids I’ve always known were talented singers, but I heard powerful singing from others that hadn’t sung as much in previous productions.

In my unbiased opinion, North did a wonderful job playing Jack, both in his comic and earnest moments. They had good chemistry with Little Red in their bickering scenes and their singing was lovely, as always.

Here’s their big solo, “Giants in the Sky.”

And here’s “Your Fault,” which is a good example of multiple actors singing rapidly interwoven lyrics, which is common in the show. North’s in this song, too.

There was a cast party at Roscoe’s that evening, and after we’d finished our pizza and gelato, a gang of the actors left the adults at the restaurant and went next door to get their fortunes told by a psychic, then wandered down the block to a nearby playground. We eventually followed them there. Seeing them draped over various pieces of playground equipment, looking like overgrown children, I thought back to Lottie’s tender delivery of the witch’s plea to Rapunzel to “stay a child while you can still be a child.” Some of them are still children, some are poised on the brink of adolescence, and others are in its early years, but to hear this girl, a rising ninth-grader, sing those lines was poignant, almost heart-breaking. They can’t stay children and I wouldn’t really want them to, but still…

Time marches on and if we needed any reminder of that, it was the thirty-first anniversary of Beth’s and my first date on Sunday. We did most of our celebrating Saturday. We went to see Three Identical Strangers (which I recommend) and enjoyed a delicious dinner at City Lights of China in Bethesda. On Sunday all four of us went blueberry and blackberry picking but before that, right after breakfast, we exchanged small gifts—Beth got me two kinds of tea from the tea shop in Rehoboth (mint and peach-turmeric) and I got her a gift certificate to ACE hardware, which I know doesn’t sound very romantic, but she’d just said it makes her happy just to walk in there, so it seemed appropriate.

In the summer of 1987 when we were twenty and tentatively flirting with each other, Beth wished on a falling star for me to fall in love with her so for our summer anniversary (our wedding anniversary is in the winter) she often tries to find a card with a star or stars on it and this year her card was studded with stars and the text said, “Got My Wish…You.”

Into the Woods starts with each character making a wish—to go to the king’s ball, for a dry cow to give milk again, to have a child, etc. By the end of the first act those wishes have all come true but things start to unravel in the second act, thanks to a rampaging giant. By the end of the show most of the characters’ losses have been at least partially recompensed (orphaned children adopted, widowed or separated characters in a new pairing). It’s a realistic acknowledgement that no-one’s life is one long happily ever after, but human connection is still possible, even after loss. That one wish Beth made all those decades ago did come true, and I’m glad it did. My card said, “Damn, I love you so much,” and I do.