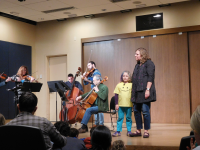 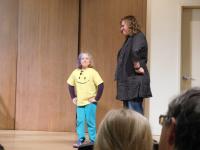 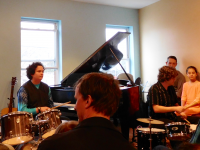 The kids went back to school Monday and I admit that even after Noah told me there was an official announcement on the school district web site to this effect, I kept checking it to make sure they weren’t going to take it back. I’m just a little paranoid now. But they did go back and then yesterday the groundhog didn’t see his shadow, which was cheering, as I am all for an early spring.

But before the kids stepped on their buses and I went back to my empty house to enjoy my normal workday routine, we had a very musical weekend. Both kids had a public performance. To my amusement, June played violin at something called a jam and Noah played drums at something called a recital.

Saturday June performed with Becky, her old preschool music teacher, and the Takoma Ensemble string quintet in a program for children seven and under. It’s part of a series called Peanut Butter and Jam. The theme of this performance was feelings. We dropped June off at the community center for a dress rehearsal a couple hours before the show. (Or rather Beth dropped her off. I was already there, having stood in line an hour and fifteen minutes to register June for drama camp next summer. Early in-person registrants got a hefty discount that day, so it was worth it.) June had rehearsed a couple times previously with Becky but this was the first time all the performers would be together.

When Beth, Noah and I arrived at show time, we took our seats. Most of the audience was in seats, but there was a kind of toddler and preschooler mosh pit right in front of the stage.

We saw a lot of people we know, most with younger kids: the toddler brother of a boy from June’s school bus stop, a preschool classmate of June’s who was there with his younger sister, the two little girls who live down the block and whom June helped watch last week. But we were especially happy to see June’s best friend Megan and her dad. June had missed a Pandas’ game due to the dress rehearsal and Megan reported they’d won “by a lot of points” and that she’d scored a basket. (I later found out from the coach that they won 23-8! Since they won their last game as well, the Pandas are now, surprisingly, having a winning season.)

The show started with Becky talking about the snow and how it caused many people to have feelings—happy, angry, and sad. I could relate to that. Then she sang a couple songs with the audience. During “If You’re Happy and You Know It,” June entered from backstage, looking sad and singing, “If you’re sad and you know it, drag your feet.” Then for the bulk of the program she and Becky then discussed various feelings, with the string quintet playing or Becky singing music that demonstrate those feelings.

At once point when Becky asked her what she does to feel good, June said she plays the violin and then she played “Twinkle, Twinkle, Little Star.” Her right pinky was still in a splint, but it didn’t seem to affect her playing. If you’ve ever seen June act, you won’t be surprised to hear she was very expressive and enjoyed hamming it up with Becky. The cowered together during the scary music (a Vivaldi piece meant to evoke a thunderstorm) and scowled and stomped during the angry music (Shostakovich). Finally, the musicians introduced their instruments—violin, viola, cello, and bass and then Becky sang a few more songs with the audience and it was over.

After the show there was a reception and we stayed and June ate snacks (fruit and sunflower butter sandwiches, in deference to possible allergies) and we talked with people we knew and a few we didn’t, a few of whom came up to congratulate June.

The next day the music school recital was being held in three shifts, at 4:00, 5:00, and 6:00. Noah was playing in the middle performance. He and his drum teacher had composed a partly improvisational piece called “Percussion Duo.” They’d been working on it for a few weeks and Noah even came in for an extra lesson that the teacher gave him free of charge. They also had to go to a jury, or audition, for the school administrators a couple weeks before the recital.

I was glad about this because Noah gets very nervous at auditions and his last two haven’t gone very well. The music school juries aren’t as competitive as the honors band and jazz band auditions, so I thought it would be a good way to re-build his confidence for the next one he has, whenever that is. This one went fine. If you’re judged not ready you can come back for a second jury, but he passed the first one.

Before the recital I went swimming (at the pool! Which was open!) and then to the library and when I’d finished there I realized I was actually closer to the music school than home and if I walked home it would just be time to get in the car and go, so I called Beth and told her I’d meet everyone at the recital. So naturally, I was forced to go wait at the bakery and have a cup of tea and a slice of marble cake and read the Sunday Arts and Style section of the Post, which I happened to have in my backpack. (I have been spending far too much time at that bakery, or more precisely eating too much there, but it had been a very hard week.)

At ten of five I left the bakery and I saw Beth and June in the car driving around looking for parking. Noah was already in the building. I went in and saved three folding chairs in the rapidly filling room and watched as Noah and his teacher Jason set up the drum kit. Noah looked very serious and avoided eye contact with me as he went up and down the aisle.

On the program Noah was second to last out of sixteen performers. They generally order them from less to more experienced musicians. The school’s students range from preschoolers to teenagers, but they skew young, so I wasn’t surprised to see him so close to the end.

The drum kit was right in front of the piano and there were chairs for the musicians and audience almost right up to it so I wondered where the violinists would stand and where they would put the guitarists’ chairs. I like the music school front room. It’s warm and sunny, with three windows facing the street and the walls are painted in nice shades of blue and cream. Nonetheless, it’s a small space for these events and I’ve often thought they should rent a larger space for recitals.

Then the office manager answered my questions by announcing they were changing the order of performances to have Noah and Jason go first, after which they’d disassemble the drums to make room for the other performers. Compared to the rest of the performers, Noah and Jason were dressed casually—Noah in his trademark sweater vest over a tie-dyed t-shirt and Jason in a black short-sleeved button down. Later Noah asked why we didn’t tell him to dress up. The answer was he’d been to enough music recitals of June’s that I thought he’d remember what people generally wear and he could make his own decision. Besides, he’s a drummer, and his teacher wasn’t really dressed up either.

Noah and Jason took their seats at the drums. Jason warned the audience it might get loud and said, by way of explanation and to some laughter, “There’s not much we can do about that. It’s drums.” They began to play. Noah continued to look very serious as he played. They sounded good to me and I liked their composition, but I can never tell when he’s going to be satisfied with a performance and when he won’t.

The rest of the kids played, a couple in duets with their teachers. The next three performers after Noah were pianists and then there was a violinist who plays in the advanced strings ensemble at June’s school with her. A girl played “Ode to Joy” on the guitar, alongside her teacher. I’d never heard that song on guitar and it sounded a lot different, in an interesting way. Because the winter recital is often in December a few kids had prepared holiday music—we heard “Greensleeves,” “The Dreidel Song,” and “Jingle Bells.” In a music school recital first, one of the guitarists went electric and played The Kinks’ “You Really Got Me Now,” which was fun. The recital ended with a very skilled teenage violinist who played a Bach concerto.

After the recital, we asked Noah how he thought it went. Okay, he said. He didn’t have a list of errors he’d made as he sometimes does, but he didn’t seem buoyed as he is at other times by a good performance. I was glad he did it, both to practice composing and to stay in the habit of public performance.

This duo of musical events was actually supposed to be a trio, ushered in last Wednesday by June’s first full-length elementary school orchestra concert but the concert was postponed due to the snow. It’s been rescheduled for next week, so we’ll be in the audience again soon. It’s one of my favorite places to be. I love to listen to my kids play.