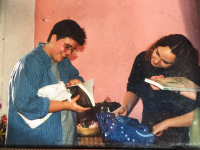 The new year got off to a bit of a rocky start. In the first two weeks after winter break, the kids had a snow day, two two-hour delays, and an early dismissal—all for three-quarters of an inch of snow, one unusually cold morning, and a little (I swear not much at all) ice on the sidewalks. It was disheartening, especially because it was a busy couple of weeks for work. I can and did work with the kids home– they’re old enough not to bother me too much when I’m working—but I just can’t concentrate as well when I’m not alone in the house, so each new cancellation or delay was frustrating. It’s possible I’ve been ruined for working in an office, after almost six and a half years of working at home.

Overall, it wasn’t a bad two weeks, though. North attended the first rehearsal for both the school play and Honors chorus. I didn’t have much post-holiday letdown and whenever I was tempted to wish we could just fast-forward through the next two months, have done with winter, and let spring come, I remembered two things. First is that Beth loves winter. Second is that Noah will leave for college in less than two years, so I really shouldn’t be wishing away any time. He’s been working on his senior year course schedule, which is why this is front of mind. I just can’t believe he’s picking courses for his last year in high school, as if that were truly happening any time soon. (Yes, I know, it is.)

Beth and I had an anniversary on Thursday. It was the twenty-sixth anniversary of our commitment ceremony and the fifth anniversary of our legal wedding. Beth’s mom posted this photo, taken in our apartment in D.C, of us opening wedding presents on Facebook. Look at us! We were practically babies. Well, twenty-four and twenty-five. I was a mere eight years older than Noah is now. Now I am trying to imagine myself at his wedding eight years hence and wondering where the baby who lived the first year of his life in that apartment with the salmon-colored wall went.

As of Tuesday, I didn’t have a gift for Beth. I’d decided to get her some gift certificates from AFI too late to order them through the mail, so I got on a bus to Silver Spring that morning and picked them up from the theater. While I was in downtown Silver Spring, I also got a mocha, lunch at BurgerFi, and spent a long time browsing for some small gifts at Whole Foods so I’d have something to wrap. I settled on treats one might eat at the movies (dark chocolate-covered almonds and milk chocolate-covered pretzels) to keep the gift thematically consistent, and got a card with a heart on the front and I was done.

Except when I got home, I opened the card and discovered it was a Valentine’s Day card. Why are these on sale already? Who buys valentines a month in advance? Clearly not me. And then I couldn’t stop thinking about another card I’d seen there, which was obviously superior. So, the next day, instead of being practical and going somewhere in Takoma for a new card, I went back to Silver Spring and got the card I wanted. It has different colored buttons all over it in the shape of a heart and it is blank inside.

Thursday I made our anniversary cake, the one we had at our commitment ceremony and at our legal wedding. It’s a spice cake, with a lemon glaze. I covered it in red and blue colored sugar. Because I didn’t leave myself quite enough time to bake a cake for forty-five minutes and scalloped potatoes for an hour at different temperatures, dinner was a little late, so Beth and I exchanged gifts before dinner rather than after. She got me Reckless Daughter, the Joni Mitchell biography that came out last fall and which I thought someone might get me for Christmas. That’s one of the advantages of a mid-January anniversary—it’s a chance to get (or give) what you didn’t get (or give) at Christmas.  North had dinner at Xavier’s, but when they got home, we all ate the cake we always eat together in mid-January and our anniversary was over.

Saturday I worked a little and Beth took North and Xavier ice skating and out to dinner, bringing back take-out for Noah and me. Yesterday, Beth, North and I went to church. We’ve never been church-goers, but recently North has become curious about church and asked recently if we could try out a Unitarian Universalist congregation. (We’ve been to UU services a few times when visiting Beth’s mom.) It was the third time Beth and North have gone to this church and the first time I went with them. There’s a part of the service called the Communion of Joys and Sorrows in which people tell the congregation about a joy or sorrow in their lives and light a candle for it. I recall Beth’s mom’s church does this, too, but with stones dropped in a bowl of water, if I’m remembering correctly.

Two of the people who shared we knew slightly. One of my colleagues from my teaching days shared that her son had won an award at college. And there was a lesbian couple who shared that one of their mothers had suffered a fall and broken an ankle and that a nephew was newly married. Beth thought one of them was a gym teacher from Noah’s middle school. Overall, there were more sorrows than joys. I asked Beth if that was always the case and she said so far yes, speculating that maybe people need more support for their sorrows or don’t want to seem to be bragging about their joys. If I’d had to share something I probably would have gone with a sorrow, too, because it was one day before the eighth anniversary of my father’s death.

I knew the day was coming and I wasn’t feeling very emotional about it. Some years I feel it keenly and some years I don’t. However, when I woke this morning, it hit me hard. I lay in bed thinking about Dad and about the fact that there’s snow coming tomorrow and Wednesday and if we get off with just an early dismissal and a two-hour delay on the affected days, we’ll be lucky. Everything seemed bleak. I didn’t particularly want to get up and I didn’t particularly want to spend two hours picking up trash around Long Branch creek, even though that’s our traditional MLK Day of Service activity. We’ve been doing it since the kids were small.

But Beth made homemade waffles, which made getting up a little more attractive and all of us except North, who was feeling under the weather, went to the woods near the creek and picked up trash and recycling, mostly beer cans and bottles. It was cold but we were moving around so it wasn’t too bad. I even got warm enough to unbutton my coat and take off my gloves, which I shouldn’t have done because I got cuts on my hands from the thorn bushes and they ended up smelling like stale beer. I also kept getting stickers in my hair, which I should have worn in a ponytail. Even with all the thorns, it was good to be focused on poking around in the brush, looking for the next can. It kept my mind off other things.

After a quick lunch at home, Beth and I went to AFI to redeem one of the gift certificates I got her for our anniversary. We saw The Post. Have you seen it yet? If not, you should as soon as you possibly can. It made me feel hopeful about journalism and democracy, and that’s no small feat these days. Now, as the fifty-year-old daughter of a journalist I must admit movies that take place largely in 1970s newsrooms are right in my nostalgic sweet spot, so you can take my recommendation with that in mind. From the movie, we went to Eggspectation for coffee and cake. I got a piece of chocolate-peanut butter Smith Island cake.

The best thing about the whole day was how it was a mostly unintentional tribute to Dad. He might not have taken part in an organized creek clean-up, not being much of a do-gooder, but he was in the habit of picking up all the trash on his block.  (I, too, often come home from walks with a tote bag full of recyclables.) He was a newspaper editor in the 1970s (and beyond) with a passion for investigative journalism and politics. He loved coffee and most desserts, but especially chocolate.

But we always do the creek clean-up on MLK day, The Post was opening this weekend and I’d just gotten Beth movie ticket certificates so it was natural we’d go see it. All the plans were made before I even thought about what day it would be. The only detail I added with him in mind was going out for cake.

My father wasn’t an easy man to get along with and we didn’t always get along, especially when I was in my late teens. But there’s no doubt that I am his daughter in many deep and lasting ways. And that’s more of a joy than a sorrow.

Note: The last photo is of a little altar my sister made for Dad today.