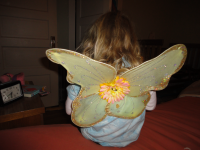 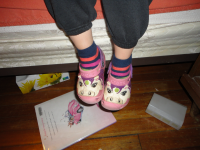 Light she was and like a fairy,
And her shoes were number nine,
Herring boxes, without topses,
Sandals were for Clementine

From “Oh my Darling, Clementine” by Percy Montrose

On Thursday evening I was lying in June’s bed, singing to her. I was just starting my second round of “John Jacob Jingleheimer Schmidt.” Instead of the actual lyrics, I have always sung my children’s first, middle and last names to this tune. In both cases the total syllable count is only one off, so it works. (This is one of the benefits of having a five-syllable hyphenated last name.)

June interrupted me. She said, “I think at night instead of singing, you could just be quiet.” Noah made a similar request when he was a little younger than June is now (while I was pregnant with her in fact) so I had been wondering how long the nightly singing would continue. Just to be sure, on Friday evening I asked her if she had wanted no singing just last night or if she wanted to make a change in the bedtime routine. She was firm—no more singing.

I could have been happy about this. I’ve been snuggling with June at bedtime for fifteen to twenty minutes a night ever since she self-weaned two years ago. Lately I’ve been feeling that it’s too long. I’d like more time for myself in the evenings and I was thinking of gradually cutting back and here she’d handed me the perfect opportunity. I had been spending five to ten minutes of that time singing to her. So now we’re down to ten minutes of silent snuggle time and it was child-initiated and completely painless. For her anyway.

I can’t help but be a bit bereft about it. Except for a brief hiatus while I waited for my new audience to be born, I’ve been singing the same six or seven bedtime songs to my kids at night for almost ten years, and as of four nights ago, I’m not doing it anymore.

So it was a pleasant surprise when June suggested we have a concert in the backyard on Saturday afternoon. We’d gone outside to try out Noah’s old metal tricycle to see if she was big enough to handle it yet now that she’s outgrown her lightweight plastic trike. It’s a really heavy old-school tricycle and while I love it aesthetically it has not turned out to be very practical because by the time the kids are big enough to ride it they’re almost past trike age. The verdict was uncertain. If Beth can fix a problem with the handlebars, I think June could ride it for a summer. If not, she’ll get her first bike for her birthday.

After riding the tricycle up and down the driveway, June suggested we play soccer. She won the game 3-0, mainly because she kept changing the rules to her own advantage. (Yes, I know. I can’t let her keep doing that but we hadn’t played with the soccer ball and net for a while and I wanted to keep her interested.) Next up on June’s agenda was t-ball. She has her heart set on playing in the Takoma Park t-ball league this summer. Beth and I have some reservations because she’s so very tiny and the players are all five and six year olds, and as we know from the summer when Noah played t-ball, mostly boys. (“Will she be able to reach the tee?” Beth wondered.) But we’re going through with it because far be it from me to tell her that she can’t play because the other kids will likely be much bigger than she is. If she’s going to play sports, that will always be true for her. And I’m certainly not going to tell her t-ball is for boys. Anyway, she wanted to practice because she’s a bit of a perfectionist and she wants to be good at it already before the practices start three months from now. And she can reach the tee, ours anyway, and she’s not half bad at hitting the ball off of it without knocking it over. Better than her brother was when he was five, that’s for sure.

Next I put her to work helping me pick up sticks a recent windstorm had shaken from the silver maple in the backyard. That was when she said, “Let’s have a concert,” and I said okay. I started to go inside because I was imagining us going to the instrument bin, each picking something to play and jamming in the living room. “No, outside,” she insisted. This was going to be a singing concert. It turns out what she wanted was to take turns sitting in one of our patio chairs and singing while the other one listened. I was to go first.

And so I found myself singing to June in the golden light of a mild late winter afternoon. After a moment’s thought I settled on “Oh my Darling Clementine.” This was never a bedtime song for us. It was a commuting song for me and Noah. When I was still teaching, I used to pick him up from the university day care and then we had an hour and half commute home on train and bus. To pass the time, we used to sing a lot. Later it was a swinging song for June. I have always sung to my kids while pushing them on the swings.

When I got to “Light she was and like a fairy/And her shoes were number nine/Herring boxes without topses/Sandals were for Clementine,” I wondered idly how much smaller women’s feet must have been when the song was written. And I was amused because my little fairy wears kids’ size nine shoes now (and 8.5 and 9.5 and 10, due to the vagaries of different brands’ sizing, but she has more nines than anything else).

When it was June’s turn she sang “Old MacDonald” with a lot of brio and then I did a couple more rounds of June’s name to the tune of “John Jacob Jingelheimer Schmidt” and she sang “Dinosaur Round” (http://www.sandraboynton.com/sboynton.com.data/Components/Music/dinosaurround.mp3) from Sandra Boynton’s Rhinoceros Tap and I sang “Swing Low, Sweet Chariot” and I don’t remember what came next. I felt less sad about the end of our bedtime concerts when we’d finished. Clearly I have some more time left to sing to my children.

Coda:
Some transitions come suddenly, as this one did. Others drag on and on and on. Potty training has been like that for us. Back in January June started pooping on the potty on an occasional basis (starting with an impressive three-day stretch that made us hope she was really on board this time). Back in September we promised her she could have a lemonade stand when she was completely trained and I worried what we’d do if it happened in the dead of winter. I’m not worried anymore. It seems likely that we’ll have spring or summer temperatures every day before I’m finished pulling soiled underwear off her on a daily basis. I can’t believe she’s almost five and not really trained. I thought surely no child without any kind of disability could train more slowly than Noah, but she’s proven me wrong.

Meanwhile we are phasing out her sleeping-through-the-night rewards because—hurray, she’s finally doing it almost every night—over 75% in January and over 90% in February for those of you keeping score at home. (I didn’t think she would start sleeping through the night regularly until she stopped napping, but clearly I was wrong about that, too, because she falls asleep every day after school and she sleeps so deeply it’s quite a chore to wake her.) In the place of the convenience store treats she got for every ten stickers on the sleep-through-the-night calendar, we are stepping up the potty rewards. On Friday I’m planning to buy her a small toy at Now and Then (http://www.mainstreettakoma.org/nowandthen) and to let her pick out at movie at Video Americain (http://www.videoamericain.com/aboutus/) as a celebration of learning to sleep through the night. Then a yet to be determined, potty-only reward system will kick in, because I have to try something new. And believe me, I will not be the least bit sad or nostalgic when we pass this milestone.