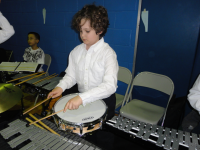 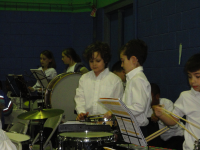 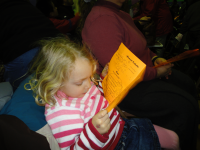 “Mommy, I’m going to poop on the potty,” June announced late yesterday morning as she slipped off her chair, leaving her lunch half-eaten on the dining room table. June’s been using the potty for pee since October, with only occasional accidents, but she very rarely has a bowel movement there. I think the last time was in November. But the last time she did it was just like this, a casual announcement and then results. Sure enough, soon she was calling me into her bedroom to see the full potty. I praised her and hugged her. It was all sincere and heartfelt, but I thought it could well be another two months before I saw what I was seeing again, so I took a good look before emptying it into the toilet and flushing it.

Several hours later, as June and I walked home from preschool she mentioned that she’d been meaning to try to stay awake all through Quiet Time (something she rarely does these days—it has basically turned into a nap by another name) so she could hear the end of the CD of songs from Disney movies. She often chooses it for Quiet Time so she’s heard the beginning many times, but she can’t remember how it ends. However, she went on, she was not going to do it today because she had remembered that Noah’s concert was tonight and she needed to take a nap so she could go.

The orchestra and band winter concert was at seven, which had presented me with a babysitting challenge. If June napped, she’d be fine to go but if she didn’t it would not have been a good idea to take her, which meant I would not know whether I needed a sitter until roughly three hours before the concert. So a couple weeks ago, I contacted our main sitter, explained the situation and offered to pay her a ten-dollar reservation fee in advance to keep the evening clear. It seemed like a good solution, but I knew June really wanted to attend the concert and I wondered if the pressure of knowing she had to sleep in order to go would keep her awake. I was actually considering relenting and letting her go even if she didn’t nap but I didn’t say it aloud.

As I was walking and puzzling over this, I was humming “Hard Rock Blues.” It’s one of the songs Noah has been practicing for weeks for the concert. I didn’t realize I was humming it until June joined in. Then we got louder and started singing “Da da da da da DUM,” to its staccato beat.

We got home and June announced she was going to poop on the potty again. She tried but couldn’t go. Then she climbed into bed, pacifier in mouth, and pulled her Cinderella blanket over herself. I started a CD (not the Disney one so she would not be tempted to stay awake). I checked on her ten minutes later, found her sound asleep and called the sitter to let her know not to come.

Noah got home at 4:25, bringing the unwelcome news that he had more homework that could be completed in an hour, which was about how much time he’d have before our early supper, clothes change, and departure for his school at 6:15. I helped him prioritize. He’d do one last pre-concert practice session and his math next because his math teacher does not accept late work and then he’d move on to the illustrations for his examples of simile and metaphor. There was more, but I doubted he’d get further than that and he didn’t. He was still doing the first illustration while I set the table. (Normally this is his chore, but I decided to give him a break.)

Around five, as Noah was drawing and I was cooking dinner, June said, “I’m going to poop on the potty now.” And she did. Well, this was an interesting and unexpected turn of events, I thought. More hugs, more praise, and then I hurried back to the broccoli, cabbage and carrots I was chopping for vegetables with rice and peanut sauce.

By 6:35, we were in the school gym, which was rapidly filling with one hundred and forty young musicians, their parents, grandparents and siblings. I was glad we’d arrived early because we got seats near the percussion section. The students were arranged in an arc of rows nestled along one of the long sides of the rectangular room and both of the short sides. The drums and glockenspiels (or bells as they call them) were on the right side of the room. I could not see many of the musicians in the front (except the clarinets) and none of the players on the left, but we could see Noah, which was the important thing. Soon all the seats were gone and there were throngs of spectators standing along the back of the room.

The room was warm with the body heat of all those people and loud with the sounds of musicians tuning up their instruments. It was strange to hear little snatches of the very familiar music Noah’s been practicing played on different instruments. I saw one of the clarinetists looking distraught and mouthing to another, “I can’t do this.”

Noah was having some trouble setting up his instruments. He needed one of the tables on wheels for his bells but there wasn’t one at the place where he was supposed to stand. He sought out the band director, but he either forgot or was too busy with other crises to help and he never came back. Beth and I noticed an unused table but it looked as if it would be difficult to maneuver it to Noah what with all the kids, chairs and instrument stands in the way. Noah unsuccessfully tried to get the director’s attention by waving his drumsticks in the air and eventually went to get him again. He returned saying the director asked him to try to move the table himself. “I’ll help you,” Beth said and got up. They managed to squeeze the table over to Noah’s area and wedge it in front of his snare drum. He would have reach over the drum and stand further away from the bells than he was accustomed to play them, but it was the best they could do.

Meanwhile June was antsy with the long wait. She was hungry and thirsty and hot and bored, she told me at various times. The day before she had imagined being at the concert and the band leader coming over and asking who she was and Noah saying, “That’s my little sister, June.” It did not seem very likely that this fantasy of being an important personage at the concert was going to come true.

She studied the program and looked at the pictures of a bear ice-skating and people throwing snowballs inside. The cover featured two blindfolded polar bears dancing a tango (I assume it was a tango because one of them had a rose in its teeth) on a very small and cracking ice floe. I thought it was an odd illustration, although in some ways an apt one for a concert of nine- to eleven-year-old musicians. So much could go wrong. June pointed to the big words on the front of the program and wanted to know what they said, “Music to Warm a Winter’s Night,” I told her.

Finally the hubbub of set-up died down and the concert began. The advanced orchestra students played two songs and then it was time for the band. They had eight songs; Noah was in three of them. They started with “Lightly Row,” that elementary school band standard. After such a long and stressful wait to start, Noah missed his cue and did not begin to play the bells until a few notes into the song, but he played the rest of it and beamed at us when it was over. The next time he played was in “Robot Assembly Line,” a composition by his band teacher, meant to evoke the noise of robots building cars in a factory. I noted how different the song sounded with all its parts and not just Noah’s. It was fun to see all the pieces coming together. The last song was “Hard Rock Blues,” which Beth said was her favorite. Before the concert started and in between songs we noticed Noah grimacing, most likely unconsciously. The tics we hadn’t seen in months seemed to be re-surfacing temporarily under stress. But after each song was over, he flashed us a brilliant smile.

The orchestra was up next. Their section was called “Winter Poems Suite.” Each song was preceded by a poem, read by a different student. It was a good idea but I wish the kids had access to a microphone or that the text of the poems had been passed out with the programs because even though I closed my eyes and strained to hear I could only catch a few lines of each poem. The only exception was Sara Teasdale’s poem “Night,” which I could follow only because I have it almost by heart.

Stars over snow,
And in the west a planet
Swinging below a star—
Look for a lovely thing and you will find it,
It is not far—
It never will be far.

I love this poem. It was a treat to hear it. June was less delighted. She had been interested to see Noah play but now that he was finished she was ready to go home. She mentioned this a few times, and also asked me questions like “Where do seeds come from?” and then something about evolution as I repeatedly said, “We’re listening to the music now. We can talk about that later.”

When the advanced band came on, I told her “Three more songs,” and she counted them down as each song ended. I reminded her Noah would have to pack up his percussion kit before we could leave, but he was mercifully quick.

Once he was ready to go, I gave him a hug and a kiss on the forehead, which he tolerated better than usual (he likes hugs but not kisses). He even smiled at me. “Congratulations on your first concert,’ I said.

“Was it my first concert?” he asked. It was his first since he was three and played “Twinkle, Twinkle” at a Suzuki concert, I told him. Tonight was the first concert he was likely to remember, anyway, and it had been a success.

It was 8:40 by the time we got home, so we rushed through the kids’ bedtime routine. Noah was wound up and June was tired and they fell to squabbling with each other. I started to fret over his unfinished homework but I made myself stop. Look for a lovely thing, I told myself. There had been plenty this day. I could take my pick.

In the morning Noah finished some, though not all, of his undone homework and June did her new potty trick two more times and then once more in the afternoon.

It is not far. It will never be far.