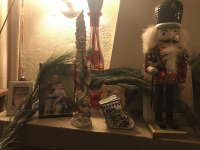 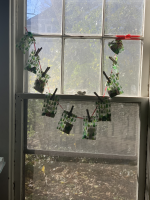 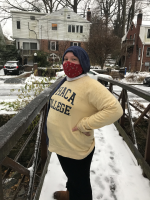 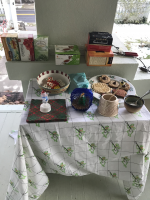 You think I’d be used to things not happening by this point in the pandemic, but I’m finding I miss the usual busyness of this time of year, the school concerts and plays and holiday parties. I feel like Mrs. Claus in The Year Without a Santa Claus when she complains to Santa about the lack of seasonal activity, saying “it just isn’t natural this time of year.”

Of course, we have not been completely idle or really very idle at all. Beth’s very busy with work and I’ve been less busy but also working, and the kids have been attending classes, or in Noah’s case, taking finals. He had his last two classes on Monday and because Ithaca has no reading period, he dived right into finals the next day. He had a presentation in his audio production class on Tuesday, a computer science exam on Wednesday, another assignment for that class on Thursday, and asynchronous philosophy exam and an essay for ethnomathematics both due on Friday. I excused him from most of his chores during the last week of class and exams week, so North had to clean the kitchen and I had to clean the bathroom and sweep the porch. The fact that this felt unusual shows how much I’ve gotten used to his help around the house since he’s been home.

We’ve also been decorating and baking. Beth started putting up the outside lights last weekend and finished this weekend and she and North decorated the living room with pine garlands, strings of lights, candles, and various nutcracker, Santa, and snowmen figures. I made gingerbread dough last Sunday and baked a tray of cookies, then Beth and North helped cut and decorate two more on Monday. I froze the rest of the dough so we can take it with us to Blackwater Falls State Park, where we’ll be spending Christmas. Meanwhile, Beth and North made pizzelles, and North and I made peanut butter cookies with Hershey’s kisses and buckeyes. We were planning to give away cookies and candy, so we baked earlier than usual.

North’s been engaged in various holiday-related craft projects. Last month when the long-delayed Billie Eilish concert that was supposed to be their birthday present back in March was finally cancelled, we got them a replacement for their old 3D pen as belated birthday present. They’d recently started using the old pen, which had been lost for years, when Noah reorganized his bedroom (which used to be North’s room) and found it, but then it broke shortly after they starting making things with it again, so a new one seemed like a good gift. When it broke they were right in the middle of making a model of the Eiffel Tower and the surrounding park and after they got the new one and finished that they started making ornaments and other little holiday trinkets.

North also made ten-day Advent calendars for everyone with little treats or gifts in each bag. On Tuesday, the first day, I got a dark chocolate square and a mini Reese’s peanut butter cup, Noah got a couple peanut butter cups and a Hershey’s miniature, and Beth got a blue ornament of West Virginia with a gold heart in the center that North had made with the 3D pen and it went on that way. On the third day, I got a packet of salted caramel-flavored sugar from a tea and spice shop I like and on the fifth day, some coffee scrub soap, purchased in Rehoboth over Thanksgiving at our (and Joe Biden’s) favorite soap shop.

It snowed Wednesday, the first snow of the year, unless you count some flurries the week before. We got about an inch and a half before it turned to freezing rain, but it was pretty and novel. I took two walks that day, my normal morning walk just as it was starting to snow, and a shorter walk with North in the afternoon. That was a soggy walk as the snow had turned to rain by that point and the snow on the ground on the path by the creek was slushy and muddy. But North walked fifteen or twenty minutes without any mobility devices, which was encouraging.

When we came home I shoveled the walk so the slush wouldn’t refreeze overnight and then North braided my hair while I worked a little, trying not move my head too much as I looked back and forth from computer screen to printouts. Then North and I made bulgur chili for dinner and peanut butter cookies to add to our stockpile of sweets. After dinner, Beth and I divided up the three kinds of cookies for distribution to friends. I thought we had a lot, but once we started filling up bags and tins, the pile dwindled quickly.

Thursday my friend (and North’s preschool music teacher) Becky came over for a porch visit. I made tea and set out three kinds of cookies. The day was cold but sunny and our yard was bright with snow, so it was nice to sit outside and talk and catch up.  Becky’s been working as Zoom coordinator, overseeing online school for two first graders and organizing activities for them when they’re not in class so their parents can work. That was interesting to hear about. Just before she left, our Christmas lights came on, giving the twilight a cheery feel.

Friday Noah finished his last exam so we had time to watch a Christmas movie that night. This set off a long discussion over our pizza dinner about what Christmas specials and movies we would watch this year and when because there are a lot in our regular rotation, and North doesn’t like to watch them after Christmas, but also wanted to watch one (The Polar Express) that’s not in the watch-every-year family canon that night. Noah argued we should watch all the obligatory ones first to make sure we don’t miss any. So Beth got out a piece of paper and wrote down all the specials and movies and all the available time slots between now and Christmas and determined we could make it work. Interestingly, there’s no disagreement about what’s in the canon and what’s not. So we watched The Polar Express.

Saturday afternoon we went for a long drive, going from house to house dropping off cookies and buckeyes. We went to the houses of two of North’s friends (Zoë and the twins Miles and Maddie), where North got out of the car and had five-minute outside visits with them, exchanging gifts as well as dropping off sweets. We also left some on the doorsteps of several other family friends. As our final stop, we got warm drinks, lemon cake, and chocolate toffee almonds from Peet’s. Noah and I made a cheesy spaghetti pie for dinner, which was very popular, and then we watched The Year Without a Santa Claus, which is canonical.

Today Beth did a huge grocery shopping so she can minimize time spent in the grocery store in West Virginia and I finished a batch of get-out-the-vote postcards for the Georgia Senate runoffs. It put me over my year-end goal of one thousand postcards since September 2018, when I started writing for Postcards for Voters. Rudolph The Red-Nosed Reindeer, also canonical, is tonight’s entertainment.

We’re leaving for Blackwater in a few days, but before then I’m having my friend Ellen from book club over for tea and some buckeyes I set aside for her porch visit. And North is planning to make a special dinner for Yule—a soup made with tomatoes and oranges (red and orange ingredients to honor the return of the sun), a cranberry-apple drink and honey cakes for dessert. North’s been a pagan since last February and sometime between the election and Thanksgiving they decided to start covering their hair (which they’re growing out) as a religious observance, in case any of you who’ve seen photos on Facebook in the past month were wondering about that. We will also be opening some of our Christmas gifts that night so we can fit everything in the car and to mark the holiday.

Happy Solstice! May the new season bring you health and happiness.