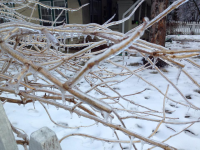 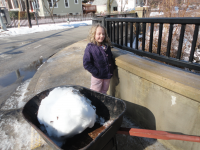 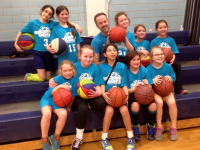 I don’t even know what to say about the last few weeks. The last week of February was difficult and the first week of March was worse.

The last Thursday of February Beth and June and I attended a memorial service for a forty-four-year-old woman who died of breast cancer. We did not know her well, but she was the mother of one of June’s preschool classmates, a girl who also played on a soccer team with June in first grade and on her basketball team from kindergarten to second grade. Grief would be too strong a word to use because we weren’t friends, but her death did make me very sad, for her not being able to see her children grow up, for her widowed husband, and most of all for her four girls, aged six to twelve.

And then there was the weather. In the space of two weeks school was cancelled on four days, not to mention a two-hour delay and an early dismissal. (That last one was scheduled, at least.) This brought us to seven cancellations for the year, three over what’s built into the school year. And even though the school district promised to make the days up this year, they’ve gone back on that and applied for a waiver from the state, which means my consolation prize of three days of uninterrupted work in mid-June might not come to pass either. We’ll see.

When a friend asked on Facebook why a few of us stay-at-home and work-at-home moms were complaining so bitterly about the days off, I answered:

It’s the disruption of trying to work with kids at home, it’s needing to decide which of the things other than work that I usually do that I am not going to do, it’s the loss of quiet time that’s important for me as an introvert, it’s the fact that I also lose the chance to recharge through exercise when the pool at PBES is closed or through socializing with other adults when basketball practice or my book club is cancelled…And this is unique to me, but it brings back my grief for my father because he died shortly before the big storms of 2010.

This is what I meant about my father. It doesn’t happen every time school is suddenly closed, but when we have a great many cancellations in quick succession, it often brings me back to the-world-is-spinning-out-of-control feeling I had in the winter of 2010, when the kids missed two and three weeks of school respectively. (June was in morning preschool then and if the school district had a two-hour delay, her whole day was cancelled.) The bulk of those storms happened the month after my dad died and it’s clear that these two events got cemented together in my mind in a way that makes me overreact to the real but honestly not dire inconvenience of having the kids at home on a workday. I understand it’s not quite rational but that doesn’t change it. Add some painful private difficulties to the mix and I haven’t been much fun lately.

But so far I haven’t had a day as bad as Saint Patrick’s Day last year (our tenth and last cancelled day that year). I spent that day mostly in bed, with the blinds drawn, listening to an audiobook–and to make matters worse, it a pretty bad audiobook. I was afraid all this winter of going back to that place and I thought I had around two weeks ago, on the first Monday of March.

We’d had an ice storm and school was cancelled. I’d woken at 5:45, sore all over from having spent two hours the previous afternoon chipping ice off our sidewalk, but at 9:00, I was still in bed and I hadn’t eaten breakfast. It wasn’t that I wasn’t hungry. Getting out of bed and getting myself something to eat just seemed too daunting. I finally did get up, though, by focusing on the goal of putting a load of laundry in the washer. I decided to get the newspaper while I was at it and bring it back to bed. When I went outside at first I thought it was raining, which was strange because it was a bright, sunny day. Then I noticed that when I wasn’t standing under a tree it wasn’t raining and I realized it was water dripping from the rapidly melting ice. It was such a strange phenomenon I called June outside and we walked all over the sunny, sparkly, ice-covered yard, looking at every twig and every tall weed outlined as if in glass and listening to the water patter on the frozen ground and the ice breaking and falling off the tree limbs and the shrubbery and the clothes line.

Startled out my lethargy, I decided to eat breakfast instead of going back to bed and told June I was going to the creek to do something and asked if she wanted to go. What was I going to do? Come and see, I said and then I went back to the front yard and filled the wheelbarrow. Noah, watching from the porch in his pajamas, guessed correctly. “Are you going to dump that in the creek?” he said.

June did come with me, half amused and half embarrassed, as I pushed the wheelbarrow a block from our house and then she watched, bemused, as I heaved the contents over the railing of the bridge. She told me I was “completely insane.” Perhaps, but I felt better enough to muddle through with my day and not to go completely off the rails when school was cancelled again on Thursday and Friday. Though when Beth took June to work with her on Friday I really wasn’t sure if she did it because June likes to go to work with her, or to give me a chance to work in a quieter house, or because she wanted to spare June from me because I was still in a pretty bad mood. She didn’t say and I didn’t ask.

On that day, after I finished working, I walked to the library to return a book and while cutting across the campus of the university near our house I saw ten robins crowded onto a strip of exposed grass and mud over what must have been a warm underground pipe. Two days later on the same campus, I saw two clumps of crocuses, yellow and purple, almost a month later than they usually emerge, but there nonetheless. And now, after a week of warm weather, we have crocuses in our yard, too, and hyacinth and daffodils poking their way out of the newly visible ground.

Over the course of last week, life slowly settled back into its usual groove. The kids went to school five days in a row. I swam on Sunday and had a book club meeting on Wednesday. June had a violin lesson, a Girl Scout meeting, a basketball practice, gymnastics class and a basketball game. Nothing was cancelled. Although I appreciate this normalcy, I still feel tender and exhausted. I have a mistrustful feeling about it, like I’m waiting for the other shoe to drop.

The change to Daylight Saving Time, which has seemed easier in recent years as the kids get older, seemed very hard this year. I’ve been tired all week, and I’m not the only one. On Friday night June put herself to bed, fully clothed and without telling us. I only discovered her fast asleep when I went to tell her to get ready for bed.

The Pandas’ last game was yesterday. They lost, which was not surprising as they lost every game this season. Their defense is pretty good and while four or five players are on the verge of becoming good offensive players, they have no one who can consistently score, and if you can’t score, you can’t win. Mike, their coach, has somehow remained positive and encouraging through all this, and for the most part the girls have been positive, too. I mean, look at the picture. It was taken right after the end of the last game. Do they look discouraged?

They’re eight and nine years old and while some of them want to win, some of them just want to have a good time. Plus they were on their way to an end-of-season party (graciously hosted by Talia’s family) and they were excited about that. They live more in the moment than I do. I know June was very solemn at the memorial service and sad at the death of her friend’s mother, but I don’t think it touched her too deeply. It’s harder for me now not to be touched by things like that, even when they’re peripheral to my life.

My book club is reading Anna Karenina and I found when I got up to the part when she confesses her affair to her husband, it seemed so much sadder to me than when I read it as a grad student. It was the whole situation–Alexei’s pain, the way he hides it (from himself and Anna), which leads her to read him as cold and uncaring, which makes her think she might as well tell him what he already half-suspects and desperately wants not to know for certain. I felt so sorry for both of them…I think I read more emotionally now, maybe because I’ve been out of academia for almost a decade and I no longer worry about being sufficiently detached and theoretical. Or it could just be that I’m middle-aged and I’ve seen more of life and what it does to people.

I don’t think I’ll end up throwing myself under a train any time soon, though. I have children to raise, after all, and daffodils coming up in my yard.