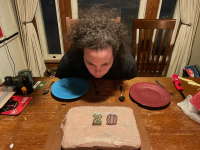 So the years spin by and now the boy is twenty
Though his dreams have lost some grandeur coming true
There’ll be new dreams, maybe better dreams and plenty
Before the last revolving year is through

From “The Circle Game,” by Joni Mitchell

Noah’s twenty, as in two decades, as in not a teenager any more. I’ll let that sink in for a moment. Okay. Ready to proceed?

This is how I opened Noah’s birthday blog post last year:

So, back in the Before Times, we thought it was sad Noah would be at school for his nineteenth birthday and we were wondering whether to order him a cake from a local bakery or if it would be better to have the cake late, but at home, where we could all partake. So, that’s a decision we won’t have to make until next spring. (He’ll be at school a year from now, right?)

Well, that decision got kicked back another year. Noah’s at home, has been at home for almost fourteen months. And it does seem as if his college experience has lost some grandeur coming true so far, but there are two years left and he will be back on campus next year. He’s registered for classes and he has a housing assignment. He’s taking Cinema Production II, Media Law and Politics, Utopias and Dystopias in Emerging Media, and Band for non-music majors.

The loss of a year plus half a semester on campus makes me glad we encouraged him not to graduate in three years. He had enough AP credit to do it, but the timing of the required classes for his major would have made it difficult. All that work taking AP classes in high school wasn’t for nothing, though. It got some requirements out of the way and allowed him to take the classes he wanted to take right off the bat, plus he can take a slightly lighter class load, which is good for our deep but slow thinker. His thirteen-credit schedule for next semester reminds me of when he was in seventh grade and having a challenging year academically and Beth asked him what his ideal class schedule would be and he said, “All media and band.” So, eight years later, he’ll be living the dream.

He’ll be living in an on-campus apartment with a roommate. He’s never met the roommate– they were matched by the college. All he knows about him is that he’s a non-smoker from New Jersey. It will be nice for him to have a little more space and a kitchen, though he’s going to stay on the meal plan at least for the fall semester.

Noah’s birthday was yesterday. The timing wasn’t ideal. It’s the last week of classes before finals and Monday is his busiest day. All four of his classes meet, the first one starting at nine a.m. and the last one finishing at 8:30 p.m., so it makes for a long day. In the morning I asked him if he thought he could take a break to go for a walk get his Starbucks birthday reward from the one closest to our house and he said no, so I offered to pick it up for him if he ordered it on the app, as I had to go to the post office and that would take me near a different Starbucks. While I was there getting his guava-passionfruit drink and lemon pound cake, I got myself a birthday cake pop, because it was someone’s birthday, if not mine. But I didn’t get a drink because I wanted to get a Thai iced tea from Kin-Da. Beth and I had Thai for dinner the night I went into labor with Noah (two decades ago!) and now I have Thai food on or near his birthday whenever I can. Since I can no longer have caffeinated drinks at dinner if I want to sleep at night, I usually steer clear of Thai iced tea, even though I am fond of it. So I was pleased to have an opportunity to have it around noon instead.

Around 5:35, at my encouragement, Noah took a study break and went down to the basement to practice his drums for twenty minutes. He’s taking online lessons at the local music school and doesn’t practice as much as when he was in a highly ranked high school band with a driven teacher, but I’m always glad when he does because I think it’s good stress relief for him.

For dinner we got takeout from Noodles and Company because it’s one of Noah’s favorites. I got the Pad Thai, of course. He got buttered noodles with broccoli and tofu, which is his standard order (well, sometimes he gets carrots instead of broccoli). Then he opened his presents. He got a fancy tripod with flexible legs that you can wrap around irregularly shaped things like tree branches, gift cards for Amazon, Starbucks, and Panera, and five books: The Magicians trilogy, (which I thought would be fun, since we watched the television series early in the pandemic), the second book in Terry Pratchett’s Discworld series, and The Space Between Worlds. When we were done, he went back into his room to attend his last class of the day.

After he emerged, we had cake and ice cream. Beth made the cake, chocolate with fresh strawberry frosting, a family favorite, and North frosted it. It was delicious, as always. My mom, who has now been a grandmother for two decades, called to convey her birthday greetings shortly after we finished eating.

Noah got his second shot last Friday (in the Ravens’ stadium again), so by the time he’s finished his finals a week and a half from now, he’ll be fully vaccinated. He’ll be heading out to Wheeling to visit Beth’s mom until Memorial Day for some well-deserved R&R.

When he gets back, I hope he leaves the house more often than he has been. At the very least he’s got some money to spend at Starbucks and Panera. I also hope we’ll go back to hiking in nearby parks and flying the drone on the weekends like we did last summer and fall because I really enjoyed that, and he did, too. And he may have a summer job, assisting the local filmmaker who he worked with on Hugo Cabret’s Big Fix last fall. Mike is married to one of Beth’s colleagues at CWA and Noah’s worked with him on a few other small projects over the last several years, starting with filming the CWA contingent at the Women’s March in 2017. When Beth ran into Mike at a rally in support of the PRO Act (to protect the right to organize) last weekend, Mike said he was short-handed and he thought he could employ Noah. It’s not for sure yet, but I’m hoping it works out. It sounds like the perfect way to spend his last few months at home.

And when he goes back to school, he’ll have new dreams, maybe better dreams to pursue.