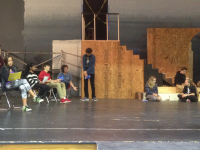 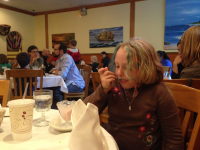 The kids are seven weeks into the school year and they’ve settled into the routines of fourth and ninth grade. We got their mid-quarter progress reports a couple weeks ago and they’re both doing well. We’re still trying to get some accommodations for Noah’s ADHD and processing issues, but so far all we’ve done is go to meetings. No decision has been made, but the school officials seem skeptical given his good grades. What we’re trying to get across is that getting those good grades comes at a steep price for him—that school is basically his whole life. Taking another tack, he has also recently started on some medication we’re hoping might help him get his school work done more quickly, but this week he’s on a half dose to acclimate and make sure he doesn’t suffer any side effects. He hasn’t had any, but we also haven’t seen any benefits at this low dose.

June’s very involved with extracurricular activities at school. In addition to orchestra and choir, she’s joined the student leadership club and the recycling crew. The only reason she’s not on the safety patrol (the kids who help out at crosswalks) is because she missed the deadline for turning in the form last year.

Beth’s on a mission to talk Noah into trying a club. It’s part of our greater Noah-Should-Do-Something-Besides-Schoolwork project. There’s an apps club that sounds like it would be right up his alley but when Beth texted him “Did you check out the clubs?” on the day the clubs all had tables at lunch, he texted back, “Couldn’t find the one where you get to stay home and not interact with people.” She hasn’t given up, but for now, he’s not doing anything outside his classwork. He is considering private drum lessons since he’s not in band this year. I’m hoping to get him into a session at the music school that starts in early November.

Meanwhile, Beth and I are involved with their schools, too. Beth has joined the PTSA board at the high school and is doing a lot of web site work for them. I volunteered to compile study packets for the GeoBowl at the elementary school and I will probably volunteer again to correct the packets or to grade the qualifying quizzes when the kids take them in November.

We spent a good bit of Columbus Day at the kids’ schools because they were having Open Houses. June’s school was open for parents for an hour in the morning and another hour in the afternoon. We decided to attend the morning hour because Noah has all his CAP classes in the afternoon and those were the ones we wanted to see most. June has math in the morning and now that she’s in compacted math, she takes it in English, so Beth would be able to follow the lesson.

We walked to school with June, arriving around 8:55, and waited outside the school until parents were allowed to come in and start lining up to sign the visitors’ log. Then we headed out to the trailers. June had all her classes in the portable classrooms in third grade and she was hoping to be back in the main building this year, but she has all her morning classes—math, Spanish, and science—out there.

The lesson was on finding the perimeter and area of a rectangle. Ms. O coached them into figuring out the formula for area (they had done the one for perimeter the previous week). They watched a video about perimeter and area in the context of farmers’ fields and she gave them a word problem to solve in pairs. When they were done they discussed the different strategies they had used to answer the question, which boiled down to 108 divided by 12. Some kids did it by long division; some multiplied different numbers by 12 until they came up with 108. Some subtracted 12 from 108 over and over until they came up with zero and counted how many times they had subtracted, while others did the same with addition, starting at zero and working up to 108. One boy drew a grid and kept adding rows to it until he had 108 squares. Ms. O praised most of the strategies, though she noted the grid might not be the most time-efficient way to solve the problem.

While the kids were working, Ms. O took small groups of them aside to talk through more problems involving a hotel room and its crown molding (perimeter) and wall-to-wall carpeting (area). During a down moment, I went over to the science corner and looked at the snail and fish habitats they’ve made from soda bottles. June’s been begging to bring hers home at the end of the unit and I wanted to get a look at it.

The lesson seemed well thought out and at the students’ level (though the instructional quality of the video wasn’t great). But the whole time I was trying to put out of my mind the teaching I’d witnessed at the HGC, the spark and passion I just wasn’t seeing in June’s class. This was made more difficult by the fact that we saw the HGC bus pulling away from her school with the face of one of her friends in the window as we were arriving. But I don’t think June shares my sadness about this. She seems to have moved on and is getting the most out of what her school has to offer, which is a good thing.

Another thing Beth and I both noticed immediately about June’s classroom was that all of her friends in the class—and one girl with whom she’s clashed for years—were together at one group of desks and she was in another with another girl I didn’t recognize and four boys. We asked her after school if they chose their seats or if Ms. O assigned them. June said they chose on the first day of school and that she chose hers because it had the best view of the Promethean board (an interactive, computerized white board). Beth and I had other ideas about why she might not have wanted to sit at the all-girl table. We both thought it was probably a good decision. I asked June about the girl who sits next to her and she said she’s never had a class with her before but she’s nice. I was glad to hear that.

Beth and I had lunch at Lebanese Taverna, where we saw the parents of Noah’s best friend from preschool—his folks had just finished a visit to a middle school and the high school. Noah and Ethan are actually in the same algebra class now, but since they haven’t been in the same school since they were five and Noah’s not good at remembering people from his past, he has no memory of his old buddy, which I find a little sad.

Next we headed to Noah’s school. While they normally have half their classes each day on an alternating schedule, that day all classes met, so parents could see whichever ones they wanted. We attended four of his seven classes—Photography, American History, English, and Drama.

The photography class was a lecture on how to remove the background from a photo in Photoshop. It was much too basic for Noah, who’s finding a lot of the class too easy because he’s already had three years of Media classes and some kids are starting from scratch. As a result, he’s been informally tutoring other kids, which is nice and I’m not going to complain about an easy class, given the rest of his workload. The teacher then introduced the next assignment, which is to make a cover for a tabloid magazine. He showed them some covers from the Weekly World News. The parents and the kids laughed at different ones, I noticed. “Is Dick Cheney a Robot?” was popular with the middle-aged set. (Later Noah asked us, “Who’s Dick Cheney?”) The stories on the kids’ tabloids are supposed to be about teachers and students at their school, so he advised them to tone them down a little and specifically forbade them from using the term “love slave,” which isn’t an instruction you get very often from a high school teacher.

American History was a lesson on nineteenth-century immigration. In addition to the teacher’s lecture, they watched a clip from Fiddler on the Roof and the teacher read them part of a piece from Sunday’s Washington Post Outlook section on the history of Italian-Americans’ assimilation process (it was a Columbus Day-themed piece). The kids seemed engaged and the teacher did, too.

In English, the teacher gave a Power Point presentation on some conventions of vampire literature because she wanted to make the point that in some ways, Maggie, A Girl of the Streets, as a story of female victimization, follows them. As someone who used to teach a month-long unit on vampires in a college class on horror, and who is kind of fond of Maggie, I found that interesting. She made the fatal flaw of not having read Twilight, though, and some of the students let her know how current vampire lit is departing from the norms. This may have lessened her credibility. I’m not sure. I haven’t taught horror since 2005 and I haven’t read Twilight either.

Drama was the last class. The class started in a cozy, bookshelf-lined room with a little stage at the end. I knew they were going to practice scenes from A Glass Menagerie and All My Sons during that class so I thought they’d be on the small stage, but the teacher took them to the stage of the school auditorium, which you can access directly from their classroom, instead. There she had them do some exercises to focus on physicality-they were supposed to walk around stage the way their character would, gesture the way they would, etc. Finally they broke out into groups and started practicing their lines. Noah’s doing a scene from All My Sons with another boy but they were pretty far backstage so I couldn’t hear much of their practice. I could hear a couple groups doing Glass Menagerie scenes better. It looked like a fun class and a good way to end the day.

We drove Noah home and a couple hours later—all of us but Noah who stayed home to work—went to El Golfo, which was holding a fundraiser for June’s school. We saw Ms. G, June’s English/Social Studies teacher there, but we were there early so Beth could go to the high school for a PTSA board meeting and we didn’t see a lot of families we know. Nonetheless, it was a good time. I always enjoy eating spinach enchiladas and tres leches cake and doing a good deed at the same time.

Back at home, Noah read and outlined a section in his history book about immigration and June took a shower. Beth got home from her meeting shortly after June had gone to bed, so she poked her head into the bedroom to say goodnight after a long day of all of us being out to school.