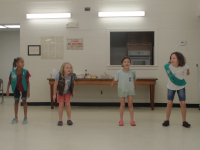 A week ago, on a Friday morning, I woke a little after six to June saying, “I can talk! I can talk!” in the hall outside my bedroom. Her voice was a little croaky, higher pitched than it usually is, and quieter but it was definitely talking, not whispering. My sister called two days later to ask for “the story of how June started talking again” and I had to tell her there was no story. I’m not sure what precipitated the return of her voice, but then again I’m not really sure why she stopped talking in the first place.

I had actually started to lose confidence in the Mean Girl theory because things did get better between June and her former friend at school and there was no noticeable change, at least not for over a week. So maybe that was it and maybe it wasn’t. Maybe it just took a week for her to feel relaxed about it.

In any case, she was excited to go to school Friday and I was relieved that she came home that afternoon still talking. That night we attended a carnival at her school and in between eating pupusas and gelato and watching her jump on the moon bounce I talked to her morning teacher who praised June for finding ways to participate during the six weeks when she wasn’t speaking. By Saturday afternoon, June’s voice was more or less back to normal. We’d made an appointment with a voice therapist at Children’s Hospital for next week. We haven’t cancelled it yet, just in case, but I’m hoping we can. It seems what Beth dubbed June’s “silent spring” is over.

Saturday June asked if she could go to the playground by herself. This is a new privilege I’d been on the verge of giving her when she lost her voice but I’d told her I wasn’t comfortable with her walking around alone by herself until she could talk, in case she needed to interact with someone. Her voice was still a little soft and squeaky then, but I said yes, because I thought she could use the positive reinforcement. She went to the playground Saturday, Sunday, Monday, and Tuesday, sometimes for hours. I asked her what she did and she said played and read a book.

The next Tuesday was June’s last Girl Scout meeting of the year. It was near the end of a six-day business trip Beth took to Detroit, so I was a little frazzled and forgot it was a parents-invited potluck until that morning. I decided rather than go out and buy ingredients for something I’d see what we had on hand. I’d been planning to make kale quesadillas for dinner anyway and we had two blocks of cheddar and an unopened package of tortillas. I picked nearly all the kale we had in the garden but once I sautéed it, it had cooked down so much, I decided just to make two quesadillas with kale and save them for home consumption and take a plate of eight plain ones cut into small wedges to the potluck.

When we arrived I noticed June’s the only third grader still wearing a Brownie vest. The timing of the bridging ceremony means the third-graders have been in kind of weird Brownie/Junior limbo since late March. Most of them have switched to Junior vests or sashes but some are evading the problem by not wearing any uniform elements at all. The badges they’re earing are still triangular Brownie badges, not circular Junior badges, though, so they can’t put them on their new uniforms and it’s hard to know what to do with them.

We ate macaroni and cheese and fruit salad and green-dyed devilled eggs and other dishes. Then there was ice cream and a green-frosted cake. I told June that my chocolate ice cream and cake were in Brownie and Junior colors. The eating and chatting went on a good bit longer than I expected. If I’d known, I might have tried to sit closer to the group of adults at the other end of our table.

Finally it was time to watch two groups of third-grade girls, including June, do dance routines they’d worked up for a dancing badge. The dance was the main reason I came to the potluck. I’d considered staying home and supervising Noah’s studying—it was exam week—but I’d been doing a lot of that recently and June wanted me to come so I did. She hadn’t told me much about the routine so I was surprised when the CD started and it was “I’m a Believer,” sadly not the Monkees’ version, but a remake. Still, that earworm is going to last a while. The dance was cute. The second dance routine was to an Irish jig and very well done.

The leader called the girls up next for earned badges and pins and for some reason everyone got slippers, too. Maybe it was an end of the year present from the leader? In any case, June is quite happy with them.

June had a violin lesson on Wednesday. Her teacher, who is quite talkative herself and has been very sympathetic to June’s plight—to the point of whispering in solidarity herself during June’s first voiceless lesson– was very happy to hear her voice again. “When June’s not talking, the world just doesn’t seem right,” she said.

Tuesday was field day. June said it was fun but had nothing else to report about it. While June’s morning class has been plowing ahead with math—they even had a test today, the second to last day of school– by Thursday June’s afternoon teacher seemed to have given up entirely on instruction. They whole third grade had pajama parties in their English classes that day. They wore pajamas to school and brought blankets, stuffed animals, and a book to read. Then they made little nests for themselves and read for an hour. It sounds like my kind of party.

There was another party today, one with a movie and popsicles, which caused Noah to say June was “a party girl.” Elementary school often ends this way, rather than with a flurry of exams. But this year it seemed like there was more than the end of another school year to celebrate. We’re all glad our party girl has her voice back.