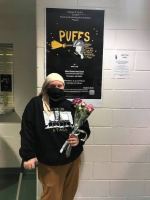 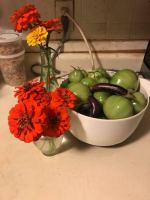 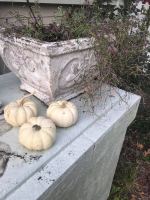 It’s been a week of small milestones.

Firstly, thanks for the well wishes for my mom. She’s been back home since Tuesday. She and Sara managed the drive home from Seattle in one day so they didn’t have to stay in a motel. Mom has an inclining bed she got when she got her hips replaced years back and she thought that would be more comfortable. Jon has moved in with her and her friends are bringing meals to the house. She can get around with a walker and is looking forward to getting out of the house soon, though she hasn’t tried it yet.

Noah’s half birthday was also on Tuesday. Ever since the kids were toddlers we’ve gotten them cupcakes on their half-birthdays and Noah’s first year of college we had cupcakes from a bakery in Ithaca delivered to his dorm. And of course, last year he was home, so we had grocery store cupcakes while half of us watched and half of us avoided watching the Presidential election results. That was a nail biter, wasn’t it? Hard to believe it was only a year ago. Anyway, I ordered cupcakes from the same bakery in Ithaca—one chocolate, one vanilla, and one carrot cake– with the numerals 2, 0, and .5 written in the frosting.

I’ve been wondering for a while how long this half-birthday cupcake tradition will last. I’ve thought maybe until each kid graduates from college, but next year if all goes as planned Noah will be in Australia (or possibly Scotland) in the fall and getting cupcakes to another continent or paying for delivery from a local bakery in foreign currency seems like a logistical challenge, so maybe this was the last hurray for him.

Later in the week, the weather took a turn and we had a couple nights just below freezing. We turned on the heat, I put flannel sheets on our bed, and Beth and I brought in the vulnerable garden produce. We had pots of chives, mint, rosemary, and thyme on the kitchen floor for a couple days until it got warmer and I took everything back outside. I picked most of the zinnias and split them into two bouquets for my desk and the dining room table. The few I left survived the frost, so I may have acted prematurely. They are cheerful, though, and the first day they had a sweet smell I’ve never noticed outside. Beth and I also picked the last of the eggplant and an enormous amount of green tomatoes, searching the sprawling plants with a flashlight after dark. We’ve never had so many green tomatoes—the ones in the picture are only about half of them—and we’re not quite sure what we’re going to do with them, but we’ve been eating them diced in scrambled eggs, and Beth fried some for dinner tonight and I am going to stuff some with cheese and breadcrumbs for dinner Tuesday, and I guess we’ll make a big batch of salsa verde. If you have a favorite way to eat green tomatoes that’s not too high-carb, feel free to chime in.

Beth recently got an Apple watch and so I inherited her Fitbit. I started wearing it Friday evening and I can see why people get obsessed with their steps. I did not make my goal on Saturday, the first full day I was wearing it, and I was surprised because Beth and I spent an hour and twenty minutes taking down our Halloween decorations and packing them in boxes and carrying those boxes down to the basement, which I thought would entail more steps than it did. But today I had a library book to return and it was a nice day so I walked there and later I mowed the front yard one last time and I reached the step goal in the late afternoon. Pro tip: take off your Fitbit if you are trying to take a nap so it doesn’t vibrate and ask you to get up and walk 166 steps to complete an hourly goal.

The school play, Puffs, is in the middle of its run. There were two shows this weekend and there will be three next weekend. North was at rehearsal until ten o’clock for four nights in the days leading up to opening night, even on Thursday, which was a day off school because it was the day between first and second quarter, which is a grading day for teachers.

We went to the show on Saturday night and brought North’s friends Norma, Miles, and Maddy. (We’d made a donation to the theater program and we got some free tickets.) The play’s subtitle is Seven Increasingly Eventful Years at a Certain School of Magic and Magic. It’s the Harry Potter story as imagined from the point of view of the Hufflepuffs (some original characters like Cedric Diggory, but mostly new ones). It’s a fun show, especially if you’re familiar with the books. I read them first on my own and then to both kids when they were nine or ten, but Beth has not read them and though we’ve seen the films, the plot is not really in her head, so she was often lost. Of course we paid attention to the costumes because North was the costumes manager. Since the Harry Potter series takes place in the 90s, there was a lot of flannel and scrunchies. It’s kind of a shame North will never get to see the play in its entirety because they’re always backstage helping with costume changes.

Today they enjoyed some downtime at home, with no show or rehearsal. There’s a touch up rehearsal on Wednesday afternoon, but they don’t have to stay late. We’re all glad about this, but especially Beth because North’s school is a half hour from our house and Beth’s been doing a lot of driving up and down University Boulevard to drop them off and pick them up.

The normalcy of North being involved with a full-length play for the first time since 2019 has been comforting. In another cheering development, I’ve enjoyed seeing pictures on Facebook of your under-twelves getting vaccinated this week. It’s nice to think of your specific kids being protected and the increased protection everyone will gain from having fewer vectors. This time of year always feel like a hinge, as we turn from early to late fall. The leaves are peaking, Halloween is over, Thanksgiving is on the horizon, and we’ve switched back to Standard Time so it gets dark early. With covid, anything could happen and the number of people dying every day is still much too high, but the current trend is downward and I hope we’re pivoting in this, too.