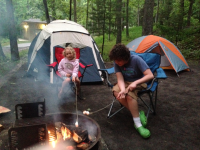 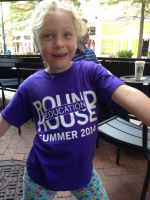 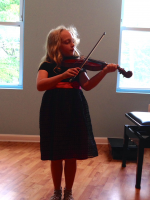 The kids have been out of school for ten days now.  Beth and the kids went camping the first weekend, leaving only about an hour after Noah got home from school.  June got home a little earlier and had a quick play date with Zoë before they hit the road.  Beth and both kids camped in Western Maryland Friday night and then Beth’s mom and brother came to collect Noah for his week with them on Saturday, and Beth and June camped another night before returning home Sunday afternoon.

While Beth and the kids were roasting marshmallows and attending nature programs, I had two days to myself and I made the most of it. I worked in the garden preparing beds and transplanting seedlings.  I sorted through mounds of June’s schoolwork and recycled most of it.  I went out to dinner by myself, read an entire novel, attended a benefit concert for NARAL in a friend’s back yard, and nearly finished working on a (very) short story I’m submitting to the Rehoboth Beach Reads short story contest.

The next week June attended Round House Theatre camp. I’d been thinking her half-day yoga camp would be a good way to ease into summer. I could work in the mornings and she and I could have some quality time in the afternoons in the absence of her brother.  But when the yoga camp was cancelled, I quickly realized I was more willing to have her in a full-day camp than no camp at all so after many frantic emails and phone calls to various camps, she ended up at Round House, which is a tried and true choice for us. We’ve had one or both kids in their summer camps since Noah was six.

Other than Noah’s absence (which is a big “other than” of course, as I missed him a lot) and other than the commuting to and from Silver Spring (Beth did drop-offs and I did pick-ups), it was in some ways a lot like a school week.  Beth and June left a little earlier than June’s school bus and I needed to leave the house a little earlier than she usually gets home so I had a workday of about the same length as usual.

Most days after camp we lingered in Silver Spring for an afternoon snack, on Thursday I voted early, and on Friday, I came to see the end-of-week sharing and then took June to play in the fountain until it was time to meet Beth for pizza and ice cream.  The sharing was cute, as always.  June was one of several Little Red Riding Hoods in a dance version of the story. The wolves carried Hula Hoops representing their bellies and when it came time to eat the Little Red Riding Hoods, they flipped them over their victims’ head so they were inside.  June’s look of comic surprise as she was being eaten was priceless.

One thing that made the week different was that we changed June’s bedtime, effective the first night of summer break.  It’s been 7:45 for a long time, which is earlier than most of her peers go to bed.  Unlike allowances, which go up on a predetermined schedule (on the child’s birthday every other year), bedtimes at our house are more based on what the child seems to need and his or her circumstances. June has always needed more sleep than Noah did at comparable ages, but I’d noticed recently she was having trouble falling asleep at night and I also wondered if she might wake later in the morning if she had a later bedtime. Summer seemed like a good time to experiment, so we bumped her bedtime up to 8:15, which in a pleasing coincidence is also her age.  (She’s eight and a quarter as of today.)

So far, the new bedtime is not having either of the desired effects. She’s still awake long after we put her to bed, not every night, but many nights and she’s not getting up any later.  But it’s possible she needs longer to adjust.  I’m willing to give it the rest of the summer and see how it goes. (I did tell her it might be a summer-only change.)

Meanwhile, going to bed later and not getting up any later has left her over-tired on occasion. On Tuesday while we were on the bus from camp to violin lesson she actually fell asleep and on Friday while we were at Ben and Jerry’s and she dropped her cone on the ground, she burst into tears and kept crying even after Beth said she could have a new one, which is not like her.

On Sunday Beth drove back out to Western Maryland to retrieve Noah. June and I had a pleasant morning at the farmers’ market and the library and then she had a play date with Riana, whose family is about to leave town for two months.  Among other things, they cut the dead (but quite fragrant) parts of the lavender plant in June’s garden and made sachets out of orphan socks and bits of ribbon.  I purchased one in a Little Mermaid sock for thirty cents and put it in my sock drawer.

Shortly after Beth and Noah returned, laden with treats from YaYa, we all headed out for June’s second violin recital. June seemed pretty confident about the recital ahead of time.  In fact, when she showed up at her last lesson before the recital in a shimmery silver cape she’d made at drama camp and her teacher observed mildly that she’d never given a lesson to anyone in a cape before, June pointed her bow at the ceiling and declared herself, “Super Violin Girl.”

When the time came to perform, June didn’t seem to have any of the pre-recital jitters she had last time. She was happy to sit next to Toby, a boy she knows from after-school activities (cooking and drama clubs) while she waited for the recital to begin and she was highly amused that the program called it the “June Recital.”  “My recital,” she mouthed to Noah who was sitting close by in the first row with his video camera. June played third out of nine performers and did a nice job on her three pieces: “Long, Long Ago,” “Happy Birthday,” and “Ode to Joy.”  (Later she admitted to Toby’s mom that she had been nervous but she “tried to look calm.”)

Here’s a two-minute video of her performance if you’d like to see it:

The other performers were six kids who played piano or guitar, an adult vocalist, and a piano teacher who played one of her own jazz compositions.  The vocalist was a big woman with a big voice who sang “All of Me.” June looked rapt during her performance. Later at home, I could hear her singing snippets of the song under her breath. After the recital we went to the Co-op and got the makings of a picnic dinner we ate at one of the tables outside. And so ended the second weekend of summer break.

This week will be more typically summer-like, with both kids home at least part of the day.  June is in a half-day camp at her old preschool and Noah is volunteering there.  He’s doing a mix of clerical work and helping out with the campers. I’m hoping Lesley can keep him busy all week because he needs the Student Service Learning hours.

Although we didn’t do it today, the plan is for them to walk to and from camp by themselves, starting tomorrow. June is very excited about this.  In fact, when she was in her middle year of preschool she made a collage she entitled “Me and Noah going to School Without Mommy.”  Now, four and a half years later she’s living the dream.

Faced with an abbreviated workday, I had to figure out what parts of my non-work routine would stay and what would go. Here were the results. Housework: eliminated.  Exercise: delayed until the kids were home. Reading on the porch with a glass of iced tea: time reduced, but kept.

I am still working on afternoon plans for the kids. Megan came over after camp today. The girls made bird feeders by smearing peanut butter and breakfast cereal on plastic jugs and they had a fashion show, which Noah filmed for them. Wednesday or Thursday we might take a field trip down to the Mall to take in the Folk Life Festival.  Both kids made a start on their summer math packets this afternoon and later in the week I will have them do some yard work, too. It’s not all fun and games around here, but I hope to find a good summer balance for them and for me. Whether you’re a middle-aged mom, a teenager, or eight and a quarter, there’s a time for work and a time for play.