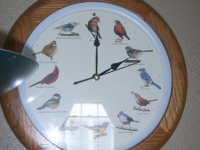 July is here. It’s full summer and the second half of 2008 is upon us. I feel we’re on the cusp of so many things. This month first my father and then my mother will turn sixty-five. (Happy Birthday, Dad! Happy Birthday, Mom!) In August, Noah will start second grade and in September, June will start nursery school. Her class has a weekly summer playgroup so she’s meeting the boys and girls who will be her first real friends, although their interaction now is mainly limited to staring at each other from across the snack table. In November, we’ll elect a new President. June already knows her candidate—“I wuv Bwack Obama Pwesent,” she says. (I can’t argue with her terminology either. It would be a wonderful present.)

There are other things I can’t predict with any accuracy but I hope will happen before the year turns. Sleeping through the night, anyone? June experimented with this maybe a half dozen times this spring, and then she gave it up. Toilet training, maybe? We got some serious pushback on this when we tried a few weeks ago so the Elmo and Zoe underpants and the Abby the fairy stickers got put away. We’ll try again when she seems ready. Meanwhile, I put her dolls on the potty every now and then. She watches with guarded interest.

Speaking of June, she’s more two all the time. We hear “No!” a lot and she’s starting to throw the occasional tantrum, though they’re still pretty mild. I don’t think she’s really peaked yet. What I mind more is the constant refrain of “Gimme that! It’s mine!” (Whatever it is almost never is hers. In fact, once she grabbed the drawstring on Noah’s shorts and shouted, “It’s my string!”) Along with this possessiveness has come an endless stream of bickering with Noah. Up to now they haven’t gotten along pretty peaceably, but I think he’s out of patience with her and he’s laughing at her assertions of ownership less often and arguing with them more often.

Noah doesn’t change as quickly as June does, but I am seeing glimpses of the boy and even the man he’ll be in years to come. He’s missing four teeth right now and one of the top front ones is coming in. I am half curious how the adult teeth will look in his mouth and half afraid he won’t look like my little boy any more. He’s busy with his summer math workbook and is enrolled (at his own insistence) in three different summer reading clubs. We had his reading level tested last week in conjunction with one of them and he’s reading at the fourth-grade level. He’s moved onto a new passion recently– dragons. We have four different books about dragons checked out of the library, a new dragon pillowcase Andrea made and three imaginary pet dragons living in the back yard. As active as his imagination is, it recently took a rather realistic turn. One of Noah’s favorite activities is “story-game.” We tell a story, each taking a turn adding to the narrative. The one we are telling this week walking to and from art camp is about Noah and Sasha, grown up and working together as marine biologists. Noah’s the head of the team studying dolphins; Sasha’s group studies whales. They’ve even published their findings in scientific journals. (Noah invented one called Leaping Creatures of the Sea. Okay, so it’s not completely realistic, but it’s a change from the usual stories about magic and mysteries.)

People often say of parenting that the days go slowly but the years go quickly. It’s true. The hours and days and weeks and months and years add up until that baby you had not long ago is telling you he wants to join the robotics club in high school– the high school Noah will attend has one– and you think maybe he really will. But we live our lives not in years but in the small spaces of minutes and hours.

Here’s how the first day of July went for us, hour by hour.

7:00: June and I were snuggling and drowsing in bed. Beth was in Noah’s room reading his morning story to him.

8:00: Beth, June and I were eating breakfast. Noah was playing computer games.

10:00: We were approaching the library, with just a block or so to go. We’d taken a different route than usual because we’d dropped Noah off at camp and June was agitated the whole walk. “We have to go to the library! We have to sing songs with Ms. Karen!” she kept insisting, not heeding my assurances that we were in fact going to the library. When we reached Maple Ave, she seemed to recognize where we were, relaxed a little and said to me, “Don’t worry, Mommy. We’ll find Ms. Karen.”

11:00: We arrived back at home. I read the online newsletters I clip for Sara while June drew with chalk on the blackboard half of the easel. Occasionally, she would commission me to add something to her scribbles. Suns and rainbows are favorites of hers.

1:00: I rode the exercise bike while June napped.

2:00: I hear birdsong from the dining room. It was our clock, which plays a recording of a different bird for each hour. Two o’ clock is the Northern Mockingbird. I was sorry to hear it. I was lying in bed with June. She’d awoken prematurely from her nap and I’d put her back to sleep in our bed. I was holding her with one arm and holding Hearts in Atlantis (http://en.wikipedia.org/wiki/Hearts_in_Atlantis) in my other hand. The story was engaging and June was warm and snug in the crook of my arm. I could smell the faint odor of sweat on her skin, and the cantaloupe she’d eaten at lunch on her breath. I didn’t want to wake her up and go get Noah at camp, but that’s what I did.

3:00: “This playdate will be better when we get home,” Noah declared.

I’d picked up Noah and Jill from art camp a half hour earlier and brought them to the playground on the way home. Their play got off to a slightly rocky start. As I walked back toward the playground with June in tow (having recently retrieved her from the nearby woods), I heard Jill say, “Stop it right now, Noah, or I’ll tell your mom.”

As I headed apprehensively to the play structure where they were both standing, a woman approached to tell me Noah was blocking a younger boy’s path and not letting him down the slides. When I told him to stop he did, but he ran down to the creek to throw rocks in the water, leaving Jill behind. She told me about a time when he pushed her on the playground at school and she’d told the playground monitor. I wondered uneasily how long Jill’s memory was. Was she recounting something that happened last year, during Noah’s streak of bad behavior or was this recent? I didn’t ask, though, since I had my hands full chasing June around. I made a mental note to ask Noah about it later.

Eventually I got Noah and Jill reunited at the swings, but he was grumpy.

“Do you want to go home now?” I asked, thinking he might be right. A change of venue could help.

We agreed on leaving in five minutes.

4:00: Noah and Jill were in his room laughing and making shadow puppets on the wall.

The play date did improve at home. They ate a snack, took turns playing his guitar, and played with the hotel Noah made for school, which now serves as a dollhouse. They dumped all the pieces of the world map puzzle on the floor and didn’t put any of them together because they got distracted by the microscope. A crucial piece of the microscope fell out and they decided to make shadow puppets. All of these transitions occurred smoothly and without rancor. They ended their playdate with a game of online Monopoly. When Jill’s babysitter came to take her to her piano lesson at 4:25, Jill didn’t want to leave.

5:00: Cyberchase ended and Arthur began. I’d finished my work for Sara, folded laundry and had even snuck in a little more reading while the kids watched the first half hour of Noah’s television. It was tempting to keep reading, but I decided to put my book away and cuddle with them on the couch for the second show instead.

6:00: “This is fun,” Noah said. He and I were in the garden sitting by the lettuce patch. I was picking lettuce for salad and he was weeding. I was running late with dinner since I’d read two chapters of Dragon’s Egg (http://home.earthlink.net/~slthomson/9780061288487.shtml) to him around the time I normally start cooking. I’d intended to just dash out a pick a little lettuce but Noah was showing so much interest in gardening that we lingered. The sun was warm and I could smell the moist earth. June ran around the yard in big loops while Noah and I worked companionably together.

7:00: We ate a later than usual dinner of linguine with veggie meatballs and salad.
There was an unexpected benefit to getting behind schedule. Because Beth got home around 6:20, before I’d even started cooking, she and the kids played in the backyard, taking turns shooting hoops (Beth lifting June up into the air during her turns) while I cooked. No one screamed or cried or whined during the entire time I was preparing dinner.

8:00: Beth and Noah were playing a hand of poker. She’s teaching him various card games and they play every night before bed. On bath nights he sits there with his hair slicked back wearing the sleeveless t-shirts he wears to bed, studying his cards and looking for all the world like a 1940s card shark. He just needs a cigar and a fedora.

9:00: The children were asleep. I was in the kitchen and caught a glimpse of the backyard as the twilight faded to full dark. The air was full of dancing fireflies. I stayed at the window and watched them for at least five minutes.

10:00: Beth and I were in bed, but not yet asleep. Our bedtime conversation (whispered so as not to wake June in her bed in the corner of the room) was over. I rolled over on my side and waited for sleep.