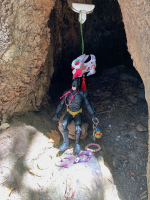 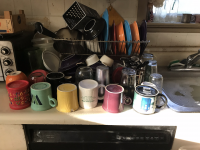 As Beth, Noah, and I walked toward the music school building at the University of Maryland for North’s choir camp concert on Friday afternoon, I said that after Sunday we’d be all finished with this summer’s performances.

“They’re not that bad,” Noah joked and Beth explained her comment had not been about the quality of the performances, which we always enjoy, just the logistics of rehearsals and performances. The past week had been one of the more hectic weeks of the summer with North at chorus camp in the daytime and Sweeney Todd rehearsals and performances at night. (And it happened to be a week when Beth was out of town for a week-long business trip to Las Vegas. She’d only returned the evening before.)

Exactly a week after North was in Wicked at musical theater camp, the kids at the film camp where Noah was a counselor screened their films at Rhizome, a local art space where the camp was held. It’s a clapboard house with a front porch decorated with strings of large colorful beads, a screening room on the first floor, and gallery space upstairs. The house and the neighborhood offered a lot of diverse spaces for filming. In addition to the porch and interior of the house, the kids used a nearby alley and a small plaza in front of an office building and the lobby of the same building.

The camp director was Noah’s media teacher in tenth grade and he’s the faculty sponsor for Blair Network Communications (the school television station) and Silver Lens (the documentary team). Noah was on BNC his junior year and Silver Lens his senior year so he and Mr. M know each other well. For two weeks Noah helped him teach a small group of middle schoolers how to write scripts, film, and edit.

On the third Friday in July, the audience gathered in the screening room. Mr. M and some of the campers spoke about their experiences at camp and then Mr. M showed some of the practice film they shot while working on camera skills. There were two short feature presentations, interconnected films, the first about the persecution of animal-human hybrids (I’m guessing some of these kids saw Sorry to Bother You) and the second about the hybrids’ rebellion. Each film was about eight minutes long. In addition to his behind the scenes roles, Noah played two goat hybrids, a lawyer, and a pro-hybrid human protester. The films were a lot of fun and afterward Mr. M was effusive in his praise of Noah. One of the campers chimed in that he’d been “invaluable.”

Both kids were home the following week. Whenever there’s a week like this in the summer, we call it Camp Mommy.  North went to the U.S. Botanical Gardens with their Highwood friend Lyn and we made soft blackberry cookies for a family friend who was in the hospital. (They were kind of like scones, but crumblier.) The kids and I took walks together most mornings before it got too hot. They did house and yard work and North helped with dinner most nights and thought to bring in the laundry one afternoon while I was on a conference call and it started to thunder. Noah started deep cleaning his room and stripping it of knickknacks he no longer wanted (a lot of which were actually North’s, abandoned two years ago when they got their own room).

We took most of the castoffs to the fairy tree near the playground. Wait, your neighborhood doesn’t have a fairy tree? It’s a tree that’s hollow at the bottom where people leave toys and decorative items and then other people take them home. I am a habitual contributor as the house is still full of the kids’ old toys and this is more fun than taking them to the thrift store. One day when we went to drop off seven child-sized bracelets, we found someone turned the collection of items there into an art installation. A large Batman doll was seated on a brick, with a rubber duck keyring dangling from his wrist and a Chinese rabbit we’d left there earlier suspended over his head. I put one of the bracelets around his neck and scattered the rest on the ground around him.

Tech rehearsals for Sweeney Todd started that week so it was nice North didn’t have any place to be in the morning after late nights at the theater. And right before Beth left for Las Vegas we developed a cascade of interconnected plumbing problems that lead to multiple visits from plumbers and a contractor, the removal of our dishwasher, and water damage to a basement wall. So, that week and the next I spent a lot of time coordinating with workers and washing dishes by hand. Noah said I was “partying like it’s 1899.”

This was North’s most transportation-challenging week of the summer. Sweeney Todd opened that Friday and I had to figure out how to get North home from the theater late at night with Beth out of town. I ended up finding rides for every night, so I didn’t need to take a Lyft out there to pick them up. Thanks, Lane! Thanks, Yulia! Starting Monday, North was in choir camp in College Park in the daytime. They had to miss the first day (Sunday) because they had a Sweeney Todd matinee, so I went up there to collect their music and find out what electives they had (songwriting, theater, and ukulele). Getting to College Park is a little trickier than North’s other day camp, which is in Takoma Park, but after Noah and I helped them navigate the trip there and back on Monday (it involves switching buses at a transit center) they were able to get themselves to camp and back on Tuesday.

To make matters more complicated, Monday and Tuesday were days off at the theater, but Wednesday there was a brush-up rehearsal and a show on Thursday night so they had to go straight from camp to Silver Spring, grab some dinner there and then go to the theater. Wednesday I picked them up at camp and accompanied them to Silver Spring and took them out for pizza and bubble tea before rehearsal started. Thursday they made the same trip alone (and even figured out a better two-bus route than the bus-train-train one I’d used the day before). This was good because it meant I could be home for the contractor, who at 7:56 a.m. had changed his arrival time from 8 a.m. to 5 p.m.

Beth got home that evening, after seven and a half days away, and we were all very happy to see her. She ate dinner and crashed, napping until it was time to go get North at the theater. The next day she worked from home and we all set out for the concert a little after one p.m. This was our eighth year of going to band, orchestra, and chorus concerts at the University of Maryland so we knew what to expect. The fifth to seventh grade orchestra played first, followed by the eighth to tenth grade orchestra. (Orchestra and chorus camps take place the same week; band camp is the week previous). The chorus performed last.

Their first song, North’s favorite, was “Seize the Day” from Newsies. (It should surprise no one their favorite piece was from a musical.) The junior counselors who were accompanying the chorus on various instruments all wore newsboy caps, which was a nice touch. Next was a pretty sixteenth-century Italian song, then a traditional camp meeting song, “No Time,” (which North sang one year in Honors Chorus) and a traditional South African song with an accompanying dance. This was possible because rather than standing on risers, the singers were on wide platforms built into the stage, so there was room to move around and stomp. North managed the forward, backward, and side to side steps on crutches and even stamped lightly. The last song was Harry Belafonte’s “Turn the World Around” with steel drums to give it a Caribbean sound. It was an uplifting tune and I found myself thinking of the Democratic debates I’d stayed up late to watch earlier in the week, allowing myself to feel a little bit hopeful and wondering which candidate can turn the country around. It sorely needs it.

After the concert we went out for ice cream at the University’s ice cream parlor, then later that evening out for pizza. On the way home we saw a rainbow. I wondered if it was a good omen.

We’re going to see the closing performance of Sweeney Todd tomorrow. Then the kids have another week at home together before North heads off to sleep-away camp. I think the second session of Camp Mommy will feature a creek walk, a trip to Langley Park for a pupusa lunch, and the filming of a music video. I may also take North and Lyn to a movie and to splash in the fountain in Silver Spring.  It’s not looking like I’ll have much work for either Sara or Mike, and honestly, this week I don’t mind. Noah has only two and a half weeks of summer break left and North has four. I want to seize every day.