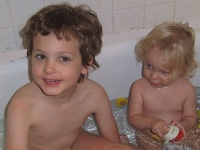 Beth and Noah were reading this poem, alternating lines, with breaks for him to recover from helpless, hysterical laughter:

“One Winter Night in August”
By X.J. Kennedy

One winter night in August
While the larks sang in their eggs,
A barefoot boy with shoes on
Stood kneeling on his legs.

At ninety miles an hour
He slowly strolled to town
And parked atop a tower
That had just fallen down.

He asked a kind old policeman
Who bit small boys in half
“Officer, have you seen my pet
Invisible Giraffe?”

“Why sure I haven’t seen him.”
The cop smiled with a sneer
“He was just here tomorrow
And he rushed right back next year…”

The poem goes on, but this is where Noah really lost it. He loves nonsense. Alice and Wonderland and Through the Looking Glass are among his favorite books and we have read them both countless times. I keep meaning to get The Phantom Tollbooth for him from the library, but we haven’t read it yet. What cracks him up most about this poem are the contradictory references to time, the winter night in August, actions described in the past tense which are said to take place in the future. “Next year is in the future,” he insisted, giggling.

As silly as the poem is, it does hint at an essential truth. The past, present and future are hopelessly entangled with each other in all of our lives. We are who we are now because of our pasts, and we try to imagine or make sense of the future, based on both the past and the present.

I was tagged recently, which means another blogger, Not the Mama, (http://notthemama.wordpress.com/) nominated me to write a blog containing “seven random or weird” facts about myself. I wanted to do it, but struggled with what to write. Surely, there are an ample number of weird facts about me, or at least facts that put me outside the mainstream of American society. Seven would be a conservative figure. Here are some I could have used for starters: I’m a bisexual, a vegetarian, and an atheist. I don’t have a driver’s license and I haven’t had a hair cut in twenty-five years. I have a PhD, and I know more about vampires than a normal person should. Somehow, though, none of this inspired me. It didn’t hang together; I didn’t know how to make sense of it. And yes, I know that’s what “random” means and randomness certainly has its place in life, but when possible I like things to have a narrative. So instead of isolated facts, I decided to give a brief account of what was going on in my life thirty-five, thirty, twenty-five, twenty, fifteen, ten and five years ago. The arbitrariness of the dates should impart a certain level of randomness while keeping the narrative arc going. Here goes:

1) November 1972: I was five and a half and living in Brooklyn with my mother, father, and nineteen-month old sister, and attending kindergarten at a Montessori school. The following month we would move to Philadelphia, when my father left his job at The Wall Street Journal to take a job as an editor at The Philadelphia Inquirer.

2) November 1977: I was ten and a half and living in Newtown, Pennsylvania with my mother, father and sister. My parents had decided to move out of the city and to a small town within commuting distance, partly in hopes of getting a fresh start on their struggling marriage, not that I knew that at the time. They would separate the following March. I liked the small town atmosphere, being able to ride my bike anywhere I wanted and I had a close-knit group of three best friends. I think I was pretty happy.

3) November 1982: I was fifteen and a half and living in Bala Cynwyd, Pennsylvania with my mother and sister. We’d moved there after the divorce to be closer to my mother’s work and school two years earlier. Since the move, she had finished a Master’s degree in nursing at the University of Pennsylvania, was working as a psychiatric nurse and she’d just begun dating the man who would become my stepfather. The previous spring I had fallen in love with my best friend and I was coming to terms with the fact that I was either lesbian or bisexual. The friend had suddenly and mysteriously dropped me at the end of the summer. She said she would explain later and I waited, heartbroken and confused, for months for that explanation, but she never supplied it. I suspect she’d realized the nature of my feelings for her. I spent most of that fall completely miserable, mooning over her, sure I would never find anyone who would ever love me.

4) November 1987: I was twenty and a half, spending a semester in Córdoba, Spain. The summer before I’d had my first lesbian kiss, which quickly led to my first lesbian relationship. (With a young woman named Beth. I’ve mentioned her before, right?) Despite this, I was engaging in an ill-advised flirtation with a Spaniard. (See my July 22 entry for details if you want them.) I wish I’d had more sense, but I was young and foolish.

5) November 1992: I was twenty-five and a half, living in Washington, DC with Beth and a friend of ours from college, Kris. It was ten months after our commitment ceremony. I was working as a grant-writer for Project Vote (http://www.projectvote.org/), a non-profit organization that registers low-income African-Americans to vote. The organization is non-partisan, but I wasn’t, so I was pretty euphoric about the election of Bill Clinton. Beth was working at HRC (www.hrc.org/) and we’d both been putting in long hours in the months leading up to the election, so we took a vacation and went to visit my sister in Santa Cruz. We rented a convertible and drove to Big Sur. We traveled a lot, pre-kids, but this stands out in my mind as a particularly happy, carefree trip.

6) November 1997: I was thirty and a half, and still living in Washington, DC, with Beth and Kris. (Beth and I lived in that apartment eleven years, eight of them with Kris. It’s the longest I have ever lived anywhere.) I was four years into my PhD program at the University of Maryland, with two to go. My financial aid had run out so I was teaching as a part-time adjunct at George Washington University. It was my first semester there and I was delighted with the students who were both more serious-minded and more fun than any I’d taught at either The University of Iowa or Maryland. Teaching was a fulfilling and welcome diversion from the morass that was my dissertation.

7) November 2002: I was thirty-five and a half, living in Takoma Park, Maryland with Beth and Noah, who was eighteen months old. We’d bought our house six months earlier and I was in my second year of full-time teaching at GW. I was teaching a class on genre fiction for the first time that semester. I’d designed it to complement the horror class I’d been teaching for a few years and I was really enjoying it. Noah was in daycare for the first time that fall and it was a hard adjustment for all of us. (Beth had been working part-time to care for him while I was teaching before this.) After a couple months, with the help of a warm and loving teacher, he got used to daycare and was happy there. He stayed at that center for three years, until I lost my job.

That takes us up to now. If you’ve been reading this space, you know all about that, and as for five years from now, as Noah says, that’s in the future. I do know I’ll have a first-grader (again!) and (even more shocking) a middle-schooler. Having both kids in school will no doubt change my life in ways I can’t even imagine now. The future is unseeable, but here nonetheless, like an Invisible Giraffe. I can reach for her, feel her outlines, but I can’t quite make her out.

Note: Now I’m supposed to tag seven more people. I don’t think I can. I read a lot of blogs, but not too many on a regular basis. Since Not the Mama only tagged four, I will finish up her seven by tagging three, one each who remind me of my past, present and future.

The Ghost of Bloggers Past: Kath (http://www.momsworld.com/portal.php?blog=2). This blog is defunct, so the point of tagging it is not to get the author to participate, but just to direct new readers to her blog archive, which is still available online. In the late 90s and early 00s, Kath wrote an online parenting column with message board attached (it was a blog before the word existed really) on the Moms Online Forum she founded. It was called the Daily Alexander. After the birth of her second child she renamed it Life in Progress and after a long hiatus it was reinvented as the Mom in Progress blog, where the link above will take you. I have been reading about Kath’s family since her oldest was a toddler (she has four kids now). Her writing is touching and down to earth and it was the inspiration for my own blog. So even though she’s not writing now, I can’t help paying tribute to her.

The Ghost of Bloggers Present: Chris (http://www.silverspringvoice.com/apparently/). Chris lives here in Takoma Park. We met when our older kids were in a drama class together last winter and spring. He’s a stay-at-home dad with kids close in age to mine (his oldest is a year older than Noah and his youngest is a year and a half older than June) so we go through a lot of the same things. He’s a cool guy. I recommend his recent post on giving thanks. Most of the time the comment function on his blog doesn’t work so if you visit and try to comment it might not show up.

The Ghost of Bloggers Future: Liza (http://lizawashere.com/). Liza is the founder and administrator of Lesbianfamily.org. I have only begun to explore this website but I hope to find some good reading material and community there. Liza has a son about June’s age who is named Noah. This tickles me.

Rules
1. Link to the person that tagged you and post the rules on your blog.
2. Share 7 random and or weird things about yourself.
3. Tag 7 random people at the end of your post and include links to their blogs.
4. Let each person know that they have been tagged by leaving a comment on their blog.