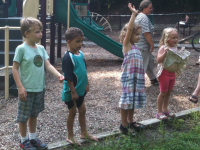 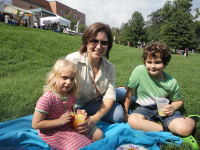 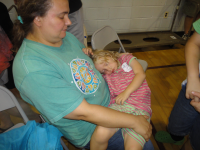 ‘Tis the gift to be simple, ’tis the gift to be free
‘Tis the gift to come down where we ought to be,
And when we find ourselves in the place just right,
‘Twill be in the valley of love and delight.
When true simplicity is gain’d,
To bow and to bend we shan’t be asham’d,
To turn, turn will be our delight,
Till by turning, turning we come ’round right

It took me a couple weeks of emailing people to find a new date for June’s rain-delayed back-to-school party that worked for almost everyone we had invited, but eventually we settled on Saturday afternoon. It was not clear that the weather was going to co-operate, however. The party that had been postponed by Hurricane Irene was now being threatened by the torrential rain associated with Tropical Storm Lee. All week it rained (a small section of our basement flooded on Thursday and I spent much of the day mopping up water and laundering towels) but then early Friday afternoon the sun broke through the clouds. Sunlight can be so startling and invigorating when you see it for the first time in several days. I remember that from my college days in Northern Ohio. I took Noah out on the porch to read Harry Potter and the Half-Blood Prince after school and as I read I enjoyed the sun that fell on my forearm and one bare foot.

There was a chance of showers on Saturday, but the morning was sunny and as it progressed, it seemed less and less compelling to try to clean the house to party standards, which was a good thing because there was almost no chance of me actually achieving that if we had to move the event from the playground to the house. I would have moved it to the messy house if I’d needed to, though. We weren’t canceling again.

As we walked to the playground, twice I thought I felt a drop of rain. I did not mention it to anyone. It seemed like bad luck. As we draped the tablecloth over the table and set out the cake, juice, plates, forks and cups, I noticed part of the sky clouding over. We were finished well before party time and sat, waiting, watching the sky and the paths to the playground for approaching guests, hoping the guests would come before the rain.

Everyone who RSVPed came, and it didn’t rain. That’s really all I need to say to let you know the party was a success. All through the preparations I had visions of the sky opening up and onto the cake and the lyrics to “MacArthur Park” ran relentlessly through my head. But they came. First Malachi and his mother, then Maggie (formerly known as the White-Tailed Deer) and her mother, and then Dominik (formerly known as the Field Cricket) and his mother and toddler sister—they all came. The kids played in the creek and on the playground equipment and ate cake and drank juice and played some more. Maggie’s mom led the kids in a couple rounds of “Mother May I?”

The grownups talked, about kindergarten of course, but also about our older kids. The mom with a third-grader wanted to ask me about the application procedure for the Highly Gifted Center, and both of us with fifth-graders talked to the middle school teacher about middle school options. It was hot and humid, but it was good to be out in the sun anyway and it was good to be seeing friends whose kids we’ve known since they were babies or two or three years old as we celebrate their entry into elementary school. Noah went home on his own shortly after the cake (he’d been moody all afternoon) but Beth and June stayed at the playground to play after the party was over and the guests had all gone home.

Sunday was the Takoma Park Folk Festival, a long-standing annual affair held on the second Sunday of September inside and on the playing fields of a local middle school. It was also the tenth anniversary of September 11, so the theme of the festival was “Peace and Reconciliation.”

We arrived around 11:15 and decided to buy lunch and take it to the stage where our chosen twelve o’ clock band was playing. We knew it would take a long while to assess our culinary options, stand in line and purchase food. The two orders of falafel and veggies, one order of lo mein with eggroll, one plate of freshly cooked potato chips, one lemonade, two limeades and a mango smoothie was more than we could carry in one trip, too, so we had to ferry the food to the field in shifts. Finally we were settled on our blanket listening to the eleven o’ clock band finish up. Noah was listening more carefully than I was, but from what he reported it sounded like they might be 9/11 conspiracy theorists. I decided to relax and enjoy the beautiful weather and the delicious food, rather than try to make out the lyrics.

Soon I saw Lesley walking toward us. During the second half of the food run, Beth had dropped by the Purple School table to visit a friend who had a lunchtime shift, found Lesley there and directed her to our blanket. Lesley was full of hugs for everyone and questions about the first two weeks of school for both kids. Noah was chatty but June was a bit cool toward her (she was just the same way with Andrea when the Bugs class ended—I think she needs to detach in order to make transitions) but Lesley finally coaxed a little smile and a thumbs-up from June when she persisted with questions about school.

The noon hour band was Dirty River (http://www.dirtyriver.com/) a bluegrass band Noah had chosen. We were staying for three hours (Noah had a 3:30 play date with the twin brothers who seem to be his best friends at his new school) so the kids got to pick one hour’s entertainment each and Beth and I picked jointly picked the last one. Noah liked the band and asked if he could buy their CD. Beth and I pooled the money we had left after our frozen custard/Italian ice dessert and managed to scrape up the required funds. He took the money and went to buy the CD by himself, walking with the slight swagger he has whenever he’s feeling especially grown-up. But halfway through the set, he said he wished he hadn’t bought the CD because he didn’t like the band that much after all. He’d been the same way the day before, alternately complaining about being bored at June’s party and seeming happy and engaged, joining in their games and rough-housing with Malachi. He’s been like this more and more lately. Is it a tween thing?

Next up was the “Family Dance.” This was June’s pick and I must admit I was somewhat horrified at the idea of public dancing but kids push you out of your comfort zone all the time. This session was inside the school, in a gym. Beth and Noah settled into the bleachers to watch while June and I hit the dance floor. Once I realized this was going to be the kind of dancing with specific instructions and not free form, I was much more comfortable. It actually ended up being kind of fun. There were line dances and circle dances. June liked the “Highland Gates” dance in which some people stand in a circle and hold their hands up high so people inside can “run in and out the windows.” I glanced up more than once and saw Noah clapping to the tune of “The Rattlin’ Bog,” that old summer camp favorite (http://www.youtube.com/watch?v=xnv9GB8xvrw&feature=related). June was worn out before the hour was up so we went to sit with Beth and Noah and watch for a while. That was how we got to see the spiral of people curl and uncurl to the tune of “Simple Gifts.” It was like watching a living knot come untied, a very cool effect, and achieved with so few commands from the leader it was like a visual demonstration of the beauty of simplicity.

Our last session was Magpie (http://www.magpiemusic.com/biography.htm). Back in college, Beth and I used to listen to a Magpie cassette of songs about work and labor activism. We both thought it would be fun to see them in person. The kids were somewhat less enthusiastic about being in a room full of earnest, graying Takoma Park residents listening to earnest, graying musicians. Noah kept leaning over to check my watch. June was antsy until she fell asleep on my lap. She’s been doing pretty well going without her nap the past couple weeks, but she does occasionally crash on weekend afternoons. I enjoyed the set, though I came out of it realizing I am more cynical about politics and human nature than I was when I was twenty.

When Magpie finished, I woke June as gently as I could and carried her out of the school and we all got in the car to drive Noah to the twins’ house. Beth and I had busy late afternoons and evenings planned. She had to finish grocery shopping and cook dinner and clean the kitchen and the bathroom. I had six chapters of a book on copywriting to read in preparation for an assignment this week. I was pleased with our weekend, though, and with the simple gifts of a sunny afternoon in the park with old friends embarking on a new adventure, a surprise visit from a beloved teacher, music and dance and family time.

I don’t know what the ultimate lesson of September 11 was, but if it had anything to do with appreciating the simple things you have and holding close to those you cherish, it was a good way to commemorate the day.