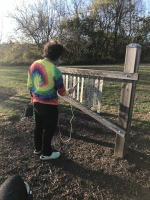 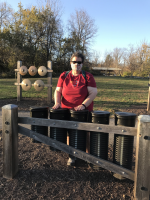 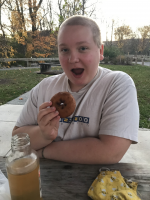 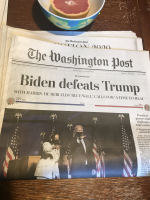 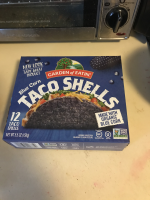 Well, that was a wild ride, wasn’t it? I mean a four-day wait to find out who won the Election shouldn’t seem that long when I lived through five tense, stressful, and eventually heartbreaking weeks to see who won the 2000 election. But that was twenty years ago and while the stakes in the Bush/Gore contest seemed high at the time, we had no idea how high they could get.  It’s satisfying that the baby I was pregnant with back then just voted in his first Presidential election and that it was such a momentous one.

I had to think hard about what to serve for dinner on Election night. In 2016, we had tacos—because of the memes about taco trucks on every corner if Clinton won—and I have not eaten a taco since then, much to North’s distress because they really like tacos. (I did consent to make them on their birthday every year since, though I always ate something else.) North advised me not to make anything anyone particularly liked. Then I was listening to a podcast about the history of voting in the U.S. and I learned that George Washington, when he was running for local office in Virginia, used to throw big parties to sway his neighbors to vote for him. This was in the days of voice voting, so he’d know how his guests had voted after he fed them. Anyway, one of his favorite things to serve was barbequed beef and corn pudding. Now I do like barbequed seitan, but I thought since it was a food choice that wasn’t inspired by this particular election, if Biden lost, I wouldn’t have such a strong negative association so I chanced it. And corn pudding is not in my regular rotation, so there was no real risk there.

Dessert was more obvious. Tuesday was Noah’s half-birthday and we always have cupcakes on the kids’ half-birthdays. This year we had a selection of red velvet and cookies and cream cupcakes from the grocery store. We ate them separately because we ended up splitting into two groups on Election night. North and Beth chose not to watch the returns come in and watched The Fosters instead in hopes that it would be less anxiety-inducing. Noah and I watched MSNBC. He started while I was still doing the dishes and when I came into the living room at 7:20, two states had been called: Indiana for Trump and Vermont for Biden. I won’t go through the blow-by-blow because either you watched it or you didn’t, but either way, you know how it went. By eleven (an hour past my normal bedtime), it was clear it wasn’t going to be decided any time soon and probably not that night, so I went to bed, jittery but holding on to hope. Noah stayed up until 12:30. I woke up around the time Noah was going to bed and checked the count on my phone, but when I woke again at four, I resisted the urge. It was better than four years ago when I was waking up every hour, checking my phone and being sick in the bathroom.

In the morning I heard Beth telling North it wasn’t decided yet but she thought Trump might win a second term. I listened, considering the fact that because of her work, Beth knows on a more granular level than I do what the returns in various places mean, but also considering the fact that Beth has a tendency to catastrophize and trying to weigh these two facts about my wife.

Then something completely unexpected and unrelated to the election happened on Wednesday. North spontaneously regained the ability to urinate normally, after two months of only going through a catheter. We have no idea why it happened, but as North said, it was “a good thing about today.” It’s been five days now and so far, so good. We’re all very happy about this.

And then the days dragged on. We went to bed without knowing the outcome again on Wednesday and then again on Thursday. But as time passed, it began to look better and better. When Biden pulled ahead in Pennsylvania on Friday morning, Beth texted me “Ice Cream Time!!!!!!” This was because we’d saved the emergency/celebratory ice cream until we had an answer and she intended to eat some whatever time of day that happened. North had gone to the bathroom during their Japanese class and walked by our bedroom (where Beth works) and Beth called out to them that Biden had won.

North, still wearing their headset and carrying their laptop, came into the living room (where I work), crying and almost unable to speak, but when they did, they said, “He did it! He won!” This time I was the cautious one, saying the chances were very good but it wasn’t for sure yet.  Beth was on the phone a long time but eventually came down to the basement to fetch the ice cream from the chest freezer. I was on the exercise bike down there and we had a long hug.

We thought it might be called later that morning, but it wasn’t. North finished their Japanese class, and attended History and Biology, while Noah attended Computer Science, Ethnomathematics, and Philosophy and did some work for ICTV, and Beth and I worked and still nothing. North had a tempting one-day-only star offer on their Starbucks app and talked Beth into a Starbucks run. Noah was still in class, so he didn’t come, but we picked up an iced tea lemonade and a cake pop for him.  We got takeout pizza for dinner and watched the first half of Emma, after which Noah and I read a chapter and a half of Quichotte. We were close to finishing the book at ten, but I was exhausted and went to bed.

The next morning, while Beth was off for a long walk in Wheaton Regional Park (which has become a Saturday morning habit for her in recent weeks) and Noah and I were watching The Handmaid’s Tale, she texted me again, no words, just her bitmoji blowing a noisemaker, surrounded by confetti. I knew what it meant. The race had been called for Biden.

That afternoon, we went on a family outing. We went to Catoctin Creek Park in Frederick County, which is further from home than we usually go, but it had a couple things to recommend it. There was a paved loop trail, which was convenient because North’s been having more pain the past several days and wanted to use the wheelchair. And it’s near Catoctin Mountain Orchard, which has a farm market with a lot of baked goods. (We visited it once before, on our way home from a Unitarian retreat in Catoctin Mountain Park last fall.)

As we drove, we counted Biden/Harris signs and Trump/Pence signs. Frederick County is more purple than our home county, Montgomery. (It went 55% for Biden, versus 83%.) Eventually we lost track, as we passed back over some of the same roads, but I think it was pretty even. My main observation was that the Biden signs were somewhat more numerous, but tended to be smaller (and Beth added, not in all caps).

We’d gotten a later start than we intended so we could only spend about forty minutes in the park if we wanted to get to the market before it closed, but that was long enough for Noah to fly his drone, for Beth and me to amble down to a peaceful stretch of the creek surrounded by boulders covered with lichen and trees with yellow leaves glowing in the sunlight, and for everyone to draw joyful noise from the percussion instruments along the trail.

At the farm store we got three pies to freeze for Thanksgiving (pumpkin, pecan, and apple), and some treats to eat over the next few days (apple cider doughnuts, apple dumplings, apple caramel bread, and popcorn). We found a picnic table near a covered bridge and drank cider and ate doughnuts. Even though we’ve been exploring parks in the Maryland suburbs and exurbs ever since Noah got his drone, at first weekly, now more like once a month or so, this outing felt different, suffused with deep relief and joy.

We got home around seven, so dinner was on the late side, but no one was starving after those doughnuts. Noah and I made sauteed gnocchi with Brussels sprouts and brown butter. I think it was really good, but who knows? Anything might have tasted good that day. We’d hoped to finish Emma before watching Vice President Elect Kamala Harris and President Elect Joe Biden give their acceptance speeches, but there wasn’t time, and no one really minded. I don’t need to describe the speeches. You watched, right? You saw Harris looking radiantly happy in her white suit, telling people “While I may be the first woman in this office, I won’t be the last,” and you heard Biden sounding coherent and rational and compassionate.

After the speeches, we watched the sky over Wilmington, Delaware light up in red, white, and blue stars. The country is still in the midst of a pandemic that’s killed 237,618 Americans, economic uncertainty, and what I hope will be a true reckoning with systemic racism. There’s a lot of hard work ahead, and I do still have my worries and sorrows for my country, but at least right now, every now and then I feel as lit up as that sky. I hope you do, too.

Also, tomorrow we’re having tacos for dinner, with blue shells.