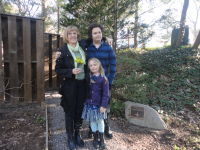 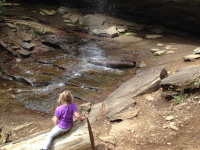 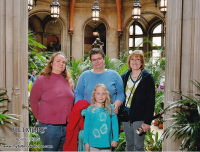 We just got back from a very fun spring break road trip. We spent the first leg with Beth’s mom in Asheville, North Carolina, where she lives part of the year now.

Five hours into our drive, around three in the afternoon and near Roanoke, Virginia, Beth said, “It’s greener here.” It was. There was light green, gold, and dark pink fuzz on the branches, all of which were bare at home. I thought once we reached Asheville the altitude might cancel out the effect of a day’s drive southwest but it didn’t. Lawns were green, flowering trees were blossoming, and daffodils were in bloom, with some already finished. Over the course of nine and a half hours and four states (Maryland, Virginia, Tennessee, and North Carolina), we’d driven into spring.

The drive would have been about twenty minutes shorter but we went to a different street by the same name (Way instead of Court), which as it turns out is a very similar looking cul-de-sac in an entirely different neighborhood. The residents of the house drove up as we were standing on their porch and an elderly man said, “Can I help you?” which I think is Southern for “What the hell are you doing on my porch?” Eventually we found the right house, where Beth’s mom, Ron, and a homemade spinach lasagna awaited us. It was warm enough that evening to eat ice cream on the screened porch.

Saturday we explored the city. We took a trolley tour through its beautiful Victorian neighborhoods, downtown area, and arts district. We learned a lot about Asheville and its famous residents, particularly the Vanderbilts and Thomas Wolfe.

After that we had lunch at a vegetarian restaurant, with a lot of plants, a sheet of glass with water coursing down it and skylights. I got barbequed tofu with cole slaw—all the barbeque joints the tour leader pointed out put me in the mood—and a spicy carrot-apple-ginger drink. I was glad to have something zippy because I was stuffy from a cold the four of us had been passing back and forth for weeks. (It was my second time around with it.)

From the restaurant we proceeded to the establishment that most intrigued Beth on the trolley tour—The French Broad Chocolate Lounge. Noah was hoping for couches made of chocolate, but instead there was an extensive selection of chocolate in solid and liquid forms and a line out the door. There was an employee—a chocolate bouncer if you will—monitoring the line and admitting people in groups. There were tiny chocolate-mole truffles to sample in line. Once inside we ordered drinking chocolate (I recommend the dark chocolate liquid truffle) and various other treats.

Next we moved on to a festival in a nearby park. June spent most of her time climbing up and sliding down inflatable structures. There was also a kids’ karaoke booth that inspired Noah to say, “I don’t know why anyone would ever want to do that,” but June studied the songbook and was seriously considering it before losing her nerve and deciding against it. Many kids performed songs from Frozen, but oddly one chose “Piano Man,” and sang it as if she’d never heard it before, which might have been exactly what was happening. June got her picture taken with the Easter Bunny and we went home, where we dyed Easter eggs and I had a short but deep nap.

We’d had such a big and late lunch no one but the kids even wanted dinner so they had leftover lasagna. Noah finished a take-home geometry test and then he and I read a Douglass Adams short story, “Young Zaphod Plays it Safe,” that comes between books four and five in the Hitchhiker’s Guide to the Galaxy series.

Easter morning after the kids found their baskets, we had a cinnamon roll-French toast casserole Ron made and then we went to church. YaYa had asked me to bring some half-opened cut daffodils from our yard for the flower ceremony, which is a Unitarian tradition. Members of the congregation bring flowers to make an eclectic communal bouquet and then at the end everyone takes different flowers home. There was a lot of music at the service and people lit candles to symbolize their joys, concerns, and sorrows. The children had an Easter egg hunt during the sermon. As we left we collected flowers, leaving with more daffodils, a tulip, a sprig of grape hyacinth, and a yellow, spiky flower I couldn’t identify.

After church we went shopping for provisions and then had a picnic and a hike to a waterfall in Pisgah National Forest. It was a pretty walk, but the trees were a bit more bare than in downtown Asheville. The fall wasn’t a steady stream of water, more like a heavy rain falling from a high rock into a creek. The kids and I went behind the water where we climbed rocks, observed the multi-colored cliff wall, and got good and muddy.

On the way out of the forest we stopped to see Sliding Rock, a natural waterslide Beth and I slid down during road trip through the Southeast we took in our mid-twenties. When YaYa and the kids saw it, the older and younger generations had a similar reaction, “You went down that?” We used to be interesting, apparently. June said she wanted to try it some day, until she learned the pool where you land is eight feet deep.

We came home and June had a bath in YaYa’s whirlpool before we went out to dinner at a Jamaican restaurant. I had jerk tofu with grilled pineapple and vegetables. Asheville is known as a foodie town for good reason.

Monday we visited the Biltmore, a mansion belonging to the Vanderbilts and the largest private residence in the U.S. It did make Hillwood, a D.C. mansion June and I toured two weeks previous, look downright modest, though as far as I know, the Vanderbilts had no Fabergé eggs. What they did have was a 250-room Gothic style house with 99 bedrooms, lovely mountain views, a swimming pool, and a bowling alley on 125,000 acres of woods and farmland. There weren’t as many formal gardens as I expected but we did see a very nice area planted with tulips.

We had lunch in a restaurant located in the converted stables and visited a few of the numberless gift shops on the property before going back YaYa’s house. Noah, who had been feeling under the weather, had stayed home. We collected him and Ron and headed out for an early pizza dinner, stopping at Barnes and Noble to look for my book club’s next book (Jorge Luis Borges’ Ficciones). They didn’t have it, but June found a graphic novel her friends had recommended and spent most of dinner reading it. (By breakfast the next day she’d finished it and she risked carsickness re-reading it much of the next day.)

Beth had a work crisis that evening and had to work a little, but afterwards she and I went back to the chocolate lounge, which I think is her new favorite place. We bought chocolate bars and toffee for later and more liquid truffles (I tried the milk chocolate one this time, also very good). Then we came home and ate the cake Ron had made earlier in the day. It was triple layer Italian cream cake with jelly beans and chocolate shavings on the frosting.

Tuesday morning we packed to leave. June gave a farewell violin concert under the tree in the front yard she’d climbed many times and we said our fond goodbyes and hit the road by 9:15 en route for the beach.