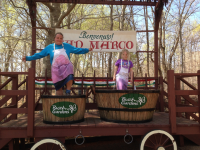 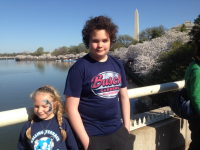 We arrived in Williamsburg on Friday evening after an afternoon of driving in and out of rain. Beth had found us a suite, which meant we weren’t all crowded into the same hotel room, quite the luxury. There was a living room area between the kids and us, so we stood a chance of sleeping past six. We even had a king bed.

There was a kitchen, too, but no time to cook. It took a long time to check in and we wanted somewhere quick to eat so we were happy to find a Noodles & Company nearby. This is one of the kids’ favorite chains and it’s somewhere they’d both get vegetables and protein. We’d opted to visit Busch Gardens on Saturday instead of Friday because of the weather and sure enough we could see the rain coursing down the windows as we ate, but we were lucky to get out of and back into the car during breaks in the storm. We went back to the hotel and everyone went to bed. The kids did let us sleep until around seven. There was a breakfast bar downstairs, so we ate and headed for the park.

If you’re not from the East Coast, Busch Gardens may require a little explanation. It takes the theme in theme park seriously and the theme is Western Europe—specifically the British Isles, Italy, France, and Germany. (There’s also an area devoted to New France, or French Canada. Beth guesses they needed somewhere to put the frontier-themed rides all amusement parks seem to have.) The park is quite pretty. It’s no Cedar Point, of course, as it lacks Lake Erie, but it does have a lot of trees and flowers. Daffodils and tulips were everywhere. And the admirable adherence to the theme means there’s a lot of hokey scenery. Classical architecture and statues in Italy, big beer barrels marked Oktoberfest in Germany. You get the picture. We took a lot of cheesy photos, especially in Italy because my sister has spent of a lot of time there (in the real Italy) and I thought she might get a kick out of it. I liked the little touches—graffiti in Latin on the walls near the food court, fake ironwork on the bathroom stalls in Germany, etc.

No one but June had a strong opinion about what to do first, so after we entered the park, in England, which was strung end to end in Union Jacks, we headed for Germany and the Curse of the DarKastle ride, pausing only to get a dolphin painted on her face. The artist used a stencil and spray paint, which I’d never seen before. I thought $10 was a bit steep for face paint but it really lasted. It was still there three days later when June finally asked me to scrub it off because it was a little smudgy.

When we got to the castle it wasn’t open yet, so after admiring the icicles that hung from it and other details, the kids and I went and rode the swings twice and then it was open. The DarKastle, as you might guess, is Busch Gardens’ version of a haunted house. You wear 3D glasses and the effects are all computer-generated. Call me old-fashioned but I prefer a haunted house with actors or material props and scenery. June, however loved it and wanted to go right back on as soon as we got off, so I took her on again while Beth and Noah waited for us.

Next, after a long line that wound through what looked like a stone passageway in an Irish castle, we rode Europe in the Air, a flight simulator, with views of various icons of Western Europe (Stonehenge, the Coliseum, etc). It’s similar to an IMAX film, except the seats tilt and shake as if you were flying. It made both Beth and me a little ill.

We had lunch in shifts, Beth and Noah and I had crepes in France before Europe in the Air, and then June and Noah had pasta in Italy after it (yes, he did have lunch twice) while Beth and I got gelato.

The kids also rode a ride that looked like a gondola in Italy and that was about all we did, other than buy a t-shirt for Noah (who has outgrown most of his from last year) and ride the sky ride to get from one place to another. We would have liked to try one of the water rides (Escape from Pompeii looks fun) but it wasn’t quite warm enough to get soaked. We also considered riding the sightseeing train that circles the park, but there wasn’t time as we had a long drive back to Maryland and we needed to leave mid-afternoon.

We enjoyed our trip to Busch Gardens but part of day seemed almost long enough. We all agreed it’s not as good an amusement park for us as Cedar Point or Hershey Park. What we all missed was any moderate coasters. There were kiddie rides and big thrill rides, but nothing that fit our niche. I am not the daredevil I was (briefly) in my teens and early twenties, but I do still enjoy a classic roller coaster and there was nothing like that. I thought Noah, who’s a little braver than me, could probably handle Loch Ness Monster, but he took a look at it and said no.

So, we bid adieu to Europe and drove back to Maryland. We almost always go out for Indian when we return home from vacation, so we did that. We weren’t quite finished being tourists, though, because the cherry blossoms were in bloom and we went to see them the next morning.

We were lucky to catch the peak this year, as it only lasts several days, and we’d been gone over a week. It was the latest peak since 1993, according to the National Park Service, occurring about a week past the average date.

It was also a beautiful Sunday morning, in the low seventies and sunny, so we expected crowds, both for the blossoms and for a ten-mile race that was taking place along the Tidal Basin. Our friend Tom (June’s friend Talia’s dad) was running and we looked for him as we watched the race go by, but we didn’t see him. Getting across 15th Street to get from the Metro stop to the blossoms turned out to be quite the challenge, with the race going down it. We waited around ten minutes for a break in the race and were just about to sit down on the curb and eat our picnic breakfast right there when suddenly a bunch of other people who were also waiting to cross the street made a break for it and we all dashed through the middle of the race.

We walked the whole perimeter of the Tidal Basin, something I almost but not quite take for granted now, after years of having kids too little for that hike. Anyway, it was lovely. And June had fun climbing the rocks at the FDR Memorial, as always.

We’ve been home almost a week now and are well into the routine of work and school. The cherry trees along the streets in Takoma Park are well past their peak. We keep seeing the white petals blowing through the air (the other day Noah came home from school with his curls full of them) and little green leaves are replacing the flowers. Our dogwood is budding, the daffodils are almost finished, and there are tulips in our back yard. The flowers and flowering trees of home are sweet reminders of the flowers of the road—at the altar at YaYa’s church on Easter morning and in the gardens of the Biltmore and along the highway in North Carolina and in the plantings of a theme park version of Europe.