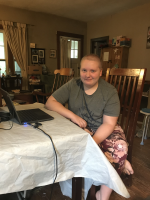 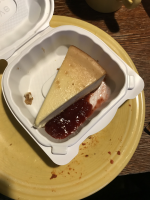 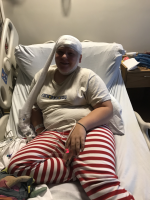 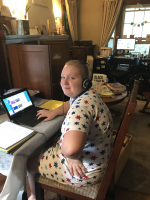 North’s in high school now. In a sign that this was coming, Tuesday of last week instead of attending the virtual trans kids support group for middle school students, they went to the high school one. They said they only knew one other kid, a ninth grader who’d moved up with them, and the rest were seniors. Apparently college was a big topic of discussion and North felt a little out of place. There have always been a lot of kids moving in and out of group, so I imagine they’ll get used to it, especially if some more ninth and tenth graders they know from their two years in the middle school group come to future meetings.

Two days later North had a two-hour virtual high school orientation. There were speeches from administrators and older students and even a performance from the marching band. Beth guessed it was filmed in the Before Times and repurposed, because of the lack of masks and distancing. Then all the kids broke out into ten-minute sessions with each of their teachers. The teachers had been given a speech to read a different one for each period so everyone would hear all of them, but only some of the teachers read them, and one of them got the periods wrong so North heard it twice. Anyway, it was nice to see the teachers and hear the non-scripted parts of their presentations and learn a bit more about each class. It wasn’t how I imagined North’s high school orientation would be, not until recently anyway, but it still felt like a milestone.

Around 3:40 that afternoon, North started having more and more frequent seizures. There was about twenty-five minutes between the first and second one and about ten between the second and third and after that they were coming every few minutes for the rest of the afternoon and all evening. North was afraid they wouldn’t be able to get to sleep, but they did and they slept normally. However, in the morning, the seizures picked up right where they’d left off, so around ten o’clock, after consulting with a neurologist at Georgetown who’d seen North recently, Beth took North to the ER at Children’s. It’s our preferred hospital, but we’d basically been told not to come back to the Holy Cross ER, so that wasn’t an option.

Around eleven-thirty, Beth texted to say they were in an exam room (the same one North was in the night they had breathing trouble) and the seizures were somewhat less frequent. By one o’ clock, a neurologist had examined North and ordered an EEG. Remember how we had one scheduled for the first week of September at Children’s and we were trying to see if we could get one earlier that than through Georgetown? Well, when that one was scheduled it was two days after the Children’s one, but it was an at-home EEG that North would be hooked up to for twenty-four hours. We’d been trying to decide which one to cancel and which to keep, as there were pros and cons to each, but now that decision was out of our hands. We were all glad because the sooner we got the EEG data, the sooner we’d have a diagnosis for North’s 504 meeting.

By this time, North was seizing about six times an hour, which was a notable reduction, but often enough for all the relevant medical personnel to see it. North had yet another covid test (the third in a little over six weeks) and it was negative so they could be admitted into a non-covid room. Their room was smaller than the last one because it was designed as a single and the view was not as full of iconic Washington architecture, but you could see the Basilica at Catholic University and the McMillan reservoir, so it wasn’t too shabby either. Better yet, there was a couch that expanded into a bed in the room, so Beth didn’t have to sleep in a chair. She even got sheets.

One thing Beth noticed about the neurologists was that they didn’t want to use the word “seizure” for what was happening to North, preferring words like “episodes,” or “spells.” I said if someone had cast a spell on them, it was probably outside the doctors’ purview. Beth said we might need to go to Hogwarts Hospital. That evening Beth also learned that Children’s is now allowing more than one parent to visit at a time, so we made plans for me to come the next morning.

It was 8:45 by the time North got hooked up to the EEG, which was going to run continuously overnight and most of the next morning. The EEG specialist did some tests, inducing seizures with a strobe light and by having North hyperventilate. Beth later said she really hated that part.

Back at home, Noah and I ordered a pizza and mozzarella sticks and two slices of cheesecake and we watched The Lighthouse, which was even stranger than what I expected, but also very good and thought-provoking. Noah told me later he liked the way the film used sound and explained the difference between diegetic and non-diegetic sound to me. I felt kind of guilty about having a fun evening with him while Beth and North were at the hospital, but Beth said, “It’s good to get a break. And it’s good for him to have quality time with you.”

Saturday morning, Beth texted that North would be discharged later in the day, but she wasn’t sure when, so I took a bus and a train and another bus to the hospital. It took two hours, because I spent an hour waiting for a hospital shuttle that doesn’t run on the weekends. I really should have researched that ahead of time, but I thought I had the route to Children’s down pat from all the times we went for trans kids’ group.

While I was trying to get to the hospital, a neurologist came and said the EEG looked normal. There was no unusual brain activity during the seizures. This was more or less what we expected—that they weren’t epileptic—but it was good to get that data point so we can move forward. And now North has a new diagnosis that goes under the Functional Neurological Disorder umbrella—they are psychogenic nonepileptic seizures, which means they have a psychological rather than physical cause. And speaking of the seizures, they were coming much less frequently by now.

I finally arrived around eleven, and sat with North while Beth took a shower and watched as the nurse unhooked them from the EEG. Then she came back with the discharge papers and we signed them and then went to the hospital cafeteria for lunch, to Starbucks, and home, where North rested for most of the rest of the day.

Sunday Beth and Noah went on a drone-flying expedition at a park with a creek and the ruins of an old mill. I would have liked to go, but North was feeling sick to their stomach, so I stayed home with them. North also didn’t feel up to finishing their summer homework—they still had three pages of their math packet and an essay that needed expanding—and we skipped our traditional last-night-of-summer-vacation ice cream, so it didn’t really feel like the last day of summer break. Or maybe it was because we knew the first day wouldn’t feel exactly like the first day either.

But the first day came anyway. North had four of their seven classes: English, Ceramics and Sculpture, Yoga, and Algebra II, each an hour long in theory, though some let out early. There was a little technical difficulty getting into the Zoom room at the beginning of first period, but in general it all went pretty smoothly. We were all curious about how a ceramics class would work online, given the lack of pottery wheels and kilns in most people’s homes. The answer is it’s going to be sculpture class, “with found materials.” Fair enough.

North had a short seizure during second period and then none until fourth period when they had another small one and then one that was so violent they fell out of their chair and hurt their arm and side. Beth turned the lecture off and North went to rest in our bed, where they ended up sleeping for an hour. They are often tired after a long seizure. When they got up they checked to see if the recorded class was available online yet (they are all kept for three days so students can watch one they’ve missed) but it wasn’t, so they did the homework the teacher had assigned and a half page of the summer math packet.

Next they wanted to make brownies, even though they were still feeling sick and wouldn’t eat any of them. I found this odd, but I helped supervise so they wouldn’t end up injuring themselves.

Today North had the rest of their classes: Japanese I, U.S. History, and Biology. It would be nice to see the next steps of this medical journey as clearly as a class schedule, but we can’t, so we’ll have to take it one day at a time.