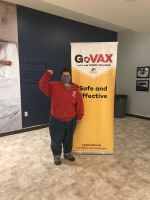 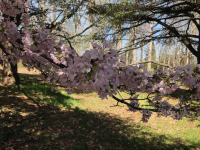 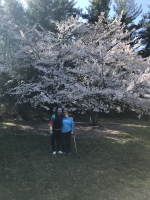 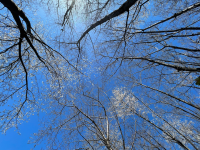 The second night we were back from Deep Creek was a Tuesday, which is family activity night, and it was Beth’s turn to choose. She went with dyeing Easter eggs. Last year when Noah was unexpectedly home for this endeavor, I told him it was nice to have him here, but I hoped he wouldn’t be doing it with us next spring. Oh, naïve early pandemic self… I think I said the same thing when we carved jack-o-lanterns in October, by which point I should have known better. So this time I didn’t jinx him and I did not comment on his presence or speculate on when he might go back to school. It’s strange starting the second round of annual milestones, like the spring birthdays and Easter, but that’s where we are, at least for now. I have to say, though, being vaccinated and seeing the numbers of vaccines administered go up every day does make it seem like there’s light at the end of the tunnel, even though I know there’s still a long way to go.

We dyed the eggs a wide spectrum of pastel and deeper shades and then we decorated them. We have a collection of little felt hats we put on Easter eggs and three of our eight eggs sported those, with stickers for facial features. A couple of the eggs were adorned with stickers of butterflies, ladybugs, flowers, and the sun, for a spring theme. North made a trans flag egg, for International Trans Day of Visibility, carefully dyeing each stripe and letting it dry before applying the next one. It came out really well.

The next day, Beth and I set out around 9:40 to drive to Hagerstown. Our appointments were at 11:30 and 11:45 and we didn’t want to be late. It started to rain about halfway through the hour and fifteen minute drive to the mass vax site, a big empty room that used to be a furniture store showroom. We waited in the car for a while to avoid arriving too early (per the instructions), but around 11:10, we went inside, where we progressed through various checkpoints where our QR codes were scanned and our identification checked, and we answered some health-related questions. The QR code was scanned at every stop, at least three times, maybe four. I guess they didn’t want anyone without an appointment sneaking in. There was virtually no wait, other than going through the stations, even though we were early. In fact, we were moving along so briskly I slipped and almost fell on the wet floor where people had tracked in the rain. By 11:25, Beth and I were both vaccinated and sitting in folding chairs in the post-vaccination observation area. We were out of there in forty minutes total, including a visit to the restroom afterward and a stop at the selfie station. The letter O in the GoVax sign is in the colors of the Maryland flag, for all you non-Marylanders.

It was still raining when we left the shopping center. We’d planned to have a picnic lunch and we were going through with it, 55-degree, rainy weather and all. Beth had located a state park with tables under shelters. We got drive-through Greek food and ate our veggie gyros, cheese pie, Greek salad, and baklava, while watching the rain fall on the lake at Greenbrier State Park. We could see fish jumping out of the water and three ducks swimming and a gull circling around over the lake. The whole time we were there I saw one other person, a man walking alone on the beach in the distance. It was a very covid experience.

Back on the road, Beth saw a sign for a Krispy Kreme and remembered you can get a free doughnut if you show them your vaccination card, so it seemed incumbent on us to do that. You should know you don’t get a choice of flavors if you’re planning to take advantage of this offer. It’s all glazed. I saved mine for later, as I’d already had dessert and Beth gave hers to the kids to split when we got home. There was a Starbucks and a Mom’s Organic Market in the same shopping center, so I got a honey-almond milk flat white and Beth got a few groceries we needed.

I had only very mild soreness in my arm that evening, not bad enough to stop me from sleeping on my side. I was kind of foggy-minded the next day, but it might have been because I was up earlier than usual two days in a row. Beth said she had some aches and pains but nothing outside the usual range, so neither of us knew if we had any side effects. And because it was the Johnson and Johnson vaccine, we don’t need a second dose.

On Thursday, Governor Hogan opened preregistration to all Marylanders sixteen and up, and Noah registered that very day.

The cherry blossoms in D.C. peaked the weekend we were in Deep Creek and we weren’t able to get to the National Arboretum to see them until the following weekend. We’d decided not go to the Tidal Basin because the path is quite narrow and it’s really impossible to avoid close contact with other people when it’s crowded. And it’s almost always crowded when the cherries are in bloom, unless you’ve missed the peak by quite a bit or it’s pouring rain. The Park Service was discouraging people from going down there, although as far as I know, they didn’t actually close it off, like they did last year.

We found the National Arboretum an acceptable substitute last year, so we went there again this year. Beth wanted to go in the morning and when the teens were unenthused about her plan to leave the house at 9:30 on a Saturday morning, she bribed them with the promise of Starbucks. Now you know what to offer my kids if you want them to do something–they’ll do it for an iced almond milk latte with toffee syrup, a doughnut, and some lemon poundcake.

There are more kinds of cherry trees at the Arboretum than at the Tidal Basin, so the bloom is less synchronous. Beth printed out information about the different kinds of trees for a self-guided tour and sure enough, the trees the pamphlet identified as early bloomers were all finished and leafing out, the middle ones were either at or past peak, and the late bloomers were still tightly budded. We walked for over an hour among the pretty white and pink blooms in the bright sunshine of an April morning.

It’s been a very cheering week. I hope you are feeling of some of the hope of early spring, too. Happy Passover and Happy Easter!