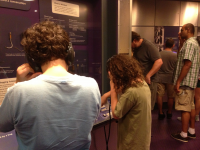 We went to the International Spy Museum on Saturday, with the kids and Noah’s friend Sasha.  We all memorized details of undercover identities we chose. June enjoyed crawling around in the simulated air ducts and spying on the people below through small windows (she did it three times) and admired many of the gadgets on display, particularly a pistol disguised as a lipstick.  She said she hoped no spy ever blew her lips off while using it. At one point she asked me if spies are “good guys or bad guys” and then we had a discussion about moral relativism right there in the museum.

The boys participated in a large group crime-solving activity having something to do with a nuclear detonator and toured the exhibit about villains from James Bond movies.  Sasha bought a Spy vs. Spy book at the gift shop and June got some disappearing ink (it actually works!).  We saw the Georgetown mailbox Aldrich Ames used to mark with chalk to communicate with his co-conspirators. I remember that detail from the case so it was kind of creepy to see that particular artifact.

Afterward we had dinner at Chinese-Japanese restaurant and got Fro-Zen-Yo. It was a highly satisfactory outing, even if June did get bored in the museum long before the boys did. (I took her to the Portrait Gallery across the street for a change of pace.  Her preschool class took a field trip there years ago and whenever we set foot in this museum she always says, “Oh this is where Gabe set off the alarm.”)

That evening I told Beth I didn’t think I could be a spy, that I didn’t think I had it in me.   Beth reminded me that the best spies are the ones no one would suspect, those who are above reproach. I suppose that was a compliment.

Earlier that week I was talking to my sister on the phone and we discussed how while I am a more private person than she is, Beth is even more private than me. There’s a reason I’m the one in the relationship with the blog, but also a reason there’s a lot that goes on in my life that never makes it into this space.

A few weeks ago I was tagged by Tyfanny from Come What May with an eleven-question meme.  Nothing in it compromises national security and the questions might let you get to know me a little better, so here goes.

We have pizza for dinner every Friday, alternating takeout and frozen. This was a tradition my mom instituted during my early teens when she was a single mom who was both working and getting her Master’s degree, except then it was always takeout. I’m surprised we didn’t subsist entirely on takeout given how busy she must have been.  The tradition has lived on—she and my stepfather still have pizza every Friday.

2. When your bed is made, how many pillows are on it? And then, how many do you actually sleep with? If there is a difference, please explain why.

Four at all times. (Except when the kids have knocked them to the floor, which is pretty often.)  Two of them are feather pillows and pretty flat.

3. How far away do you currently live from where you grew up?

I grew up mostly in and around Philadelphia and now live in the suburbs of Washington, D.C.  Since my mom and stepfather moved to Oregon in January, I now have no family left in the Philadelphia area, which makes me feel unmoored if I think about it too long.

I can’t help you here. I don’t have a smart phone myself and most of the time I can’t even remember how to retrieve the messages from my cheap and simple cell phone, which is how techno-savvy I am.  Guess who posts this blog? Hint: it’s not me.

5. What television show (that is currently on the air) do you really, really love?

I am not currently watching any television shows, but I was recently wondering if I stayed up later or was better with technology if I’d be watching Under the Dome, because I’d be interested to see how they stretched the book into a television series.

6. Are you excited for the start of football season? Why or why not?

I don’t follow football, or any other sport, though I used to enjoy watching baseball when I was a kid. When the Phillies were in the World Series in 1980, my dad took me to several of the games, including the winning one.

7. What was the last book you read, and did you enjoy it?

Lighthousekeeping by Jeanette Winterson.  I picked it up at the library a couple weeks ago and realized within the first few pages I have already read it, but it was so good I kept reading it anyway.

8. What was the last movie you saw (doesn’t have to be at the theater, maybe you caught it on Netflix), and what did you think of it?

African Cats, a documentary about lions and cheetahs.  I took the kids to see it few weeks ago at a theater that plays second-run movies in the summer for $1.  We all enjoyed it, though I thought the narration (by Samuel Jackson) was a bit cheesy.  The lives of wild animals are dramatic enough without overdoing it.

9. Tell me about your favorite pet, from any time in your life.

When I was a kid we had a Siamese cat named Alexei my parents got when I was a toddler.  He was sweet and affectionate and good-natured, nothing like the stereotype of the high-strung Siamese.  He lived to the age of twenty and died the week I graduated from college.  (Amazingly, he wasn’t the longest-lived of my mom’s cats. She had another cat live to the age of twenty-two.)

10. What kind of music can you listen to, no matter what mood you’re in?

I have sometimes joked my iPod is like one of those Pandora stations based on a single artist where you hear that artist’s songs interspersed with others Pandora judges similar. In my case, it’s the Joni Mitchell station.

11. Do you already have a wish list started for Christmas? What would you like to see under the tree this year?

Hmm. Margaret Atwood has a new book out, the third in the trilogy that started with Oryx and Crake, but I don’t know if I can wait for Christmas to read it. Maybe iTunes gift certificates. I work at home and listen to music a lot while working and I’d like to have more digital music.

Now I’m supposed to come up with eleven more questions and tag eleven people to answer them.  This is where this always falls apart for me, coming up with large numbers of people to tag, but I should be able to generate a list of questions. Here goes:

1. Do you think you have the skills to be a spy? Why or why not?

3. Where and when would you want to be stationed? Pick any historical period.

4. What would you choose as your undercover name?

5. How would you answer June’s question?

6. How do you feel about the NSA surveillance program?

8. Have you ever accidentally overheard something about yourself?

9. Do you have anything in your email archives you wouldn’t want your spouse or kids to read? (You can say yes or no without specifying.)

10. If someone had been spying on you all day yesterday, what would he or she have learned?

11. Do you ever spy on your kids? (Anything from eavesdropping to reading their email.)

I am not going to tag eleven people. In fact I’m not going to tag anyone directly, because I wouldn’t want to blow your cover, but if you have a son who pitched for Canada in the Little League World Series last month or if your daughter interrupted your game of Bejeweled the other day to ask you the meaning of life, or if you recently mustered the courage to reveal a traumatic part of your past on your blog, you know who you are.  Your instructions are under the fallen log in Sligo Creek Park. Or if it’s more convenient you can read them on Tyffany’s blog in the August 9 post.

p.s. Anyone reading should feel free to answer any of the questions in the comments section. You don’t have to tackle them all.