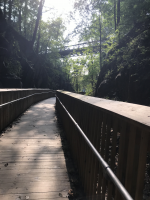 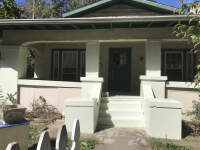 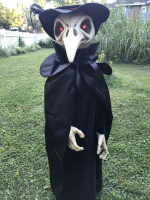 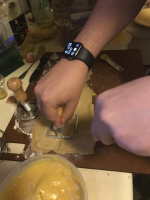 Beth’s colleagues often ask how North’s doing at the beginning of phone calls and the other day I heard her answer, “Surprisingly okay” and for the most part, that’s true. Not much changed for a long while and we all adjusted to the new normal, as much as we still want the seizures and other symptoms to end.

The long-awaited urology appointment was the last Monday of September and it was kind of a bust. The doctor went over the results of the spinal MRI, noted there was no compression on the urethra contributing to North’s difficulty urinating and said she’d see North again in three months if nothing changed. We were all disappointed by the lack of a treatment plan. In the interim, though, Beth got a new diagnostic MRI scheduled, this time a brain MRI with a spinal tap. It’s happening later this week.

Then two days later, in dual setbacks, North was diagnosed with a second UTI and dropped a pasta sauce jar on their bare foot and bruised it badly. They were back to using the wheelchair to get around the house for a day or two. We got their foot x-rayed, but it was not broken, so their physical therapist gave them some exercises for it. It’s still bothering them, but it seems to be getting better.

On the upside, North’s interim grades (for the midpoint of the first quarter) were good, all As and Bs. This was a relief as the quarter got off to a rough start because they missed a lot of class, due to being in the hospital, and had trouble keeping up.

Noah’s doing well, too. His classes seem more challenging than last semester but he’s not overloaded with homework. His philosophy professor was so impressed with his work he suggested he consider majoring or minoring in the field, and Noah likes the class well enough to consider doing it. It would be a second minor, as he’s already declared one in computer science. He also attended an online informational session about study abroad programs and is seriously thinking of going to Australia next fall. He’s working as a video editor for several shows on ICTV and he’s also going to help a local filmmaker shoot and edit a play his neighbors are putting on, based on The Invention of Hugo Cabret. (It’s being filmed because there will be no live audience.) A friend of mine said he seems to be “flourishing” and he is, though of course I wish he could be back at school with his friends (and using the film studios that drew him to Ithaca in the first place).

The first weekend in October we visited Benjamin Banneker Historical Park and Museum, mainly because it’s adjacent to a trail we intended to hike and we thought it might offer a wheelchair accessible entrance to the trail, but we detoured into the park and it ended up being an interesting side trip. An educational one, too, as it turned out neither of the kids had heard of Banneker, a very famous Marylander. We walked up to the reconstructed Banneker family cabin as a Brownie troop was taking a tour and as Beth, Noah, and North waited at a distance outside, I explored the vegetable and herb gardens.  When the Brownies had left, the park ranger offered to let us in the cabin and give us her talk about it. We took her up on it and then we browsed through the little museum nearby before tackling the trail.

Trolley Trail #9 trail, as you might guess from the name, is built on the track bed of an old trolley line. It’s part boardwalk, part asphalt, and goes through a wooded area along a creek. Noah flew his drone to a little waterfall and over the tree canopy. The trail is sloped, so the whole mile and a half down, knowing we’d have to push the wheelchair back up, I was fretting a little, wondering if we were biting off more than we could chew. But with three of us to take turns, it wasn’t as bad as I feared and it was a pretty walk.

The following week we got our porch painted a new color. When we moved into this house in 2002, the house was tan with gray trim, or at least I thought it was gray. I learned just this week that everyone else in my family perceived it as a sort of olive green. It’s amazing the things you don’t know about the people you live with, I swear.  Nine years later we painted most of the trim dark green but left the porch floor, columns, and steps gray/green. My first idea this time around was to match the porch to the trim again by having it painted dark green, but on consideration, we decided if it wasn’t quite matched it would look funny so we went with a very pale green we thought would complement the darker green. I think I like it. It reflects more light into the living room, which is nice, but it also shows dirt more. I am trying not to let the fact that we painted at this exact moment because we were cited by the city for peeling paint take the pleasure out of this little makeover.

Once the porch was painted we started decorating it and the lawn for Halloween, and if you know my family in person or through this blog, you know that’s cheering. We don’t have everything out yet, but we’ve made a good start. We all bought one new item this year and mine was the charming fellow in the third picture. I picked him because he looks like he’s wearing a plague mask and that seemed just perfect for 2020. I even violated my own no-more-Halloween-decorations-that-require-batteries to buy him.

In other seasonal news, this weekend we made pumpkin ravioli from scratch. I roasted two little pumpkins and made the filling and a pumpkin-walnut-sage sauce to go on top. Beth rolled out the dough in Noah’s pasta machine and he used the hand tools to fashion the ravioli out of the sheets. It was quite a project, but the results were delicious.

Today was Columbus Day, or Dia de la Raza, or Indigenous People’s Day—take your pick. In normal times in our school district, parents are invited to observe their kids’ classes on this day (because a lot of parents have it off but the schools are still open). At some schools it’s called Visitation Day. I’ve always enjoyed watching the kids’ classes and the name is pretty amusing, too. It’s as if we’ve been invited to watch a séance.

This year there was no notification from the school about being invited to watch your kids’ classes on Zoom, but I know a lot of parents of younger kids are doing it every day and nothing was stopping us, so we decided to observe two of North’s classes—English and yoga. We chose English because it was kind of unorganized for a while when the teacher quit and we wanted to see if the sub had got her footing yet. I’ve been curious about yoga because North usually does it in their room and we’ve never seen or heard little bits of it, the way I have with most of their other classes.

On the morning of Visitation Day, North woke up with a new symptom. Their right hand was clenched in a loose fist and they were unable to open it. My first thought went to the two complex migraines North’s had that left their hands and feet paralyzed but this was just one hand and the affected hand was not cold to the touch the way their paralyzed extremities in past episodes.

This was discouraging, but we carried on with the day. English started at nine and at the beginning of class, the teacher instructed the class to read “The Lottery,” annotate it, and write a paragraph about it. She gave them thirty-five minutes to complete this task and said she’d take questions at that point. I was a little disappointed in this lesson plan because it seemed like discussion would be a better use of  scarce and precious class time (each class has two one-hour slots a week, if the teachers use all their allotted time). The reading and writing could have been done before or after class, as homework.

Anyway, there wasn’t much to watch, so while North worked I read the paper, checked my email and some blogs I read regularly, and eventually since it was an English class, picked up Beloved, which my book club will be discussing on Zoom later this week.  At 9:40, the class reconvened. There were no student questions so the teacher asked a few, mostly about setting, and then just as things could have gotten interesting, she dismissed them to finish other work. North took an online grammar quiz and aced it. And then class was over. The discussion of “The Lottery” took a little over five minutes of class time. The whole experience made me glad North had already read this excellent story in middle school and this wasn’t their whole exposure to it.

Since we watched so little of English, I asked North if we could watch sculpture but they were insistent the agreement was two classes, so I didn’t push it. I did come over to hold their head up during at least two seizures, and I saw the teacher holding up a polyhedron that seemed to be made of folded paper, but North was wearing their headset so I don’t know what she was saying about it. I’m guessing North might be making something similar some time. Sculpture wrapped up after twenty-five minutes.

Yoga started at twelve-thirty. The teacher showed the class a yoga video and had them follow along. The sequence started with tabletop and included (not in this order and with most poses repeated) cobra, extended side angle, lunge, plank, warrior one, and warrior two, ending with corpse pose. North said it was physically harder than usual. Often the class meditates instead of or in addition to doing yoga poses. The class lasted about a half hour. Usually North attends this class in their room, on their bed, but after watching them do it on our bed, noticing how it was hard to balance in the standing positions on a bed, we are reconsidering this set up. During yoga class, North’s hand unfurled. After class I told them, “See. Yoga is good for you,” and they laughed, but I meant it. I think it could be good for them, physically and mentally.

After yoga, Beth and I went on a little date, our first since before covid, probably since our anniversary in January. We were nudged into the realization that we should do this by the fact that we always have a lunch date on Visitation Day in between spying on the kid(s)’ classes. It was rainy and in the high fifties, so not the most inviting weather for a picnic, but not forbidding either if we had shelter.

We left before North’s last class of the day, algebra, which met during a gap between Noah’s ethnomathematics and philosophy classes so we left him in charge of sitting in the living room and making sure North was in a comfortable position if they had a seizure.

We got arepas, plantains, and teqeños from Arepas Pues in Silver Spring (highly recommended if you’re local) and ate them in a pavilion in Wheaton Regional Park. Afterward we took a little walk through the woods and down to a pond. The path was scattered with the first of the season’s fallen leaves and pine needles. We picked up coffee and hot chocolate on the way home. It was nice. It was better than okay.