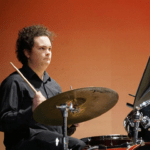 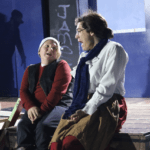 “It was a big day for Noah,” Beth said when it was all over.

It started with him dressing up in a suit for the first time ever. There have actually been a lot of occasions when we considered buying Noah a suit—mostly notably when he was in sixth grade and we got legally married, and for various oral presentations he’s made in high school. The C in CAP stands for Communication, so there have a been a lot of presentations over the past few years. But we got married in our living room, and he had a school-issued tuxedo shirt for band that year, so a suit seemed like overkill and then he had a habit of saying, “I really should have a suit for this,” a day or two before or he needed to make a presentation so we never bought one.

This time he thought to ask well ahead of his senior CAP presentation. The senior presentation summarizes five school assignments—two required and three of the students’ choosing—and explains what the student learned in them and in CAP in general. Noah spoke about and played clips from the movie he made this fall about the process of making his Halloween costume, the podcast of interviews with parents and alumni of his preschool, a dystopian film about social media, a paper comparing 1984 to the Trump campaign, and a research paper about a local hospital’s plans to move and the impact of the move on the community. The assignments spanned his four years of high school and gave a nice overview of his skills as a researcher, writer, audio technician, and filmmaker. It’s also the last big assignment he has in a CAP class because in their senior year, CAP students mostly take classes outside of CAP. The senior seminar will focus on interview and resume skills before it ends in late January and his AP Lit class will last until the end of the school year, but other than that, he’s finished with CAP.

Around one o’clock in the afternoon of his presentation day, there was a bomb threat at his school and everyone had to evacuate and stand out in the cold for an hour and a half until the time school would normally be dismissed. I think it’s telling that, after hearing from the school, texting him and ascertaining he was alive, the first thing Beth and I both thought of was to be grateful it happened after his presentation, which was during the second period of the day. While they were standing around and chatting, his senior seminar teacher told him he’d passed. (Anyone who fails gets a phone call from a teacher that evening and has to do the presentation again, a possibility much dreaded by CAP students.)

Afterschool activities were cancelled while the police searched the building, but they completed their search in time for evening activities to go on as scheduled, which was nice because Noah had his penultimate high school band concert that night. He got home at his usual time and studied for a King Lear test before we had an early dinner of spinach quesadillas with black beans and corn on the side (which North ate an hour before we did before hopping on a bus to play rehearsal). By six o’clock, we were on our way to his school.

There are five bands at Noah’s school: two jazz bands, the ninth-grade Concert Band, Symphonic Band, and the Wind Ensemble. Noah plays percussion in the Wind Ensemble. There were a couple seasonal nods in the jazz selections. The Jazz Combo played “Autumn Leaves,” and “Let it Snow! Let it Snow Let it Snow!” The non-jazz bands play in order of expertise, so they get better as the concert goes along, not that any of them sound bad. Blair has a great music program.

So, the Wind Ensemble played last. Noah got to play drum kit in their first song, “Ride.” That’s a rare treat, though it also makes him a little nervous because it’s more visible than most percussion roles. He played snare, triangle, and chimes in the next piece. The real showstopper (and I guess it literally stopped the show, being the last song of the concert) was the “1812 Overture.” They played a version arranged without strings and also without cannons. Later Beth and I both made the joke that on a day with a bomb threat the cannon-free version might be better. But even without cannons, they rocked it. Noah played snare drums, triangle, and tambourine. And he got a chance to do it again the next day when they gave a shortened version of the concert for a group of visiting preschoolers. (He says the preschoolers were an appreciative audience, clapping every time the music stopped, even if the musicians were only warming up and doing scales.)

After the concert, Noah noted that at his next band concert, the band teacher will be calling him up to the stage and announcing where he’s going to college. It’s a spring concert tradition for all the seniors. It was something to think about as we drove to the theater to pick North up from their last rehearsal before Peter and the Starcatcher opened, because that happened the next day…

Peter and the Starcatcher is a prequel to Peter Pan. I’d seen North play Peter in a scene during their acting class showcase last month and few more scenes done by the whole cast at a preview event a week before opening night, but other than that, I didn’t know much about it. North is playing four roles, two in each of the rotating casts. In the older cast, they are Alf (a sailor) and a mermaid. In the younger cast, they are Slank (the captain of one of the two ships), and Fighting Prawn (the king of the fictional island of Mollusk). Being in two casts meant North had to be at nearly every rehearsal for two and a half months. It’s been intense and it’s meant a lot of late nights.

Opening night featured the older cast, who are (mostly) in seventh to twelfth grade. The set was beautiful and quite elaborate, featuring two ships with moving parts and an alligator that runs along the ceiling. North’s part as Alf was bigger than I thought from what they’d been saying and I also didn’t know Alf had romantic scenes with a character played by an eighteen-year-old boy in drag. But that’s part of why we go to the theater—to be surprised.

Later North told me they’d been assigned some of another sailor’s lines at the last minute because of an illness that caused several parts to get re-arranged and there was supposed to be a kiss but the director nixed it because of the age gap between North and the actor playing their love interest. “Did you want to kiss him?” I asked and their eyes got big and they said, “No!”

It was a fun show, with good acting in many roles, but especially the girls playing the pirates Black Stache and Smee, who had excellent chemistry with each other. North’s often cast in comic roles and Alf was no exception. They’re playing more against type in the other version of the show, at least with Slank, who is something of a villain. Fighting Prawn is comic, too (though I think the script’s attempt to re-write the Indians of Peter Pan only partly succeeds in erasing the racism of the original).

You might expect flying in a show about Peter Pan, and other than the alligator and a stuffed cat, there isn’t in this one, but nevertheless, the theater’s announcements about the upcoming show said it was “taking flight.” It’s been quite an exciting few days here, watching our kids test their wings in endeavors academic, musical, and theatrical.