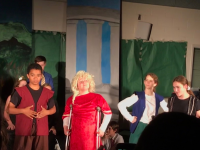 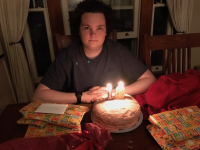 There always seems to be a week in fourth quarter when all the things happen. This year it was the week that spanned the end of April and the beginning of May. Noah’s band went to state band festival on Tuesday, North’s school play ran from Wednesday to Friday, Noah’s spring band concert was Thursday, and Noah turned eighteen on Friday.

In mid-March Noah’s band did well enough at the county-level band festival to advance to state. This wasn’t a surprise as he’s been in a band that went to state most years since he was in sixth grade. The only exceptions were seventh grade when his band didn’t qualify and ninth, when he wasn’t in band, due to schedule conflicts. This record is a testament, in part, to the talented and dedicated band teachers he’s had over the course of his elementary, middle, and high school years. Even though it wasn’t a surprise they went to state, I was pleased because these competitions mean a lot to Noah. At state this year, the Blair Wind Ensemble earned all superiors. They were judged the best high school band in the county and one of the five best in the state.

Just two days later it was time for the spring concert. North had to miss it because they were acting in the play and that was sad because it was Noah’s last high school band concert. I am not going to say it was his last concert because I hope he continues with percussion in college. For nine years, it’s given him a much needed artistic outlet.

There are five bands in Noah’s high school so the concerts tend to be on the long side—three hours isn’t unusual. They are also very good, so the length is fine if you’re expecting it and you’re not worried about how much homework your kid has to do when he gets home. We were expecting it and arranged for another actor’s mom to drive North home from the play. And I wasn’t worried about Noah’s homework, because he didn’t have any that night. So we settled in.

The Jazz Combo and Jazz Ensemble go first and second. Among their numbers were standards like “All of Me,” and “Girl From Ipanema.” The female vocalist sang a Dinah Washington song I’d never heard of but liked, called “Relax Max” and the male vocalist sang, “Crazy Little Thing Called Love” which works surprisingly well as a jazz piece, though I don’t tend to think of Freddy Mercury as a jazz musician.

Concert Band was next. This band consists mostly of ninth graders. It’s the only non-audition band of the five. They played a song written to commemorate a mining disaster (these band pieces often have morbid back stories), “Arabian Dances,” which sounded familiar so I imagine Noah’s played it at a concert at some point, and “Eye of the Tiger,” which is a perennial band concert favorite, for reasons I don’t understand at all. I know Noah played part of it at least once at band camp during an 80s medley and I’m pretty that wasn’t the only time. I mean, I don’t have anything against it and there’s definitely some nostalgia for the parents, but still, it’s puzzling.

I guess it’s a sign your kid has been in band a long time when you recognize at least one piece all the bands are playing. For Symphonic Band (the intermediate band) it was “The Heart of Madness,” which was inspired by three stories by Edgar Allan Poe. At one point, you can hear the tell-tale heart beating away. Noah played that at band camp one year. He might have even played the heart part.

The Wind Ensemble played last. As usual, Noah was busy running back and forth between the different instrument stations. He played snare, marimba, xylophone, and triangle. The marimba and xylophone were positioned off the side of the stage instead of the back, so we actually got to see him playing, which was a treat. On the marimba, he used four sticks at once. I’ve seen him do that at home on his bells, but never on stage. It’s an impressive sight. The Wind Ensemble played three songs. The last one, “First Suite in E-flat for Military Band,” had three movements and apparently it’s very difficult. The judges at festival praised the band teacher for being “brave enough” to try it.

Before each band’s last piece, the director called the seniors to the front of the stage and read a paragraph the students had written about their experience in band and in which they announce where they are going to college. I’ve always liked this part of the spring concert. I thought I’d cry when the band teacher read Noah’s blurb, but I managed to keep it together. Noah was the only senior going to Ithaca, but between the band concert and the orchestra concert Beth and Noah attended on Tuesday there were at least a couple each going to RIT and UMBC.

After the concert was over, as we walked to the car, Noah said “I think that went well,” which for him qualifies as exuberance. He still has one more band performance—he’s playing at his own graduation—but I couldn’t help thinking he was right, that it’s gone very well, all of it.

Friday we finally got to see the play, on closing night. Rehearsals for the play started in January or February. Both Beth and I had been a little concerned because there weren’t as many as we’d come to expect from last year’s school play, especially at the beginning, and North kept mentioning that people didn’t know their lines alarmingly close to opening night. From what I could tell the director was pretty laid back compared to most directors North’s had, either at drama camp, school, or Highwood.

We needn’t have worried. It was a fun play and a really good performance. It’s about a group of students studying for a test on Midsummer Night’s Dream and it consists of scenes from that play, interspersed with dialogue from the students, who offer explanations of what’s going on as well as commentary. Noah said he didn’t think the frame narrative offered much, but I think it’s probably very helpful for middle school audiences unfamiliar with the play, and it added humor, too, especially when the Shakespearean characters responded to the students.

There were two dozen kids acting in the play and everyone did a good job. The kids playing the four lovers delivered their long Shakespearean speeches with feeling and without stumbling over their lines. Puck and Oberon were endearingly mischievous. Hippolyta was a majestic Amazon queen. The kid who played the wall in the Pyramus and Thisbe skit (the play-within-the-play-within-the-play) was a ham in the best way. North was another one of the players performing at Theseus and Hippolyta’s wedding. The director had asked them if they wanted a male or female part and North said either, so he gave them Flute/Thisbe, a man playing a woman. It was in the Thisbe half of the role North really shone, speaking all their lines in a warbling falsetto and dying with great aplomb. (A good death scene is always fun.)

After the play it took a while to get out of the school because the actors took a cast photo and then they all had to hug each other and it takes a long time for twenty-four kids to hug each other. (Does figuring out how many hugs that comes to sound like an elementary school math problem?)

We stopped at the grocery store on the way home for ice cream because it was Noah’s birthday. Yes, he did spend the evening of his eighteenth birthday attending his sibling’s play, after a pizza dinner at Mod with me and Beth, while North was at school getting ready for the play. (We also had fettucine alfredo for dinner the night before his birthday and went out for Italian the night after. Noah’s birthdays tend to involve a lot of pizza and/or pasta.)

At home, he opened presents. The big one (a zoom lens for his camera) he’d opened early because he thought he knew what it was and he wanted Beth to use it to take photos at his band concert. But he still had a few to open— a raspberry pi (https://www.raspberrypi.org), a USB controller, a bag of sea salt caramels, two books, and two t-shirts, one from Ithaca and one from Takoma, so he remembers where he’s going and where he came from. It’s a bittersweet moment as he’s balanced between these two places, but I didn’t dwell too much on it, at least not that night. It was late in the evening, after all, and we had cake to eat.