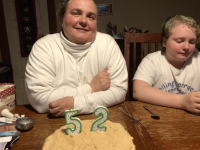 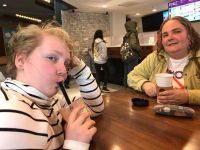 A few days before my birthday something unexpected happened. I got a new job. The week before that Sara had called to let me know that because she lost three major clients all at once she was going to have to take me off retainer temporarily until she could rebuild her client base. She’d still have some work for me, but no guaranteed hours. It wasn’t a good time for our income to dip. We’ve had some unusual one-time expenses recently and soon there will be college tuition. So the next day I put out some feelers with a couple people I know, hoping to find a little stop-gap work.

One of these people was Mike, who used to be North’s basketball coach and is the father of a preschool classmate. He has a business helping non-profits and government agencies interpret their data and make it more accessible. We’d talked about working together several years ago, but at the time he wanted someone to work more hours than I wanted to work. He asked me a to send a resume and some writing samples. On Wednesday, five days after I contacted him, he’d hired me. My first job is to work on report about coastal conditions for the EPA website. I’m editing a chapter on the Great Lakes.

It was a surprise to find work so soon and it was pretty stressful at first because it’s been a really, really long time since I’ve worked for anyone not related to me and that felt intimidating, even though Mike’s a very nice person. Also, office work involves learning a lot more computerized systems than it did in the mid-nineties (when I last worked somewhere other than a two-person family business or academia). It actually surprised me how complicated it seemed to figure out how to navigate an unfamiliar email and calendar system, find shared files, record my hours, etc. I started to wonder if I was too old to learn how to work in a modern environment. A week in, it’s getting better, though I do still have moments of panic and time management is a challenge. As a result of starting during a production rush for this EPA report, I’ve had to delay working on some projects Sara does have for me, which I regret a little. But once I learn how to balance the two jobs, this combination could just the thing, since I was hoping to be working more hours next fall when Noah’s at college. It just came earlier than I anticipated.

So back in the realm of things I did expect, I turned fifty-two on Saturday. That morning I was in the dining room with Beth when North walked in and said, “It’s the fifty two year olds.”

But North had never heard of the B-52s and Beth was engrossed in her phone and not paying attention, so the joke fell flat.

Despite this inauspicious beginning, it was a nice birthday. I spent a lot of time reading the weekend sections of the Post and there was a little street festival going on about fifteen minutes from our house so Beth and I headed down there in the early afternoon and had a lunch of bean and cheese pupusas, plantain chips, and agua fresca. (Mine was cucumber-lime. Beth got mixed fruit.) While we ate it we listened to a band play and watched a juggler. The kids had stayed at home, so it was a little like a date.

That evening we went out to a Thai/Japanese restaurant and then came home for cake and ice cream and presents. The cake was chocolate with peanut butter frosting, which is what I asked for and what Beth delivered. Though I am the family’s main cook, she’s the main birthday cake baker. It was delicious, as always. The frosting was just like the inside of a Reese’s peanut butter egg.

My presents included a new reusable tote with a Japanese print on it (I am always losing them and needing more), a big pot for growing herbs, a gift certificate to the hardware store to get more pots, but not “more pot,” which is what the kids insist I said. They aren’t selling marijuana at ACE, at least not yet. Noah said “they’d totally sell it at the farmers’ market” if it were legal. Before my actual birthday I’d already received a check and some charitable donations in my name (to the Arbor Day Foundation and RAICES) from various relatives. Thanks, everyone!

The next day was Mother’s Day. There were more presents in the morning. Beth got a new phone case and a bottle of raspberry syrup she likes to use in summer drinks. I got gift certificates for Starbucks and Takoma Beverage Company and the promise of a new Guatemalan cloth coin purse.

North wanted to spend part of the day with each of us, so they went grocery shopping with Beth, and then to the pool and the library with me. (These are Beth’s and my normal Sunday errands.) I was glad to get North in the pool so they could exercise their injured leg. We’ve been trying to get them to rely less on the crutches, but they still have pain, so it’s been difficult.

Beth drove us to the pool and then drove home and then drove back to the pool when I called to tell her both North and I had forgotten to pack our bathing suits (well, North had half of theirs). And then when we were finished at the pool and library, she picked us up and took us to Kung Fu Tea, where we had a little Mother’s Day tea, though not the kind with fancy china. (I’ll note here Beth doesn’t even like tea so she abstained.)

Then Beth posted it to Facebook and said, “North has magical powers to get me to do things outside my comfort zone. Nevertheless I am glad to be their mom.” I feel about the same.

It was hard to decide what to do about dinner because Sunday is Beth’s night to cook and that didn’t seem right on Mother’s Day, so we got Italian takeout, but she paid for it and drove to go pick it up and I did the dishes so maybe that wasn’t much better than a normal Sunday when she’d cook and I’d do the dishes. Some aspects of Mother’s Day are tricky when both parents are moms. But it’s easier than when the kids were smaller and needier. Plus, the food was good and the leftovers lasted for a few days of lunches for me and a dinner alternative one night when Noah didn’t care for what I’d cooked.

Monday everyone went back to work and school. That afternoon we received some good news in the mail about Noah’s merit aid at Ithaca. We were expecting a small award for his being a National Merit finalist, but it went up by more than we expected, which was a nice surprise.

Fifty-two is off to an interesting start.