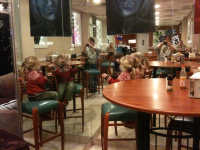 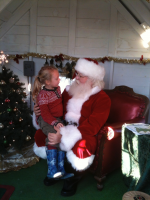 On Saturday morning we were having breakfast at the Galleria Espresso in Rehoboth Beach. There’s a place in the restaurant where two mirrored walls come together. The kids love this corner because if you sit there you can see multiple images of yourself. They call these assemblies of images, “The Noah Club” and “The June Club.” Noah had his turn first and June was impatient for hers, so she ended up with a much longer turn while the rest of us ate our pancakes and crepes. At one point all the members of the June Club were exclaiming over how funny it was that they all looked exactly alike. June’s self-amusing like that.

We were in Rehoboth for our annual Christmas shopping weekend, a family tradition that has multiple benefits: we get away from the distractions of home and chores and focus on our shopping while supporting actual brick and mortar stores and a local economy (if not our own), June gets to visit the one true Santa in his house on the boardwalk, and I get a little much needed off-season beach time to tide me over until spring break.

So I walked on the beach at night and the kids and I built whole villages of sand castles during the cold, windy days. June decorated hers with carefully chosen pebbles and shells and Noah smashed his with the bottom of his bucket as soon as they were built. When they tired of this, they buried treasure (more shells and pebbles) and marked the spot with an X. June cried when Noah buried what she claims were prettier shells than she’ll ever be able to find again and they couldn’t find them, but then she got over it and they were burying treasure again. On Saturday June and I were on the beach at 7:35 with the last pink of the sunrise and both kids and I were there at 4:25 with the first pink of the sunset. We got a good bit of shopping done, too.

The weekend was pleasant, but unremarkable to the point that I don’t have much more to say about it. I think this has a lot to do with June being in the Santa sweet spot. She’s old enough not to be afraid to sit in his lap any more (having conquered that fear last year) and too young to be skeptical and full of angst about it like Noah was in first grade (see 12/10/07). So there wasn’t much Santa-related drama. After breakfast on Saturday June found a mermaid doll at Browse About Books (http://www.browseaboutbooks.com/), fell in love with it and insisted Beth take a picture on her phone in case Santa needed photographic evidence, but he didn’t. That afternoon, she clambered happily into his lap and told him she wanted the “McKenna Mermaid doll” (http://www.amazon.com/Groovy-Girl-122080-MacKenna-Mermaid/dp/B001R59PX0) and he seemed to know what she meant. It was all very satisfactory.

Life is pretty satisfactory for June these days. She loves kindergarten, loves riding the bus, loves the rhythms and routines of school. She looks forward to her turns as line leader and door closer, and keeps careful count of her tiger paws. She’s learning to read and working very hard at it. Because Spanish is more phonetic than English she can sound words out better in Spanish, but she’s more likely to know what they mean in English. I’ve watched her switching back and forth from English to Spanish books and back again as she struggles to find something she can read by herself. She is this close, able to read quite of a lot of words, but not quite fluent enough to sit down and really read a book. The contrast with Noah at this age is striking. He learned to read in kindergarten, too, a little later in the year, but seemingly without effort. One day he couldn’t read and the next day he could. June’s more of a step-by-step learner. That’s why Noah was a sight words reader and she’s a phonics-based reader. Either way, it’s a joy to watch, even if we do have to read a lot of words as she points to them, over and over and asks what they say. Do you know how many words there are out there in the world? There never seem to be quite as many as when you have a child who’s on the verge of reading.

I volunteered in June’s class on Tuesday. When I came in the door her face lit up and for a while she had trouble concentrating on her work because she kept glancing up at me, at the table where I sat date-stamping homework papers and putting them in the kids’ folders and cubbies and folding and stapling coloring sheets into little booklets. Of course that’s why I go, to see her excitement at having me there, and also for the chance to spy on a bit of her school day as I relieve the teacher of some of her clerical duties. Señora T read two books, and gave a short lesson on ordinal numbers (the kids had to line up, five to a line and then the remaining children had to say who was primero, segundo, tercero—first, second, third, etc.) First they did it in order, and then she started mixing it up. There was also a short grammar lesson on the topic of “¿Que es una oración?” (“What is a sentence?”) and a free play period. June was at the stencil table, filling in a sprinkling of stars at the top of her page for a night scene. Other kids drew (one of June’s friends presented her with a drawing of a Christmas tree) or painted, or did puzzles, or played with blocks or toy cars or pretend food in the supermarket area. There was an injury when food went flying and I had to escort a girl to the nurse’s office with a scratch on her nose.

When school let out June asked if we could play on the playground before walking home and she showed me how she can go all the way across the monkey bars now. She’s been working on this all year, devoting many of her recess periods to mastering this particular piece of playground equipment. At the beginning of the year she tried the bigger set (the one she fell off) but she has since switched over to the smaller set, which is more her size, and she can indeed go all the way across. I watched her do it again and again.

It reminded me of something that happened over Thanksgiving weekend. We were at a playground in Wheeling, with Beth’s mom, three of her aunts and two of her cousins. This playground is well known to both kids, but they had a new piece of equipment June had never encountered before. It consisted of four chains, strung on a wooden frame. There were plastic handles on the sides, but June wanted to walk all the way across without falling and without holding on. Over and over she tried, and over and over she fell.

“I am going to keep on doing this until I don’t fall,” she told me, and I thought, oh no, how are we going to leave this playground because I didn’t think she could really do it. Well, you know how this story ends, right? She kept on doing it until she didn’t fall, and then she did it a few more times for good measure.

Five pushing six is a magical age, full of challenges to master, words to read and monkey bar and chain bridges to cross. It’s a good time to be a member of the June Club.