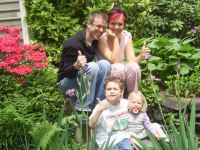 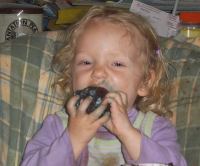 Turning forty-one is anticlimactic. There’s no getting around it. This year it was especially so since we celebrated my birthday (along with Noah’s and my sister’s boyfriend’s and Mother’s Day) the day before my birthday at my mother and stepfather’s house in Pennsylvania. My sister and her beau Dune are visiting from Oregon and due to the convergence of early to mid-May birthdays and Mother’s Day, we decided to have one big celebration. Saturday ended up being more convenient than Sunday since we were planning to drive back home early Sunday afternoon so Noah could attend a birthday party.

The weekend was too short. Everyone knew it would be ahead of time, but we didn’t want to pull Noah out of school and he didn’t want to miss Elias’s party (they’ve been friends since nursery school) so we had a pretty short window of opportunity to see Sara and Dune. This was complicated by the fact that we go to bed and get up really early and they don’t, plus they were on West Coast time and June naps in the middle of the day so there were remarkably few hours when everyone was awake at the same time.

We arrived on Friday evening close to eight and headed straight for the kitchen to admire the beautiful and nearly finished renovation Jim has been working on for over a year. Then we let the kids stay up an hour past their bedtime to socialize a bit with Grandmom, Pop, Auntie Sara and Dune. Noah went to sleep pretty easily but June was so wound up it was another hour before she got to sleep. Then she was up three times during the night and Noah woke up for the day at 5:35, so none of us was what you’d call well rested for the big day. We would pay for this later.

In the morning, Mom and Noah played the Ungame (http://www.boardgames.com/ungame.html), a therapy tool she uses with her clients. It’s a board game in which you discuss different feelings depending on where you land. Noah loves this game. He plays it with her almost every time we visit. During the course of their game I learned that the Penguin Secret Agency dissolved this week, as the members quit one by one. It seems Noah had a very specific vision about how it was to operate and wouldn’t compromise with his fellow agents. He said he didn’t understand why people didn’t want to do what the club was for in the first place. In any case, the last member quit on Friday. Noah seemed not only disappointed about this but also a little mad. He even said Sasha wasn’t his best friend any more.

Sara and Dune got up around eleven. We hung out for a while until it was time for June to have lunch and take her nap. I elected to sleep with her since she was sleeping in a bed that was pretty high off the ground and I was exhausted. Sara wanted to take Noah to an arcade to play Dance Dance Revolution (http://en.wikipedia.org/wiki/Dance_Dance_Revolution). I thought it was going to be just the two of them, but she talked Mom and Beth into going along. Dune was taking his own nap and Jim was working outside so when June woke up she and I were on our own for a couple hours. When Dune woke up we talked politics for a while and June ran around the house insisting she was “the biggest most famous.” She must have been repeating something she heard somewhere but I can’t think what. When Dune asked, “Are you the biggest most famous?” she said, “Yes,” in a matter-of-fact tone.

When everyone returned I learned the plan had changed to miniature golf while they were out and that Noah had a huge meltdown at the seventeenth hole because he noticed the other course had a water hazard and he wished they were playing that one instead. Beth had to pick him to get him off the course and she says he was completely out of control. We can only guess it was frustration about the dissolution of his club coupled with a poor night’s sleep. He’s also got a mouthful of loose teeth, which feel funny and make it hard for him to eat sometimes. After a long talk with Beth and me, he agreed to apologize to Mom and Sara, though he could only bring himself to do it after piling sofa cushions around himself and delivering the words of the apology in scrambled order. (Mom had told him when it’s hard to say something you can start in the beginning, the middle or the end, whatever is easiest.)

Mom and I went out for coffee before coming home and starting dinner, an enchilada casserole that turned out quite well. It took longer than expected to assemble, however, so we decided to open presents while it baked instead of waiting until afterward. Mom, Beth and I had Mother’s Day presents and cards to open. Dune, Noah and I had birthday presents. Even Sara, whose birthday was in March, had a late present from Mom (a set of glasses), which Mom had held onto because they were too fragile to ship. Sara squealed when she saw her glassware—it was just like glasses she’d admired in Italy. Dune laughed with surprise when he opened the spirulina bars we bought him. “I love these! Sara must have told you.” Noah was very excited about his Snap Circuits Jr. kit (http://www.fatbraintoys.com/toy_companies/elenco_electronics_inc/snap_circuits_jr.cfm). I read the long and mushy message in the Mother’s Day card Noah picked out for me aloud. He’d signed it twice, so I’d know it was really from him. (And not from some imposter son? Kids can be mysterious.) Beth and I also had homemade Mother’s Day cards from school. He’d drawn our names in jellyfish tentacles just like the ones he had Beth draw on the goody bags for his party. Meanwhile, June busied herself with the paper and ribbons and didn’t seem to notice that nothing was for her.

Even with the schedule change, by the time we’d eaten dinner and cake and ice cream and gotten the kids ready for bed, it was nine o’clock again. This time, though, both kids dropped off right away and Beth and I got to sleep a little earlier as well. June slept through the night for the first time in a few weeks and Noah woke briefly at 5:40, only to go back to sleep and sleep in until 7:05.

We had a Mother’s Day brunch around ten, without Sara and Dune, who’d been out visiting friends until two in the morning and were still asleep. Noah had no trouble chewing the French toast and ate four slices. Mom finally roused Sara and Dune around eleven thirty, as we were packing to leave. Sara was sad about missing brunch and wished we’d woken her earlier. She sat on our bed, watching us get ready and said she finally realized who June reminded her of—Cindy Lou Who from The Grinch (http://jpbutler.com/images/cindy-lou-who.jpg). She’s the tiny little girl with blonde hair and big blue eyes. Beth said there’s no way the Grinch could have put one over on June like he did with Cindy Lou.

Driving home, we remembered we’d left a couple of June’s sippies in Mom and Jim’s fridge and that we’d also forgotten to take some of the cake with us. I was a little disappointed to think there would be no cake on my real birthday, but we stopped at Starbucks and I put a sizeable dent in the gift card Noah got me for my birthday, buying coffee and juice and pastries for everyone.

We got home in time for Noah to make Elias a birthday card on the computer and for me to plan some dinners for the next week and put ingredients on the shopping list. Beth took June shopping while Noah was at the party and I was left alone. This is my regular time to do housework, but I decided to read a book Beth got me for my birthday (http://en.wikipedia.org/wiki/20th_Century_Ghosts) instead. It felt rather decadent. I’d also told Beth to buy some Brie while she was out shopping. I’ve been trying to cut back on fat a little so this was a luxury, too. It started to rain pretty hard soon after Beth, Noah and June left. I curled up in bed with my book and read a story. When I finished it I felt too tired to keep reading so I decided to rest my eyes a bit and listen to the pelting rain. I woke up forty-five minutes later. I resolved to be a little bit useful and I unpacked everyone’s clothes, unloaded the dishwasher and watered the plants.

I opened my gift from Andrea when everyone came home and we had lentil soup, Brie and apricot jam on flatbread for dinner, followed by cupcakes Beth picked up at the grocery store. She asked me whether I wanted one with blue, pink or orange frosting. Remembering how my sister and I always fought over the pink cupcake whenever Mom bought the Sara Lee variety pack, I chose the pink one. Later that night my sister called to wish me a happy birthday, since she’d forgotten to earlier in the day.

It was a low-key birthday, a bit overshadowed by other celebrations but that’s because we have so much to celebrate in this merry, merry month: having and being a mother, having a wonderful partner to share my mothering, the birth of my eldest child and the man who makes my sister laugh like none of her other boyfriends ever did and Noah’s oldest friend. Plus I had over two hours to myself with minimal responsibilities and I got the pink cupcake. That sure doesn’t happen every day.