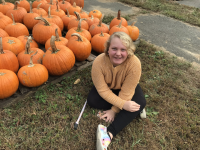 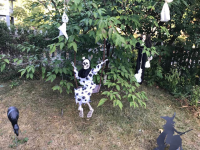 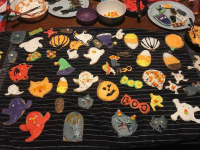 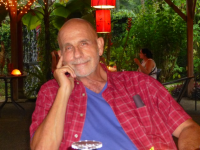 From “Turn, Turn, Turn” by Pete Seeger, adapted from Ecclesiastes 3:1-8

A Time to Reap

When we went camping with Unitarians two weeks ago, North carved a pumpkin with the words Spooky SZN (season). That pumpkin departed in the compost truck a while back, but the spooky season certainly has begun. Our yard is gradually getting creepier, mostly thanks to North’s after school efforts, though I pitched in with the ghosts and Beth set up the giant witch and put batteries in a bunch of things. The clown skeleton on the swing is one of this year’s new additions. In other Halloween preparations, on Saturday morning Beth and North made the dough for Halloween cookies and over the course of the weekend we all rolled them out and baked them and frosted them. I think they came out really well.

Saturday afternoon we all drove out to Northern Virginia to get our jack-o-lantern pumpkins, though we can’t carve them yet or they’ll join their predecessor in the compost before Halloween rolls around. Getting pumpkins at the same farm where we’ve been getting them since before the kids were born felt bittersweet without Noah and it didn’t help that the place seemed to be teeming with little kids, all boys. But we soldiered on. North wore a new orange (maybe more golden) sweater bought specially for the occasion and a single candy corn earring. (The other one is lost). We took the requisite pictures and bought decorative miniature pumpkins, banana bread, an herbal tea mix, cider, apples, two varieties of squash, and sweet potatoes at the farm stand. Afterward we went out for dinner at Sunflower, one of our favorite vegetarian Chinese restaurants, and then to Dessert Story, where Beth and I split a waffle sundae with crushed Oreos and North got mango snow—it’s like fluffy, airy ice cream, with mochi, boba, and little cubes of mango. Then we drove home, listening to our Halloween playlist, singing along to “Monster Mash” and “Psycho Killer” and admiring the almost full moon peeking out of appropriately atmospheric clouds.

A Time to Plant

If you’re a Montgomery County parent with kids in eighth grade or older, you might want to skip the next bit, because you already know all about this surprisingly complex process. To make it as short as I can, there are magnet programs at several high schools you can apply to and if you get in and choose to, you attend that school. There’s a math/science magnet, a communications magnet (Noah’s program), an International Baccalaureate program (both a magnet version and an open enrollment version at different schools), an engineering magnet, a Biomedical magnet, a Visual Arts magnet, a Leadership Training Institute, and more. Some of them are county-wide, some only take applications if you live in a certain part of the county.

If you don’t go the magnet route, you can attend your home high school, but you can also enter a lottery to attend any of the high schools in your consortium—there are five in ours. In fact you have to enter the lottery and rank all five schools even if you want to go to your home school. (I don’t understand this because you are guaranteed a spot in your home school if you rank it first, so I’m not sure why you have to rank all the rest.) And why would you choose a different high school? Each one has several academies, which is kind of like choosing a major, or maybe more like a minor—you take one class a year in your academy, or more if you want.

When Noah was in eighth grade, he was pretty set on going to our home school (which houses the two magnet programs he applied to) either in a magnet or in the general school population, so we didn’t visit many schools. North wants to keep their options open, though, so we’re going to most of the Open Houses. They’re also planning to apply to the Visual Arts magnet and working on a portfolio for that.

First we visited our home school. If North goes there, they would choose the Media, Music, and the Arts academy. This school offers the shortest commute, and more of North’s friends will probably go there than anywhere else because not only is it the closest to us, it’s also the largest public high school in Maryland. We always kind of assumed both kids would go there because it’s a very good school, but North’s not set on it.

The second school we visited is next door (literally) to a vocational-technical school with a culinary arts program that interests North. But you can attend the culinary arts program—a one-year, half-day program—while enrolled in any of the five schools in our consortium and the visit failed to convince us that going to the school next door to the vo-tech would offer any advantage other than convenience in that one year. And that convenience would be outweighed in the other three years by the fact that it’s pretty far away and none of the academies are a big draw, so North’s ruled it out, though they might consider enrolling in the culinary arts program while attending another school.

We have a one-week hiatus before the Open Houses at the other two schools North wants to see—one for its academy of Music, Theatre, and Dance, and another for its Academy of Visual and Performing Arts, so North has some time to work on their art portfolio before the early November deadline.

Speaking of school, it was parent visitation day at North’s current school yesterday, so Beth and I spent the afternoon there. We opted to go in the afternoon rather than the morning because North’s morning classes were gym and Spanish and Beth doesn’t speak Spanish. I would have liked to see art, because it’s a new class for North, and English, because I always like to see English, but North has each class every other day and didn’t have those two on the visitation day. What they did have in the afternoon was geometry and science.

But that morning the school had to shelter in place because there was a fatal shooting in a nearby parking garage and police were looking for the suspect. North got stuck in the field house for four hours because kids who had gym when it started weren’t allowed to walk back to the main building, although other classes were proceeding as scheduled. North ended up missing their Spanish class, but the shelter-in-place ended in time for them to go to lunch. It so happened that fifty-four French exchange students were spending their first day at the school. It must have been a sad and perhaps frightening introduction to American culture for them. North was unfazed.

Anyway, Beth and I had lunch at Busboys and Poets and then arrived to watch North’s geometry class. North really likes their geometry teacher and while math is still not their favorite subject, they’re liking it better than they have in a few years, so I was glad to be able to see her in action. The lesson was about isosceles and equilateral triangles and triangle congruence. The kids were moving through different stations, sometimes listening to the lecture, making their own triangles with colored sticks that snapped together, and answering questions on their laptops. The teacher could see how many people had answered and what their answers were, and she projected some of them on the screen (anonymously) to discuss whether they were right or wrong. When they weren’t in the small group with the teacher, students worked individually on laptops or composition books. The class seemed to run smoothly. There were a lot of Spanish immersion kids North has known since kindergarten so I recognized many of them and that was fun.

Next was science. There were fewer familiar faces here and the teacher did not have very good control over the class. We were expecting this, as North had mentioned it. They’re doing a unit on weather and the lesson was on air masses—polar, tropical, continental, and maritime. There were a couple videos and a worksheet to fill out. The teacher did an experiment in which he put food coloring in hot and cold water in separate mason jars and they compared how quickly it spread (faster in the hot water). Then he balanced the warm water jar face down on top of the cold water jar and they observed how the colors didn’t mix because the hot water stayed on top. This was the part of class during which everyone seemed to be paying attention and not having side conversations. The last twenty minutes was devoted to working on a four-paragraph essay (North’s was on natural disasters but there were other topics) that’s due soon. There was not full participation in essay writing, however. It’s the teacher’s first year and he seems a bit overwhelmed by his charges, even with an aide who was trying to keep the kids in line. This was the last class of the day, so we left with North and Beth drove them to their afterschool acting class.

A Time to Weep

I have some sad news. My uncle David died on Friday from sepsis following a kidney infection. He was my father’s younger brother, seventy-four years old. He was a math professor and once worked as a code breaker for the CIA. In recent years he’d been living in Costa Rica with his wife in a house with a lot of room for their many cats and dogs. Between the two of them they had two daughters and nine grandchildren. He was still teaching math at the Instituto Technológico de Costa Rica.

I didn’t see David a lot, only twice in my adult life actually, but he was a friendly, warm person and I was fond of him. The last time I saw him was at my father’s memorial service nine and a half years ago. He will be greatly missed by his colleagues, friends, and family.