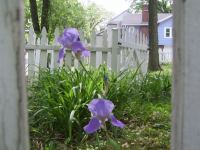 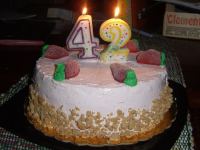 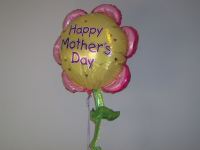 “How old am I?” June wanted to know on Saturday morning.

“No, I’m 13.8 billion!” he said triumphantly. He and Beth had just been discussing the Big Bang and how all matter in the universe has been present since then.

I turned forty-two yesterday. Or maybe it was 13.8 billion. It feels that way sometimes.

We had a busy weekend before my birthday. The annual Garden Party at June’s school was Saturday afternoon and Noah had a play date with Sasha later in the afternoon and Elias’s birthday party Sunday afternoon. And then there was Mother’s Day.

We were invited to a Mom’s Night Out Mother’s Day Eve party thrown by the Stag Beetle’s moms. We almost never accept invitations for social events in the evenings. By the time the kids are in bed I am usually ready to collapse myself. Recently, though, I’ve found myself staying up a little later, most nights until ten or even beyond. I’m not sure if I’m better rested or just more in need of me-time, but I suspect it’s the latter. So anyway, after going back and forth in my mind about whether or not to go to the party by the time I finally decided to go for it I’d waited too long to find a sitter. I only had time to contact one (Elias’s older sister) and she wasn’t free. So we stayed home.

Possibly it was just as well because we were running around a lot as it was. Noah surprised us by coming home from school on Friday without Mother’s Day gifts for us. He has brought gifts home from school or daycare every year since he was two so we had no backup plan. (What’s up, Montgomery County Public Schools?) Add two Mother’s Day gifts to my birthday present and Elias’s birthday present and that’s a lot of shopping for one indecisive and easily distracted eight year old to accomplish in one weekend.

With only one gift to facilitate, I got off relatively easy. I took both kids to the Safeway on Saturday morning. June knew what she wanted to buy as soon as we crossed the threshold of the store. “Yellow flower balloon!” she began chanting. I wasn’t even planning on getting Beth something from June, because she’d brought home a very nice card with a water color on the front she made at school and the words “They play hide and seek with me. They climb trees with me” printed on rice paper inside. (This was a quote from June, but more a reflection of wishful thinking than reality, at least when it comes to tree-climbing.) Plus June had colored a Mother’s Day page we printed from the Ladybug website (http://www.ladybugmagkids.com) so I thought she was covered. She did not see it that way, however. “Yellow flower balloon!” she cried, becoming more insistent. I grabbed the balloon from the display and guided Noah over to the gift cards. After much deliberation, he selected a Starbucks card. It would have been a better present for me, since I’m the Starbucks fiend in the family, so I tried to steer him to Cold Stone (Beth loves ice cream) or iTunes, but he stuck to his decision. It wasn’t ideal but it wasn’t a completely inappropriate gift either, as I would come to appreciate later in the weekend.

Shortly after we returned, Beth left for yoga. The kids and I had lunch, then June and I napped while Noah did homework. Beth came back and picked him up to take him shopping again while June and I were still sequestered in the bedroom. I didn’t find out the details of this trip until later, but when they met us at the Garden Party, quite a bit later than expected, Beth seemed frazzled. She also reported that they didn’t have a gift for Elias yet so they would have to go out again the next day.

Meanwhile, June and I socialized and played on the Purple School playground and admired the children’s artwork hanging on the fence. June presented Andrea with a finger painting she’d made. I’d taped a paper onto the back that said:

Steph: What do you like about Andrea?
June: She paints with me.

It was for Teacher Appreciation Week, which had ended the day before, but Andrea was gracious and enthusiastic about the belated tribute.

Beth and Noah made a brief appearance at the party, long enough to say hello to a few people, enjoy some snacks and ooh and ahh over June’s collage of spring grass. Then we all piled into the car and took Noah to Sasha’s.

On Sunday morning, the Mother’s Day gifts came out. June had let the cat out of the bag regarding the balloon the day before, but Beth acted surprised anyway when Noah pulled it out of my closet. Beth had asked me the day before if it was okay if my gift from Noah was “not a very good gift.” Sure, I said, giving gifts is a learned skill; he’s still getting the hang of it, etc. Still, I was surprised and I will admit a little dismayed when he presented me with a pile of papers, crookedly stapled together with a cover sheet that said, “1,000 Page Book Report.” Noah himself has to read books totaling one thousand pages in the last six weeks of the school year and fill out a sheet about each one he reads. He replicated the assignment for me. Noah likes to do this, make homework for us and it’s usually based on his own homework. Generally, we play along, but nonetheless, one does not expect a homework assignment for a Mother’s Day present. For all my selfless sentiments about learning to give gifts, I secretly hoped he’d do better for my birthday the following day.

We went through our normal Sunday routines with the addition of more gift shopping and Elias’s party. The party was at a duckpin bowling (http://en.wikipedia.org/wiki/Duckpin_bowling) alley and it was a bit of a hike from Takoma, so Beth decided to stay in the general vicinity and hang out in Starbucks and use her gift card there. I don’t know why but I imagined her reading or otherwise enjoying herself there. This made it easier to accept that I’d have to miss my Sunday afternoon swim at Piney Branch Pool (http://www.takoma.com/parenting/2009/01/piney-branch-pool-lives-again.html). This is a new tradition I’ve had some trouble getting established. In fact I’ve only done it once, the weekend after Easter. Since then we’ve had other priorities most Sunday afternoons. The one other time I tried to go, I forgot my wallet with the $3.50 I’d need to get in and by the time I got home it was too late to set out again. So, when Beth brought Noah home and I saw her carrying her laptop out of the car I was disappointed. Not only did I miss my swim, but Beth had been working while I was not swimming.

I feel like we haven’t really gotten the hang of Mother’s Day despite eight years of practice. The first one we didn’t expect to celebrate as mothers because Noah arrived three weeks before his late May due date. We were so overwhelmed with new motherhood we agreed to just let the day go uncelebrated. There have been years when we went out for a meal or arranged to each give the other a scheduled break, time to read or leave the house unaccompanied or take an uninterrupted bath, but other years we just seem too busy to work it in. This year was like that. While my Facebook friends were posting upbeat Mother’s Day messages I posted a cranky one about how lesbian moms and straight single moms should be issued a “Dad for the Day” to co-ordinate a day of rest for them.

The next day was my birthday. We’d agreed to do presents in the evening, but Noah gave me a homemade card in the morning. It read: “Happy 42nd Birthday! You’re 42!! Whooooo! You’re 42! Dooooo! You’re 42! 42 is Awesome.” You can’t complain that the boy lacks enthusiasm.

June and I passed a pretty normal Monday. We watched Sesame Street. I did a couple loads of laundry and as we are experimenting with potty training this week, I spent much of the day encouraging June to sit on the potty, stripping off her wet training pants and saying, “It’s okay to have accidents. Everybody has accidents when they are learning to use to the potty” over and over and over.

Here are some presents I didn’t get: June peeing on the potty even once. Noah finishing his homework in a timely fashion so we’d all be ready to go out to dinner when Beth got home.

Here are some presents I did get: Two flowers on the iris that has not bloomed in several years and took me by surprise by putting out buds on Saturday. Beth coming home an hour early, as promised. A nice dinner at Macaroni Grill (http://www.macaronigrill.com/Home/Default.aspx). The exact red velvet strawberry ice cream cake I wanted. Some really fun looking books: (http://en.wikipedia.org/wiki/Jonathan_Strange_&_Mr_Norrell) and (http://vaultofevil.wordpress.com/2008/06/03/peter-haining-mammoth-book-of-haunted-house-stories). Socks. Tea. An Umbrella. A Beach Mat with a pillow attached. A gift card from Borders. Some of these things I asked for; some were surprises. Here was the most surprising one: A card from Beth that read: “The bearer of this card is entitled to one DAY OFF of her choosing.” I felt a bit churlish for complaining to the  Internet about my Mother’s Day and for my unexpressed grumpiness about Noah’s first gift. He got me the haunted house book “to read on your day off!” and he seemed genuinely excited about it. (Beth later told me she’d put quite a lot of effort into getting him to select a fitting book and that his original plan was more homework. So, thanks, Beth!)

I have the day off all planned out. Tuesday of next week I will leave the house shortly after breakfast, get a coffee (exactly where depends on the weather) and spend the morning reading (at Savory if it’s raining, somewhere outside if it’s sunny). I’ll return to the house for lunch and a nap, then leave again and go swimming, then return for dinner. This extended break was the most unexpected gift of our back-to-back mid-May celebrations and most definitely the best.