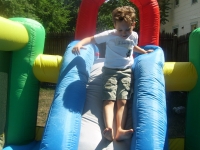 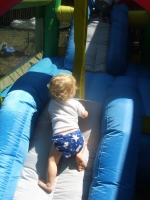 “Welcome to 6:47,” Noah chirped. He was standing by our bed in his T-Rex pajamas, waiting for a greeting from me.

About a week and a half ago we changed the time Noah is allowed to come into our room from 6:00 to 6:30 a.m. He accepted the change without fuss, possibly because we promised to play with him right away and not insist he try to lay quietly in the bed and avoid waking June, while we tried to drowse a bit longer ourselves. Or it could be because we bought him a digital clock for his room and he loves being able to announce the time.

The old 6:00 system was implemented when Noah was not quite three and new to sleeping the whole night alone. He would sometimes fall back asleep for a half hour or longer if we let him in the bed at 6:00 a.m. Those days are long gone. Now he’s wide awake long before any of his sleepy womenfolk have any desire to be. We were starting the day more and more often ignoring him, or scolding him, or engaging in some kind of conflict.

Our mornings are much better now. He’s holding up his end of the bargain (except for one morning when he came in at 4:48, having only checked the last two digits of the time) and so are we. Plus I like his new morning greeting, “Welcome to 6:32” or “Bienvenidos a 6:30” or some variation. It’s a good reminder to Be Here Now, as the Buddhists say, or to live in the moment as my mother recently advised me. And today we got a bonus, a full seventeen extra minutes of rest.

Noah wedged himself into the bed, between me and June, snuggling up close to me. Soon after June started to stir; then she woke, crying, and climbed over Noah to rest on my chest. First thing in the morning they both want, no, need to touch me. June falls asleep in Beth’s arms most nights after she’s had her fill of nursing and she sleeps nestled against her most of the night. When she wakes, at night or in the morning, however, she wants me. The trick is finding a way to arrange myself and both kids so they’re not fighting over Mommy-access. (Actually, this seems to be a lot of what parenting two is all about.) We also need to keep the snuggle session long enough to satisfy Noah and short enough to minimize sibling conflicts and excessive rough housing in the rather crowded bed. It’s a balancing act.

This morning it lasted twenty minutes. We lay together quietly for a while. Noah and June rolled together and shrieked. We barked like dogs. (June is really good at this.) We pretended to be horses. Finally, it was time for story and game. This is a Beth-and-Noah ritual. They leave the bed for Noah’s room where she reads him a story (right now they are working through a souvenir coffee table book about Disneyland) and then they play a game. This morning Noah wanted to play museum, a game during which he pretends to be a museum guide showing Beth the exhibits in a science museum. The water cycle, the food chain, and evolution are his favorites. Beth prefers Meteorological Moment because it’s shorter. In this game she pretends to be a radio announcer who relays a brief set of facts about weather she reads from one of Noah’s weather books. (If you listen to NPR, think Star Date, but about weather instead of space.) She couldn’t talk him into it, though, and soon the museum guide was telling her about the films that could be viewed at the museum.

After Noah ate breakfast, brushed his teeth and got dressed, it was time to bounce. Along with the hopping ball, we bought Noah his own personal bouncy castle for vestibular stimulation, deep pressure on his joints, oh, and fun, too. He loves it. We’ll see if it helps organize and focus him the way the occupational therapist says it will, but in the meantime he’s using it several times a day. When possible, we try for a bouncing session before Beth takes him to camp.

It’s the fourth week of Noah’s summer break and the second week of camp. Last week’s camp was art and dance at his old nursery school. It turned out to be more art than dance. This week is music and math through the Takoma Park Recreation Department and it’s turning out to be more music than math. Both camps have been for four to six-year-olds and in both Noah has been the oldest camper. He doesn’t seem to mind playing with younger kids or that the activities have been slightly different than we expected. He seems quite happy in fact.

When I picked him up today a cd was playing and the children were dancing. The drums they’d painted earlier in the day were drying on the project table. Noah had the chance to pick the final activity and he had the teacher and one other child dance a dance of his own invention, called The Acrobatic Sky Show. (This dance and an accompanying chant grew out of a rather wild play date he had a couple weeks ago. There’s even a logo, but that’s another story.) The teacher asked him to bring a favorite instrument and cd the next day. After some discussion, we settled on his accordion and a cd of international music.

At home we had a pleasant afternoon. For lunch we ate cherries so juicy that both the children looked like vampires (and sloppy ones at that) when they were finished. June napped long enough for me to read an entire issue of Big Back Yard (a science magazine for children) to Noah. I tried to get him to alternate reading paragraphs with me (this is how we read the last issue) but he wasn’t in the mood. We watched Maya and Miguel and Curious George. We went to the creek to look for round and oval rocks to paint like beetles (a craft project from the magazine) and he gave the rocks their first coat of paint. I made a vegetable-orzo salad and while it chilled I read two chapters of Pippi in the South Seas to Noah, soaking my feet in the wading pool as June skinny-dipped in it. After dinner, Beth set up the bouncy castle again and the kids took turns bouncing. Before bed, we feasted on homemade sour cherry sauce over vanilla ice cream. (Beth made the sauce last weekend and we have been eating it every night since.)

As I left Noah’s room after putting him to bed, I glanced back at him with a small smile. “Welcome to 8:21,” I said. He giggled. I wasn’t wholly in the moment, though. My mind was casting ahead into the next forty-five minutes or so. I needed to get June to bed, treat cherry stains in both kids’ clothes, talk to Beth about our upcoming conference call with the occupational therapist the next morning, etc., etc.. Before I knew it, Noah was out of his room. The sippy of water he keeps in his bed at night was missing. I located and refilled it and returned it to his room. “Welcome to 8:26,” I said as I left the second time. And this time, the two-child portion of my day was over.

It was a good day, the way I hoped our summer days would be. They don’t always go so well. Sometimes June won’t nap alone and I have no alone time with Noah. Sometimes he’s whiny and June cries and cries and cries and there seems to be no way to make them both happy so I have to choose one, or sometimes neither if that’s what it takes to get dinner on the table. Sometimes I get angry at Beth as 6:00, then 6:30, then 6:45, then 7:00 pass by and she’s not home yet. Sometimes we run after the ice cream truck and we don’t catch it. Some days are more like I feared when ten weeks stretched out in front of me, seeming like a very long time indeed.

Either way, good, bad or in between, the days are now. With varying success, I try to be open to them and to welcome now.