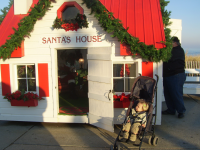 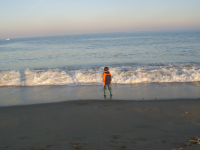 We told Noah the truth about Santa Claus yesterday. You may wonder why we did this a mere sixteen days before Christmas. We didn’t want to, but he’d been struggling with his belief for weeks, turning it over and over again in his mind, and the longer it went on the less it felt like we were pretending and the more it felt like we were lying to him.

When Noah was a baby we weren’t even sure if we’d do Santa for this very reason. We wanted to be as honest with him as possible, but in the end tradition won out. Noah has always loved stories and pretending and magic, so it felt perfectly natural when we first starting talking about Santa the year he was two and a half. Earlier this year he asked why we celebrate Christmas if we are not Christians. It was a logical enough question. We told him it was because our families were Christian and the traditions were still special to us. He accepted that, but wondered why Santa visited us and not some other families who don’t believe “Jesus was a god.”

On Thursday night, Noah and I were snuggling in his bed and talking about our upcoming weekend trip to Rehoboth. We were going in order to Christmas shop away from the chores and distractions of a weekend at home and for me to get an off-season ocean fix, but for Noah there was one main attraction. He reported that some of the kids in his class thought it was strange we were going to the beach in December.

“I said Santa will be there,” he answered simply.

Santa has a little house on the boardwalk where he visits with kids every weekend from Thanksgiving until Christmas. It’s scenic, the lines are short and you can take your own pictures for free. It beats the mall hands down.

“Last year I told him I wanted a microscope and he gave me a case that had not just a microscope but a magnifying glass and knives, too. Cool, huh?” (The scalpels are for dissecting specimens to put under the microscope. He’s not allowed to use them yet.) In his excitement, he seemed to have completely forgotten that he’d declared, “I think Santa is a fake” in the car on the way home from Thanksgiving weekend. Of course, that declaration was followed by a long soliloquy about how no scientists have ever found Santa or flying reindeer at the North Pole, but how not finding them doesn’t necessarily prove Santa’s not real, and how he did get the microscope he asked for, etc, etc. And it went on this way, on and off, for the next two weeks.

Every now and then during one of these monologues he’d ask, “What do you think?” in a casual, conversational way, as if he was consulting an equal for an opinion, not seeking a definitive answer from an authority. When I asked him where he thought the presents came from, if not from Santa, he ignored the question. I was testing him, seeing how close to the truth he’d already come. We decided he wasn’t quite ready, so we waffled and stalled, hoping we could make it until Christmas. We’d tell him then, Beth and I agreed. Meanwhile, Noah was making plans to stay up all night and watch for him at my mom’s fireplace on Christmas Eve.

We arrived at Rehoboth a little after seven on Friday evening. June had slept in the car and wasn’t sleepy at bedtime so after Noah was asleep I left Beth and June in the hotel room and went for a walk on the boardwalk. I walked down to Santa’s house, admiring the lights on the boardwalk, and stepping carefully through the slush on the wet boards. I checked the sign for his hours. Santa would be there starting at three on Saturday afternoon.

The next morning, Beth teased Noah, asking if he wanted to see Santa that afternoon or wait until Sunday. He was incredulous. “Today, of course!” he said. But then he told us he was going to whisper what he wanted into Santa’s ear, “so you can’t hear.” Bad sign, I thought. Now he’s testing Santa.

We spent the morning playing on the beach, hanging out in the hotel lounge and watching the fire while Noah worked on the rough draft of his oral report on Germany, and doing some shopping. Then we went to lunch and returned to the hotel for June’s nap. We were at Santa’s house almost at three on the dot. Santa was outside, posing for pictures. When he went inside, Noah was the first child to enter. Santa asked him his name, commented that he’d always like the name Noah, and asked how old he was. Then it was time to get down to business. “What do you want for Christmas?” he asked. Noah leaned in and whispered. Then Santa diplomatically promised to bring him something he’d like and gave him a necklace with a flashing red Christmas ornament dangling from it.

Noah seemed happy and satisfied with his visit to Santa. But as soon as we left the little house, he asked if it was possible that the person he’d seen was just someone in costume pretending to be Santa. We allowed that this might be the case. Beth pointed out that Santa couldn’t be everywhere at once so maybe he needed some helpers to visit with children and find out what they wanted. Probably, they would send an email to Santa with the requests. “But he just asked my name. Why didn’t he ask my address?” Noah was suddenly alarmed at the possibility that his information would be incompletely conveyed to Santa.

I took the kids to the beach while Beth did some more shopping. Noah got too close to the waves while I was watching June and his boots filled with icy seawater. I found him sitting on the sand pouring it out. I winced a little to see him running around with only a pair of drenched cotton socks on his feet, but he didn’t seem to mind and we’d promised to meet Beth on the beach so I was afraid if we went back to the hotel room she wouldn’t know where we’d gone. It was actually his hands that got unbearably cold from piling wet sand into piles to make castles. They started to smart and he cried until I warmed them between mine. We put his boots back on and walked down the boardwalk hand in hand, looking at the lights. I held both of Noah’s hands in one of mine and one of June’s in the other. “Mommy, you have five hands!” Noah exclaimed with delight. When Beth came back, I suggested we take him back to the motel and get him into a warm bath instead of going straight to dinner as planned. Once he was warm and dry, Noah was disinclined to leave the hotel room, so we ordered pizza to the room and watched The Polar Express on television. Despite the film’s strangely menacing atmosphere (a complete contrast with the book), I still got a little choked up at the end when the skeptical little boy protagonist explains he is now an old man, but the magic sleigh bell still rings for him as it does “for all who truly believe.”

The next day as we lunched on sandwiches, fruit salad, smoothies and tea at a cozy little bistro, Noah launched into another Santa discussion. “Maybe you bought the presents,” he said. Beth glanced at me questioningly. I nodded.

“You’re right, Noah,” she said, placing her hand over his.

“What?” he seemed distracted, as if he wasn’t sure what she was talking about.

“You’re right. We did buy the presents. Santa is just a story we tell, for fun.”

I reiterated what she’d just said, since he still seemed not to have heard. Then he said, “Oh,” in an understated way and changed the subject.

On the drive home we stopped at gas station. As June and I waited outside the restroom door, a man approached. “Are you ready for ho ho ho?” he asked her. As usual when she’s addressed by a stranger, she looked slightly alarmed and started to back away. Not reading her body language, he came closer. “Is Santa going to come visit you?” he asked.

“She’s shy around strangers,” I said, holding out a hand for her to take. I was annoyed with him for getting in June’s space and for making assumptions about what holidays we celebrate, but still, part of me was comforted by the thought of having a few more years of ho ho ho. We are sentimental and inconsistent atheists, clinging to the traditions of our youth, not able to let go of the symbols, even after we let go of the substance behind them.

At home last night, as we lay in bed, talking about the weekend, Noah said, “I wonder if I’ll get what I asked for.”

“Yeah,” he said. “Because Beth says Santa’s not real.” He said this as if Beth might not the final authority on the question and as if I had not spoken at all.

When he got off the bus this afternoon, Noah asked me, “Do you think Santa has glasses?” I was taken aback and didn’t answer at once. Did he still believe or not? “I’m just asking your opinion, Mommy,” he said impatiently. “Because Santa’s not real.”

“Do you mean how do I imagine him?”

“I guess I don’t usually think of him with glasses.”

“The one I saw had glasses,” he commented.

Then he asked me if we could play a game that takes place on another planet “where Santa is real.” The game involved riding on Santa’s magic flying surfboard back and forth between the planet and its six moons. Noah and I stood on his sled in the damp grass of our backyard, knees bent, arms outstretched, flying back to where Santa is real.