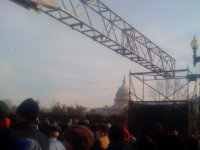 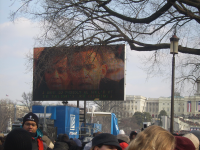 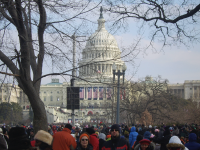 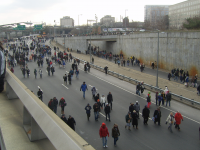 The tickets! I was going through my mental Inauguration Day checklist as Noah and I were waiting for the bus. Noah and I had gotten out of the door by 7, a good start. But I’d left the tickets inside. I made a quick dash into the house to retrieve them. Almost leaving the tickets behind actually came as a relief to me. I have a superstitious belief that if you’re leaving on a journey and have nearly forgotten something major but remember in the nick of time it means you haven’t forgotten anything else.

After a short wait, we caught our bus to the Metro. Takoma Station was busy, but not over-crowded. As we waited on the platform, three trains came and went, all too packed to board. The next train seemed like it might have room for two more to squeeze in, so squeeze we did. The car was filled with teenagers from Arizona, in town with their history teacher for the big event. The whole car was filled with excitement and energy. As we lurched our way down the tracks, one of the passengers who had been on his way to work decided to call in sick so that he could participate in the festivities. The history teacher from Arizona took charge, explaining the situation and asking all of us to be silent while he made his call. Miraculously, everyone did quiet down, then erupted in whoops and cheers after he finished.

We got off the train a stop earlier than planned, at Union Station, because Noah was starting to get antsy from being squeezed in so tight. As we left the station we found several streets blocked off for vendors selling anything and everything, all adorned with the name or face of the new President. I promised Noah we’d return later so that he could shop, and hurried him along. It was about 8 by this time, we were still making good progress, but I didn’t know what lay ahead.

I couldn’t believe the crowds of people on the streets near my office – streets that are usually nearly empty. The crowds began to thicken as we headed toward the 3rd Street tunnel. Normally a high-speed funnel for crazed commuters headed toward I-295/I-395, the tunnel had been closed for the day to provide a route for pedestrians to travel from one side of the mall to the other. It was fun to take over this space usually reserved for cars. We emerged on the other side, and crowded onto 3rd St., SW. Time check: 9:20. Not bad. I could see the gate for Silver Ticket holders about a block away. Surely we’d be through security and onto the mall in an hour or so.

I broke out the hand and toe warmers I had purchased the day before and stuffed them into Noah’s crocs and his gloves. We continued to shuffle slowly forward. Occasionally we’d come to a halt as officers stopped us to clear Independence Avenue for official vehicles. By 10:00 we had made it across Independence. Then…nothing. The crowd just stopped. After about 15 minutes rumors made it to us that people without tickets had “broken through” and taken over the Silver area. But there was no-one official around to confirm this. Some turned to leave, planning to make their way further West to at least have a chance to get into a non-ticketed area of the Mall.

Noah began to complain. He was cold. I was cold. Both of us we getting buffeted by the confused crowd, some still trying to push forward, some trying to leave, some joining hands and slicing horizontally through the throng. I was starting to doubt the wisdom of even attempting this. Maybe we should have stayed home to watch on TV with Steph and June. Thank goodness June wasn’t here – she would have been crushed! Why weren’t there any police around with bullhorns to explain what was going on and what to expect? Time was ticking away. The sea of people was gradually inching toward the mall, filling in the spaces of those who had left. I could glimpse the Capitol thorough the trees.

Suddenly, at 11:20, the crowd rushed forward. (For a view of the crowd just before the breakthrough, see http://specials.washingtonpost.com/inauguration/satellite/.) I could see the nearly empty security gates. Noah and I dashed for a line and after a few short minutes were were there. On the Mall. Our view of the jumbotron was somewhat obscured by the trees and the sound wasn’t the best, but we could see the Capitol in the distance and feel the energy of the crowd.

Noah had forgotten about being cold and tired of being pushed around. He danced. He cheered when the crowed cheered for Carter and Clinton. He chanted Obama’s name. He looked at me when the crowd began to boo Bush. I shook my head no. It just didn’t seem right to boo. Partly it didn’t seem in the spirit of the day. But it also seemed to reduce Bush to a comic-book villain, divorced from the reality of what his decisions have meant for millions of people across the globe. The program began. Some in the crowd around us waved rainbow flags as Rick Warren spoke. We cheered for Aretha and her fabulous hat and for Joe Biden after he took his oath.

Then it was time. I hadn’t been able hold Noah up so he could get a better view for the whole thing; he weighs nearly 60 pounds now. But, as tears ran down my face, I lifted him up to see Barack Obama take the oath of office and become the 44th President of the United States

Want to feel like you were there? Check out this awesome Gigapan photo: http://gigapan.org/viewGigapanFullscreen.php?auth=033ef14483ee899496648c2b4b06233c . The resolution is so amazing that you can zoom in to see Yo-Yo Ma using his iPhone.