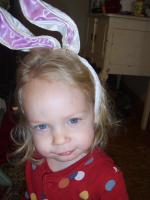 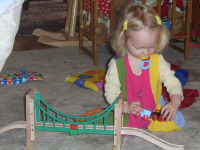 Thursday evening I made Noah’s favorite dinner—pancakes—to celebrate the beginning of his spring break. As I mixed the ingredients, Noah sat at the dining room table doing word puzzles in the latest issue of Ranger Rick. In between urging me to comfort a doll who was “very scared,” June was running in and out of the kitchen singing, “Who’s dat girl? Runnin’ around wif you?” in her best Annie Lennox imitation. Just around the time I reached the tricky part of the operation, spooning the batter onto the griddle and making sure none of the pancakes burned while I was distracted by something else, they both wanted my attention at once.

Noah had tired of his magazine and said, “What should I do?”

June wanted to know if I could “play train tracks?”

“Maybe Noah can play train tracks with you,” I suggested. I only gave this idea about a 25% chance of succeeding, but you have to try. Much to my surprise, Noah took June’s hand and they walked into the living room. He repaired a track I had built earlier in the day and they took turns running the trains over it, looking startlingly like two full-fledged kids playing together.

Who’s that girl, I wondered, playing with my son?

Beth had Good Friday off work, which was a good thing because I had an editing job due that day and Easter and June’s birthday were both today, so we had a lot to do. Over the course of Friday, Saturday and this morning we cleaned the house, wrapped presents and dyed Easter eggs. Beth went grocery shopping, made June’s cake and assembled her slide (her present from Andrea and John). Yesterday morning I took June on some errands to get her out of the house so Beth could clean. We stopped by the video store and I picked up a couple of DVDs for her.

When Noah was a toddler we followed the American Academy of Pediatrics recommendation of no television for children under the age of two (http://www.pbs.org/parents/childrenandmedia/article-faq.html#prevalentTV). In fact, we went it one better. He didn’t really start to watch television until he was almost two and a half, when I realized if I let him watch Sesame Street once or twice a week I could get a little class prep or grading done during my at-home weekdays with him. We haven’t done as well with June. Noah watches PBS for an hour most weekday afternoons, plus a half-hour of so of DVDs in the evenings at least few nights a week, and June will usually watch what he’s watching. I could have taken her out of the room, but the temptation to get some research done or to get a jump on dinner, or to relax and watch television myself was just too great. Anyway, June being two means I feel a little less guilty about it now, so I was celebrating by getting something for her to watch, chosen expressly for her. We’d never done this before. We ended up with a Maisy DVD and a one of Maurice Sendak stories. June’s a big fan of all things Maisy and she loves Where the Wild Things Are and the whole Nutshell Library and the Sendak DVD has all of those stories. June didn’t really know what we were doing at the video store, but she was excited to see the slide in the children’s area and she insisted on getting out of the stroller to go down it.

Last night, Noah hid the Easter baskets (thoughtfully provided and beautifully assembled this year by my sister Sara). Since this is his first year not believing in the Bunny, Noah wanted a role in the hunt. This morning I led a clueless June to the baskets hidden in Beth’s bedroom closet and the kids dove into them, exclaiming over the candy, bubble bath, bunny ears and stuffed bunnies. “My own rabbit!” June declared in delight, as if she did not have at least a half dozen stuffed bunnies already. Before breakfast, we fed June a peanut butter egg. Like television, peanut butter is not recommended for the under two set; and as with television, it’s a bit harder to follow the guidelines with an older kid in the house leaving unfinished peanut butter cereal and peanut butter and jelly sandwiches in reach. Let’s just say it wasn’t her first taste of peanut butter, but it was her first authorized taste.

After that it was time to get ready for the descent of the grandparents. My mother and stepfather were coming for June’s party at 1:30. It was hard to know how much of the day’s preparations June understood, but on one point she was very clear. When Beth told her she could pick out balloons at the grocery store and was starting to tell her why, she interrupted, “B’oons for my birfday!” They returned from the grocery store with a butterfly-shaped balloon and one with the Sesame St. characters eating birthday cake, which June called the “monster b’oon.”

June ate lunch and napped. She woke after about an hour. Usually if she sleeps less than an hour and a half and seems cranky (and these things generally go together), I try to put her back to sleep, but my mom and stepfather were due soon, so I kept her up by reading Dr. Seuss’s Happy Birthday to You to her, over her confused and sleepy protests:

I thought how close June came to being a WASN’T. It took Beth and me a long time to decide whether or not to have a second child and then it took about me almost a year to get pregnant. I hadn’t really decided, but I was considering calling it quits if I didn’t get pregnant during the cycle in which she was conceived.

If you’d never been born, then you might be an ISN’T!
An Isn’t has no fun at all. No he disn’t.
He never has birthdays, and that isn’t pleasant.
You have to be born, or you don’t get a present.

Well, she was born and presents she got. After Mom and Jim arrived, we settled in to open the mounds of gifts. I didn’t think we’d gotten her all that much, but somehow once Noah piled up the packages on the living room floor, it did look like a lot. June picked out gifts one by one and brought them to me to open. The first gift was a set of training pants in red, green and blue. When I told her they were special underpants for when she used the potty and didn’t wear diapers, she gave me a deeply skeptical look. We continued to open gifts. There were clothes, and books and art supplies, but the big hit was the suspension bridge for the railroad tracks that Noah picked out for her. Once that was open it was hard to get her to pay attention to yet another dress or t-shirt, though she did want me to read each book after it was unwrapped. At last we took her to the back yard where her new slide awaited. “I want to slide!” she exclaimed, and she did just that, over and over. Only the promise of cake lured her back inside.

For the record, I need to say that the fresh strawberry frosting Beth made for the cake is the most delicious frosting ever in the entire history of frosting. Here’s the recipe (http://www.wholefoodsmarket.com/recipes/dessert/cake_strawberry.html). Try it yourself.

After Mom and Jim had left, Beth retreated to our room to rest a little. I followed and crawled into bed next to her. “How long do you think we can lie here before they find us?” I asked.

“Not long,” Beth answered, hearing the sound of June’s footsteps in the hall.

Happy Birthday, dear June Bug. I am so glad you are you.