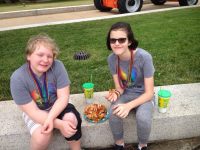 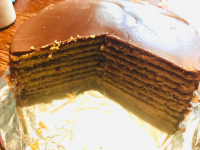 Noah and YaYa left for Wheeling the day after he graduated, after a farewell breakfast at Panera. That evening Beth, North, and I watched a supernatural teen romance (Every Day) because North had wanted to see it and Noah wasn’t interested. I also made chocolate pudding with them, took them swimming, and to Pride with Zoë, so it was a pretty jam-packed weekend. Beth had to work the weekend of Pride, so it was just me and the kids. It’s been thirty years since Beth and I attended our first Pride festival in Cleveland and it felt a little strange to be there without Beth and with a couple of thirteen year olds, more like chaperoning a field trip than anything.

North went to school the next week. A lot of it was the usual end-of-year movies and parties, but they did have an algebra test as late as Wednesday. North recently had this to say about the past school year: “I hated it, I’m glad it’s over, and I will miss almost nothing about it.” Still, I hope it wasn’t all bad. They were in two plays, sang with the county honors chorus, performed a solo concert, won an honorable mention on the National Spanish Exam, and fulfilled a long-standing wish to visit a foreign country. I kind of get what they meant, though– early adolescence can be rough.

When seventh grade was finally over, North and Beth left for a weekend camping trip in Southern Maryland, where they burned all North’s school papers over a campfire and visited Smith Island. They brought home a Smith Island cake, which in case you didn’t know, is the state dessert of Maryland.

Often when Beth takes one or both of the kids camping I have an ambitious agenda or house and/or yard work, but I’ve had very little work from either Sara or Mike the past couple weeks and I’ve been doing a lot of house and yard work already. And though I haven’t even put a dent in everything that could be done, I decided I’d take it easy. The campers were gone from Friday afternoon to Sunday morning and in that time I read most of a thick Shirley Jackson biography that had been sitting on my bedside table for two or three years, took myself out to dinner at Kin-Da because I was in the mood for vegetable tempura, and went shopping at the farmers’ market.

Monday was the first weekday of North’s summer break and they were out of the door before 9:30, off to Zoë’s house where they’d spend the day and night and part of the next day. They only came home at two on Tuesday because I wanted them to clean the bathroom before we left for their trans kids’ support group. Today they were out the door just before 9:30 again. The reason for all this North-and-Zoë togetherness was that this was one of the only weeks (or maybe the only week) neither of them has camp this summer, so they wanted to squeeze in all the time they could.

North came home at four, so they could eat an early dinner before heading off to the first rehearsal for Sweeney Todd. Highwood Theatre has moved to a new (and less convenient) location, so I accompanied them on the bus to make sure they knew the route. Tomorrow North’s got a physical therapy appointment in the morning and another Sweeney Todd rehearsal in the evening. In between, Noah and YaYa will join us and the day after that we’re all driving to the beach. I’m pleased by the timing–we’re arriving at the beach on the summer solstice–but in some ways it feels like summer’s already in full swing.