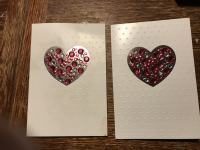 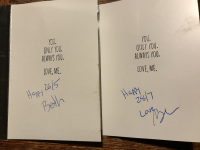 Noah’s still home and as a result, we’ve been trying to watch all the things with him, in different combinations. We all went to see Little Women last weekend (four thumbs up), and he and I went to see Parasite a few days ago (thought-provoking and recommended if you’ve got the stomach for some violence—the end is a bit of a bloodbath). On the small screen, the four of us continue to make incremental progress on the first seasons of both Speechless and Blackish, both of which we’ve been watching for years; Beth, Noah, and I have started Dickinson (which is very strange and very good); and Noah and I are nearing the end of the fifth and final season of the crazy complicated and addictive drama Orphan Black, which we started last summer. Noah and I are reading, too. We finished American War and we’re more than halfway through The Testaments. I think we’ll manage to finish it before he goes back to school on MLK day.

We had a little snow in the middle of last week, about a half inch, that resulted in an early dismissal and a two-hour delay, but North went to school for at least part of the day every day, which I count as a win this time of the year. Plus, it was the kind of snow that clings prettily to tree branches, and turns lawns white, but doesn’t stick to the sidewalks, so there was nothing to shovel. Noah and I took a lovely walk through the falling snow on Tuesday afternoon and ended up at Starbucks, where I got a mocha and he got his standard winter drink—the caramel apple spice. He enjoys the idea of hot apple juice with whipped cream (and the reality, too).

And speaking of things that happen in January, Beth and I had an anniversary this weekend. On Saturday it was the twenty-eighth anniversary of our commitment ceremony and the seventh anniversary of our legal wedding. This means we’ve now been married for a quarter of the time we wanted to be. I am looking forward to watching that fraction get bigger with time.

Beth was awake and looking at her phone before I woke up on Saturday and when I started stirring she told me Facebook had made us an anniversary video, which means it wished us a happy anniversary before either of us had wished to each other. Ah, modern life…

Beth took North to therapy and then they ran some errands while Noah and I watched Orphan Black. In the late morning, I started making our anniversary cake, which we served at our commitment ceremony and I’ve made on almost all our anniversaries since then. (In the early years I forgot once or twice.) It’s a spice cake, with a lemon glaze. Last year I mixed things up by making an orange glaze and there were protests. North went over to Zoë’s house around noon and after the remaining three of us had lunch and Beth did a little work, we watched three episodes of Dickinson, then Noah and I read a couple sections of The Testaments and I frosted the cake, adding some red sugar, leftover from Christmas baking.

Beth and I left around four o’clock to go on our anniversary date—Harriet and dinner at a Burmese restaurant. It was interesting to see this movie when we did because on New Year’s Day, Beth, Noah, and I went on a first day hike on an Underground Railroad trail at Woodlawn Manor Cultural Park. It’s a guided hike, with two interpreters providing background about the Underground Railroad in Montgomery County as you walk through the woods. I recommend the hike, if you’re local. It’s usually not done in the winter, though—they added a New Year’s Day hike this year—so you’ll have to wait until spring if you want to do it. It’s not dramatized, but it’s full of interesting stories and it really makes you think about what it would be like when you’re walking in the very place escaped enslaved people once did. I also enjoyed the film, despite some hokey moments. Harriet Tubman’s story is a truly amazing and inspiring one. (Beth said it made her annoyed all over again that she’s not on the twenty-dollar bill yet.)

After the film we went to dinner at Mandalay, which is one of our stand-by restaurants. There was a surprisingly long wait, but once the food came it was delicious, as usual, and the wait gave us time to talk. It was a very nice date.

We returned to the house to find Noah, North, and Zoë (who was sleeping over at our house) watching a movie in the living room. It had fifteen minutes left, so Beth and I exchanged cards and gifts while we waited for the teens to be available to eat cake. I got Beth a new wallet, and she got me two books, The Girls and My Sister, the Serial Killer, both of which look good, plus a roll of postcard stamps. I asked for these, to help me get back on track writing for Postcards to Voters. I imagine it’s going to be a busy year for that. When I opened my card from Beth, she asked me if she’d gotten it for me before. I said yes, that I’d kept it on the windowsill near my desk for a long time.

It wasn’t until the next morning, when I opened the old card that I noticed that inside she’d written:

And in the new card, she’d written:

When I showed it to Beth and North, North said “You’re so basic.”

Beth protested she wasn’t basic, she was “unchanging, like a rock.”

“You’re my rock,” I told her, giving her a hug. And then she said she supposed this was going in my blog, and of course, she was right.

At dinner that night, I showed the cards to Noah and the teasing began anew. I noted she had changed a word, adding “love” in this year’s card. Beth said it was evidence that her “ardor has increased.” And then she predicted, “Two years from now it will be “lots of love.”

Stay tuned to see if that’s how it turns out. I’m pretty sure we’ll be eating the same cake.