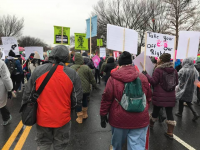 We have pizza every Friday night—we either go out, get delivery, or heat up frozen pizza. Because Noah came home from school on a Friday night and he had not eaten much all day, we got him Sbarro at Union Station, and after that I started measuring his time at home in pizza. Pizza #2 was at the lodge at Blackwater Falls State Park two days after Christmas; pizza #3 was frozen pizza at home I dressed up a bit with parsley from my winter herb garden, vegetarian sausage, and some veggies we had on hand; pizza #4 was delivery; and the fifth and final pizza was frozen again. This seemed kind of anti-climactic and I considered suggesting we go out, but Beth was having a busy week at work and she’d come home early the day before to go see the school play at North’s school—North was not in it, but some of their friends were—so I didn’t. It was after we’d eaten that last pizza and then settled in for our last Friday night family television night that it began to seem like he really would leave in a few days. (We watched three episodes of Speechless and finished the first season, which we’ve been watching for about two years. It only ran for three seasons so I joked we might finish it in another four years.)

I know most of you with kids in college didn’t have yours home for a whole month, so I should not complain. He had a nice stay and I got to spend more time with him that anyone else because for the last two and a half weeks, Beth and North were at work and school and he and I were at home together. Of course I was working, too, but we found time to watch television, read, take walks, and run errands together. He was useful around the house, too, cooking, cleaning, folding laundry, and doing a little yard work. Thanks to him, the digital clock in the dining room that runs slow now displays the correct time, the blades of the ceiling fan in our bedroom are clean, and the air-conditioning units are out of the windows and down in the basement.

Because he doesn’t volunteer a lot, a month was about how long it took to get some minimal information about his classes and his social life out of him, but it seems like he had a good first semester. He has a couple friends, he enjoyed his classes, and his grades were good. (About a week and a half ago, I had coffee with a mom of one of Noah’s preschool classmates and while we were talking the mom of one of his best friends from kindergarten saw us and came over and we all talked about our brand new college students. All three kids seems to have adjusted well to college life and all three brought home dirty laundry. It was good to hear about his long-ago friends and how they’re doing.)

Saturday was the fourth annual Women’s March, so Noah also got to attend a protest in D.C. before he left. Beth had asked him to come film the CWA contingent, and I came along, too. North was not interested in marching on a day with sleet in the forecast, so they spent the morning at their friend Norma’s apartment and roaming around downtown Silver Spring together.

After we dropped North off at Norma’s building, we drove to the Metro and took it to the city. I saw women with pussy hats approaching the station at Brookland and there was a group of women sitting behind us talking about picketing Mike Pence’s house who I thought were almost surely headed where we were headed. Another group of women holding hand-made signs but piled up in a way you couldn’t read them were probably also headed to the march either to participate or possibly counter protest—the annual March for Life is on Friday, and there are some early arrivals around town.

At Beth’s office building, people were gathering in the lobby, making signs, and partaking of hot drinks, juice, and snacks. It was not as big a crowd as CWA had at the first Women’s March, but there was a decent turnout, especially from one New York local. They were easy to identify because they all had matching jackets. They’d been on the road since six a.m. and seemed energetic and happy to be there. Several of them had brought their kids.

We socialized with people Beth knew, especially Mike who’s married to the CWA Secretary-Treasurer and is a photographer who’s mentored Noah from time to time. Mike and Sara’s oldest daughter Rose applied to the Visual Arts Center (where North also applied) for high school, so we talked about that and how Noah’s first semester of college went. When it was time to get going, Sara gave a short speech about what it meant to her to be at the march with her three girls, who stood with her, displaying their signs. June, the middle daughter, is ten years old and running for President in 2048. She has professional-looking buttons made already. I look forward to voting for her.

Then we set off for Freedom Plaza, as snowflakes sailed lazily through the air around us and then melted on the sidewalk. Shortly after we arrived, the snow turned to freezing rain, as predicted, but it was more like freezing drizzle, so we didn’t get soaked. There were speeches, but we were too far away from the stage to hear much, except for Las Tesis singing “El violador eres tú”, so we people-watched and read signs instead. I have to say “Any Non-Criminal 2020,” was my favorite because it matched my feelings about this Presidential race. There are some candidates I like more than others, but my bar is pretty low. (Noah and I watched the debate on Tuesday and I thought everyone came off pretty well, though he and I had similar reactions to the Warren-Sanders spat. It’s puzzling to try to imagine what actually happened because it doesn’t sound like something he’d say and she doesn’t seem like one to flat-out lie.) As always, there were also a lot of pussy hats and baby Trump balloons and someone had made a MAGA cap out of an umbrella by covering it with red cloth and attaching a bill, but instead of MAGA, it said, “IMPEACHED.” To make things complete, there were also some anti-abortion protesters with bloody fetus posters and a man with a bullhorn who got right up into Beth’s face, yelling about abortion.

Once the marching started, there were the usual chants. I always like “Tell me what democracy looks like. This is what democracy looks like.” Based on when I could hear his voice, Noah seemed to like “Say it loud, say it clear. Refugees are welcome here” best. (Sometimes it was “immigrants are welcome here.”) People were also chanting, “We need a leader, not a creepy tweeter,” and “Hey, hey. Hey ho, patriarchy has got to go.” Beth said she thought that seemed like a tall order, and she’d settle for getting rid of the current President as a start.

After a while, a group started to sing, “This Little Light of Mine,” and then “We Will Overcome” and it was nice to sing something uplifting after all the chanting. The march couldn’t go in front of the White House, because Pennsylvania Ave. was blocked off and we’d gotten separated from the CWA contingent, so we abandoned plans to have Noah film the group in front of the White House and we split off from the march before it was quite done. We ducked into a Potbelly where I waited in line for almost twenty minutes to use the restroom and then we found a nearby Noodles and Company where we enjoyed a hot lunch. (I got tomato soup and mac-n-cheese with broccoli and it was quite restorative after a couple hours in the cold and wet.)

We came home and Noah and I finished the fifth and final season of Orphan Black, and North’s friend Jade came over, and after she left we all went out to dinner at Vicino, Noah’s favorite Italian restaurant and he got baked ziti, which is his favorite dish there. After North went to bed, the rest of us watched an episode of Dickinson. We’d decided we were all about finishing series or at least seasons of series before Noah left.

Sunday after various people went grocery shopping, swimming, and to the library, we continued our binge-watching. The four of us knocked out the last three episodes of the first season of Blackish, which we’ve also been watching for years. This show is in its sixth season, plus there are two spinoffs, so chances are we will never finish that one. But we were undaunted and after North went to bed, we watched the last two episodes of Dickinson.

Monday morning, Beth made a send-off breakfast of banana-chocolate chip pancakes. As we ate, we decided to skip our annual MLK day service project because the timing of Noah’s bus which left at eleven made it difficult, as most organized projects take place in the morning. North suggested we give money to an anti-racist organization in lieu of direct service and we decided on the Southern Poverty Law Center.

After breakfast, I folded the last load of laundry with Noah’s clothes in it and handed him a stack of clothes. I also prepared a bag of snacks for the bus ride to Ithaca, since there’s not always time for meals when the bus stops at rest stops. I sliced apples and carrot sticks, and put tortilla chips and walnuts in bags.

“Steph made you healthy snacks and I got you a candy bar,” Beth observed to Noah. “Who loves you more?”

At ten a.m., we left for Union Station and dropped Noah off at the bus bay thirty-five minutes later. There were a lot of parents hugging their college-aged kids and one mom trying to get on the bus with something her son forgot. We got drinks at one of the Starbucks inside the station afterward and while we were sitting just off the ornate lobby partaking of them, Noah texted to say he’d forgotten his brown bag of food. My impulse was to rush to the car and get it, but it was the exact time the bus was supposed to leave and when we got back to the car it wasn’t there anyway. He’d left it in his room. Well, so much for providing him with something healthy… I ate the apple slices and carrot sticks with my own lunch.

So, as I write, Noah’s on a bus, speeding toward Ithaca and his second semester of college. He’ll be playing percussion in the non-music majors band, which means he’ll have a musical outlet, which makes me happy. He’s also taking a computer science class, an environmental science class, Intro to Audio, and Intro to Media Industries (which is about the ethical, legal,  technological, economic and creative issues raised by new media). We’ll see him in early March when he comes home for spring break. As I told him as he got on the bus, I’ll miss him but I’m proud of him.