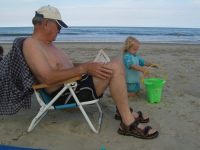 My stepfather Jim died yesterday morning. He’d had a massive hemorrhagic stroke about a week and a half earlier, but he seemed stable and to be gradually recovering so it was a shock for everyone.

The day Jim had the stroke, before I knew, before it happened, I was walking home and I passed by Long Branch creek, where every year some time in February or March the woods explode in pale purple crocuses. This sight is one of my favorite heralds of spring, so I detoured to walk along the dirt path along the creek, with crocuses growing all around me. I found one that had snapped off at the bottom of its stem and was lying on the ground. I picked it up, took it home, and put it in a little paper cup of water on my desk. By evening, after it had happened, after I knew, I saw the flower had already wilted, causing me to think about how fragile life and health are. Jim had gone from seeming perfectly healthy to being partly paralyzed and deeply disoriented in a heartbeat.

Jim had the stroke at my sister Sara’s house. He had been helping her build a tiny house she intends to use as a rental property in her yard and the cabinets had arrived. He collapsed and couldn’t get up. Sara called an ambulance and followed in her car after it. Luckily, her long-distance boyfriend Dave happened to be in town and could look after her almost four-year-old daughter. She called me en route to the hospital.

Jim was intensive care for the whole time he was in the hospital. They were thinking they might be able move him to a regular unit several days ago but he still needed the tube draining fluid out of his head so they were waiting. He had limited mobility and some numbness on the right side of his body, though my mom says he had gotten some of the feeling back in his face and could move his leg a little. He could carry on a conversation, but he was still confused much of the time, he couldn’t read, and he slept a lot. After a week or so, he could say when he was born, which was progress, but whenever they asked him what year it is, he guessed something different, often in the 1960s but once in the 30s, which is actually before he was born.

Jim couldn’t have too many visitors in the ICU, but some friends were able to see him and my Aunt Peggy, Uncle Darryl, and cousin Blake were passing through Oregon anyway so they detoured for a weekend visit to offer their support.

As I said, everyone thought he was going to make it. The doctors even said a full recovery might be possible, though it wasn’t certain and it would be at least a year. My mother was hoping that when he was ready to transfer out of the ICU he could go to the hospital’s rehabilitation center and she’d already toured it. But on Thursday he was having trouble breathing and he deteriorated from that point. The doctors think he might have had a pulmonary embolism but it was too dangerous to give him blood thinners because he still had blood on his brain.

I got the news about a half hour before June was due home from school. The kids had an early dismissal that day and she was bringing a friend home for an almost five-hour play date. I decided not to tell her or Noah until her friend had left. I made the girls some quesadillas and left them to their own devices. They played with June’s American Girl doll. June was the doll’s mother. Zoë was her kidnapper. They made an improvised soup with water, lime juice, raw celery, and fake chicken. They watched Word Girl and Maya and Miguel, while I listened to their play with a heavy heart.

An hour or so before Zoë’s mom was due to come get her, June asked if she could sleep over. I told her it wasn’t a good night and she wanted to know why. I told her I’d tell her later. She kept pestering me to know why, which was a bit awkward, but once Zoë was gone I called the kids together and told them.

June burst into tears. Noah looked stoic but sad. It was about what I expected from each of them. I hugged June first and then Noah. She cried, “All my grandfathers are dead!” It’s true. Both my dad and Beth’s dad died while she was in preschool. I told her Jim had lived long enough for her to “remember him forever” because she doesn’t really remember either of the other two grandfathers. She nodded. Noah was silent but gave me a hard hug back when I hugged him.

We had pizza, a little late, because I was distracted and forgot to order it. Friday is normally family movie night, a newly instituted tradition, and after some discussion we decided to go through with it, but just as Beth was finding Time Bandits, June announced she had a headache and wanted to go to bed early and Noah didn’t want to have family movie night without her, so Beth and I watched Spotlight and went to bed.

Because Jim wanted to be cremated instead of buried, there’s no rush to have a funeral. My mom is going to scatter his ashes at one of their favorite spots on the Oregon coast and she’s thinking of a memorial service in April. She’d like to have it at the church where her peace choir sings. She doesn’t attend this church, but it’s pretty and she’d like the choir to sing at the service.

Mom and Jim started dating when I was in tenth grade and they got married in the spring of my junior year of high school. It was a second marriage for them both. For twenty years of their almost thirty-four-year marriage they lived in a big old house in the Philadelphia suburbs, in Delaware County. He was renovating it the entire time because restoring houses was both his work and his passion.

Four years ago, they moved to Oregon. Their house there was newer and less in need of work, but in between their frequent camping trips and visits to Mom’s family in Idaho, Jim still spent a lot of time doing work on my sister’s house. So, it’s fitting that’s what he was doing when he fell ill. Helping people was second nature to him.

Our family has lost a husband to one, stepfather to two, and grandfather to three. He will be missed.