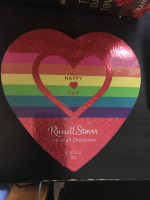 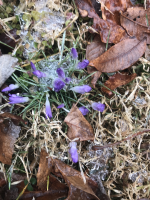 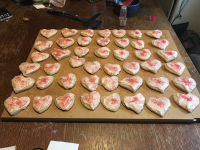 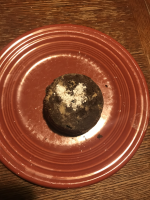 Some years I really like Valentine’s Day and some years it leaves me lukewarm. It’s not like Halloween, which consistently delights, or Christmas, which can make the whole month before seem cheerful. This year, though, I guess we all needed it. Ten days before the holiday, Beth went to the grocery store. Part of her mission was to pick up some heart-shaped boxes of chocolates for North’s three best friends—Zoë, Miles, and Maddie. While she was in the candy section, she picked up a rainbow-striped box of chocolates for me, and gave it to me as soon as she got home.

It had six pieces. I picked the two most unusual—Roman nougat and molasses chew– to eat right away. I had to look up what Roman nougat is, so there would be no surprises—it’s cherry with nuts. I recommend it, if you’re not one of those anti-nougat people. I offered Beth the chocolate cream, but she declined, so I had it the next day with the coconut cream. I gave Noah the caramel and North the vanilla cream, because I was feeling generous.

We were all full of Valentine’s plans, more than a week before the holiday. Sunday is Beth’s cooking night and she wanted to make a special dinner, though she hadn’t decided what to cook yet. North volunteered that Valentine’s Day dinner is often a tomato-based soup and grilled cheese cut into heart shapes. I said I thought Beth might have something fancier in mind and Noah said, “What could be fancier than heart-shaped grilled cheese?”

Inspired, I think, by the pretty pink-frosted cookies my blog friend Nicole makes every Valentine’s Day (Hi, Nicole!), I was planning to make heart-shaped sugar cookies with pink frosting. North said they wanted to help. I posted on Facebook that it seemed we had “a greater need of Valentine’s Day than usual.” And who wouldn’t, after eleven months of semi-quarantine? Beth also has some pent-up snow frustration, I think, because she wants more snow and less sleet and freezing rain, which she considers “a waste of precipitation.”

At the end of my last post, I mentioned there was a chance of snow for six out of the next nine days, and it so happens it’s been exactly nine days since then. Well, we didn’t get six days of snow. We had a half-inch of slushy snow on Wednesday and an ice storm on Saturday, and that’s not counting whatever fell while we were asleep or not looking, because often it did look as if something wet had fallen from the sky but it was hard to say exactly what.

The ice storm was pretty, though. Everything in our yard was encased in ice. I knew it would melt quickly, so I suggested to our resident photographer that he go out and take some pictures of it and he did, even though it was sleeting. I didn’t think I’d have to go out in the messy weather, but just as North and I were getting started on the cookie dough, I noticed we’d caught a mouse in one of the humane traps in the lazy Susan. Its tail had gotten stuck in the door and it was struggling, so I didn’t think I could in good conscience set the trap on the porch and go release its occupant later. I left North to finish the dough, pulled on my boots, grabbed my umbrella, walked down to the creek, crossed the bridge, and walked a little bit into the woods where I released it into some dry leaves in a hollow under a stump. I left the peanut-butter smeared crackers that had lured it into the trap there, too, because North thinks that’s only fair. On my way back, I noticed the first crocuses I’d seen in bloom this year, closed, but poking up out of the icy grass.

The dough had to refrigerate for two hours, but we managed to get the cookies cut, baked, and frosted by three-thirty, at which point Noah and I watched The Shining. We’d read the book over Christmas break, so it was fun to see the (very different) film version, especially on a day of wintry, if not snowy, weather. He told me the song played in the opening sequence, “Dies Irae,” is often used to signify death in film because it’s played at funerals, and then he wondered if the overhead shots of the car on the mountain road were taken with a drone, because 1980 seemed too early for drones, but the shots looked too close for a helicopter. ( I looked it up. It was a helicopter.)

Noah and I made dinner—pasta with a turmeric cream sauce and a salad—and talked more about the film. I contrasted the characterizations and symbolism in the novel and film versions. I used to teach the novel, so I had a lot to say and he was a good listener. After dinner, the four of us finished watching 9 to 5, which we’d started the night before. North was continually surprised by the lawlessness of the main characters.

It was a nice day, with one-on-one time with both kids, and some family time, too. It was marred only by the Senate acquitting former President Trump in the impeachment trial. I mean, I wasn’t surprised or anything, but it’s still galling. I really wouldn’t care if I thought he was just going to crawl under a rock and never be heard from again, but I’m not counting on that. Can I say, though, how proud I am to be Representative Jamie Raskin’s constituent?

The big day was Sunday. Beth left to go grocery shopping before both kids were up, so we decided to exchange gifts after lunch. Our usual Valentine’s Day protocol is that Beth and I get each other presents and we also get presents for the kids and the kids get a gift, usually food, for the whole family. It ended up being a festival of chocolate. I got chocolate caramels for Beth and she got me ganache-filled chocolate hearts. We got chocolate frogs for North and chocolate-covered almonds for Noah. Noah got the family two loaves of bread, one sourdough, and one chocolate sourdough. He suggested we freeze the chocolate sourdough loaf so when we finally finish all the chocolate we won’t have to be sad because there will be more. It seemed like a good idea.

Even Xander got some cat treats, because we celebrated his eighteenth birthday on Valentine’s Day. We don’t know the exact day of his birth, but the shelter said he came from a mid-February litter and at some point North decided his birthday should be Valentine’s Day.

After the gift exchange, Beth drove North to deliver baggies of heart cookies and boxes of chocolate to their friends and they had a short, outside visit with Miles and Maddie. I took advantage of the relatively empty house to take a nap because I hadn’t slept well the night before and I was tired. The nap was short but restorative. Beth got home just as I was waking up and she told me, laughing, that the twins had made a pan of brownies for North. You might think more chocolate was the last thing we needed, but I, for one, was not going to say no. I had one, and it was gooey and good.

I had a nice talk with my mom in the late afternoon. She’d gotten her first vaccination the day before. We capped off the day with a tasty Lunar New Year’s-themed dinner Beth made, consisting of a tofu and vegetable stir-fry on curly noodles and shiitake mushrooms braised in oyster sauce and then Beth, Noah, and I watched an episode of Buffy, the Vampire Slayer, which we do every Sunday now, much to my delight. While we watched, North was baking little chocolate lava cakes with powdered sugar hearts on them. It was their gift to the family and we ate them all together. It was a very satisfying Valentine’s Day, and just what we needed.