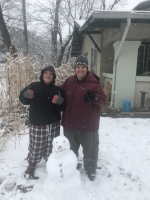 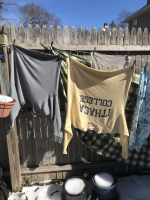 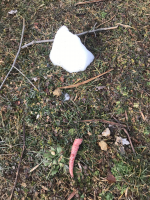 We had a little snowstorm that started on the last day of January and continued on and off for through the first two days of February. It was a desultory kind of snow, so even falling on and off for that long, it only came to five inches, but it was pretty and fluffy and didn’t cancel school, so it was fine by me.

In the two days before it snowed, completely by coincidence and with various members of my family, I watched a movie (Weathering with You), and a television show (His Dark Materials), and read a book (Trail of Lightning) in which one or more character could control the weather. There was one who could stop the rain, one who caused lightning strikes, and two could create wind. Noah said it must have something to do with the fact that we were awaiting “a major meteorological event.” Now maybe where you live, five inches of snow does not qualify as a major meteorological event, but we haven’t had that much snow in a couple years, so people were excited. I have to say, though, if Beth had the power to control the weather, it wouldn’t have been that long a wait.

The first inch of the snow fell early Sunday morning and by lunchtime, we had two and a half inches. Beth shoveled the walk (for the first of three times over the next three days). She and North made a smiling snowman in the front yard and then they went to the back yard where Beth made a snow angel, and the two of them threw snowballs at the fence, and finally Beth lay in the hammock, watching the snow fall down on her. Then they came inside and played an online mystery-solving game (Jenny LeClue). North and I made three-layer crème de menthe brownies over the course of the day. There’s a brownie layer, then a mint frosting layer, and a hard chocolate coating on top. Each layer needs to cool before you can apply the next one, so it’s an long project. North said it was “the best day.”

Monday there was some freezing rain before it began to snow again and a lot of sidewalks were glazed with ice. (Not ours. Beth takes a great deal of pride in keeping our walk clear in winter weather.) I needed to go to the post office and I thought I’d take a bus and then walk the mile and a half home, but after creeping forward one careful step at a time in the slick spots and still slipping and almost falling several times, I decided it was too perilous and stopped at a bus stop about halfway home. I felt like an old woman, afraid to break a hip, but I guess it was the sensible thing to do.

Tuesday it was still snowing and we had a nice soft new layer on top of the frozen crust. The sidewalks were either clear or slushy, so walking was easier. North and I took a stroll to Starbucks, where I got a mocha and a croissant to dip into it and North got a slice of red velvet loaf, and inexplicably, an iced pink drink. It was Groundhog’s Day and apparently it was sunnier in Punxsutawney, because Phil predicted six more weeks of winter. For once, I didn’t really mind.

After a solid week of cloudy skies and frosty temperatures, on Thursday it was sunny all day and by the afternoon it got up into the mid-forties. Knowing it was going to be a mild day, I hung laundry on the line in the morning before it was above freezing out and the clothes froze to the pins. Undeterred, when I took my daily walk I left my winter coat and gloves at home and was warm enough in a hoodie, and then I read the newspaper in a sunny corner of the porch. I actually do this even when it’s pretty cold—and my threshold for what’s too cold has lowered during covid times, as I have a greater need to find a little corner of the property where I can be alone for a bit.

But even though it wasn’t novel, my porch sitting was more pleasant than it had been earlier in the week, when I’d head inside after ten or fifteen chilly minutes. When I’d been reading almost a half hour I noticed the gurgling of snowmelt in the downspout next to me. That inspired me to get up and go around back to see how the laundry was doing. Most of it had thawed, all except the pieces that were still in shadow and hanging stiff on the line. When I brought the wash in late that afternoon, it had all dried except a pair of jeans, which is a good success rate for February.

After almost a week on the ground and three days with highs in the forties or low fifties, the snow had pretty much completed disappeared by Saturday afternoon and the snowman was a lump about the size of a basketball. Beth was happy, though, because more snow was predicted early this morning, possibly as much as three inches.

I woke at 6:30 today, went to the bathroom, and noticed it was raining and there was no snow on the ground. I felt sorry for Beth, went back to bed, and slept until almost eight. When I woke again, it was snowing. Over the course of the morning and into the early afternoon it kept changing from snow to sleet to rain and back to snow. It didn’t stick to the sidewalks or roads and just barely to the grass, where it turned to a thin layer of slush, probably never more than a half-inch at a time. There were dramatic bursts of heavy snow, though, sailing in big lazy flakes through the air. I spent some time at the window of the front door, watching it and I saw Noah doing the same thing. I wondered if it reminded him of being in Ithaca last winter, before covid sent him home for an extended spring break eleven months ago. By two o’clock, the snow had stopped falling and melted almost completely, leaving an even smaller remnant of last weekend’s snowman.

It was the kind of weather that seemed more appealing to watch from inside than to go out in, so except for Beth, who went grocery shopping, no one ventured out. But according to my weather app, there’s at least some chance of snow on six of the next nine days. After what Beth calls a “snow drought,” we’re finally getting some winter weather.