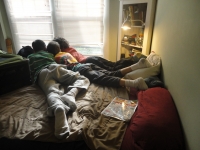 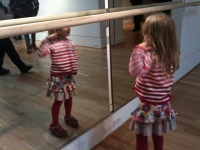 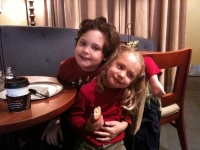 The kids go back to school tomorrow.  We split their winter break in half so we had five days at Mom’s and five days at home. This was a very satisfactory arrangement. It felt like a substantial visit with the extended family and a nice block of time for nuclear family togetherness as well.  We didn’t do everything we considered—Beth decided against going into her office to straighten it up and do some filing, and we never got organized enough to go to see the U.S. Botanic Garden’s holiday exhibit, but we had a long outing and a short one, we had family friends over on New Year’s Eve Day, and Noah played with three school friends and June with two, and we (mostly Beth) did a lot of cleaning and straightening and hanging pictures and fixing things around the house, so I think our time was well spent.

There’s a Degas exhibit at the Phillips Collection that’s been there since October.  We tried organizing a three-ballerina expedition with Talia’s and Gabriella’s families in the fall but we could never find a date that worked so we decided to go and see it ourselves before it leaves town.  The Phillips is in Dupont Circle, the D.C. neighborhood of our childless (and Noah’s babyhood) days so it’s full of sentimental appeal.  We visited a few of our old stomping grounds, including Café Luna, where we ate lunch (pointing out to Noah the Thai restaurant next door where we ate dinner the night before he was born) and Kramerbooks a combination bookstore/restaurant where we had desert after the exhibit and bought books.  I got my next two book club books (Catch-22 and Les Miserables) and June picked out a couple of Dora books, including one in Spanish.  I find it satisfying to buy books in a store these days as bookstores are disappearing rapidly in our area (and probably yours too). I like to support them when I get the chance, in hopes they will not go completely extinct.

In between, we visited the museum.  June enjoyed the ballerina paintings (and looking at herself in the mirrored wall with a barre) but she went through the exhibit at her usual brisk pace, which meant we could not linger as long as the adults might have liked.  Noah liked the sculptures best and was also interested in the computer images of what lies under the visible layer of paint.  When we finished with Degas, we visited some other parts of the museum.  We went into the Rothko room, much to the alarm of the guards, who insisted that June’s hand be held at all times.  (The paintings in that room are not under glass.) June gave the guard an exasperated look when she heard this.  Clearly he did not know how well behaved she is and how many tiger paws she has (twenty-three, third place in her class- not that she’s keeping track).  For a while the kids played a game of Noah’s invention called “Guess the Medium,” in which he’d have June guess whether a piece of art was done in paint, chalk, water color, etc. I caught a glimpse of them spontaneously holding hands in front of a painting (though later Noah claimed he’d done no such thing).  It was a lovely, lovely day, just like old times, except completely different.

We didn’t do much on Friday. Noah went over to Sasha’s and the rest of us hung around the house and June played with new Christmas toys while Beth and I cleaned in anticipation of our New Year’s Eve Day guests.  Saturday morning we cleaned some more and made peanut butter cookies with Hershey’s kisses baked into them and I set out our spread of sparkling juice, fruit, crackers and fancy cheeses, cookies and candy.  Noah helped by making little labels for the cheeses, which he stuck into them with toothpicks. They looked like little flags.

Joyce, her husband Smitty and their nine-year-old daughter Gwen came for lunch.  Joyce and I once shared a tiny, windowless, computerless office–which we affectionately called The Shoebox–with five other adjuncts and teaching assistants at George Washington University, when she was a graduate student there and I was an adjunct, back before our kids were born. We reminisced about that and caught each other up on our current lives (she’s an English professor at Ball State University now) and we ate a lot of cheese while the kids made videos on the computer.  I always enjoy seeing Joyce, even though her visits are far between now that she lives in Indiana.

We listened to Christmas music all through the visit and into the evening.  After our guests left we watched our last Christmas movie Santa Claus is Comin’ to Town, before declaring ourselves done with Christmas (okay, we will finish the sweets). We didn’t stay up to welcome in the New Year.  Beth and I were in bed before ten p.m., but we had a very pleasant New Year’s Eve nonetheless.

New Year’s Day was another quiet day, full of grocery shopping and little home improvement projects. Noah and Beth took turns showing me how to use various functions of my new iPod so now I can listen to music, the radio and podcasts, if I remember their instructions.  I made black-eyed peas for good luck in the coming year and I finally made good on a resolution to get June some play dates already. She hasn’t had one in months and she’s been asking for ages to have someone come play.  She and her friend played instruments and danced and played Chutes and Ladders and had an earnest conversation about how no one should make fun of Rapunzel because of her long hair.

Monday was the last day of the kids’ break.  We drove all the way out to Bethesda to have breakfast at Cosi because Noah was in the mood for square bagels.  There’s a Barnes and Noble nearby and Noah was also wanting a couple more 39 Clues books he didn’t get for Christmas, so he bought them himself.  June picked up a discounted Bambi book for herself as well, also using saved allowance.  I was feeling positively virtuous for having patronized two bookstores in five days, even if one was a big chain.

I snuck in a short editing job while June watched television and after lunch, Beth went out for coffee with Lesley and the kids had a play date extravaganza.  June had another friend over and Noah’s twin friends came over, too.  The big kids played with hexbugs and huddled together on our bed playing a game on Noah’s iPod.  The little kids played Chutes and Ladders and staged a medieval lesbian wedding between two of the Playmobile castle women, witnessed by reindeer and snowmen figurines. Later they ran around in the back yard, jumped on the mini-trampoline, played the Cat in the Hat game and made masks from June’s mask kit.  Everyone played so well together I was able to read a longish Margaret Atwood story from The New Yorker in relative peace.

The whole five days felt relaxed and fun and productive at the same time.  The house looks better than usual, as Beth did some deep cleaning and I feel ready to return to work tomorrow (that is if the snow flurries we had this afternoon don’t turn into something serious enough to cancel school).

Sara asked me over Christmas if I’m happy and I gave her a mixed report, but on consideration, I think I really am a lot happier than I was a year ago when I could see June’s preschool years drawing to a close but I had no idea what that would mean for me (see my 1/9/11 post).  Even though Noah will start middle school in 2012 and it’s bound to be an interesting year politically, I feel that the big changes for me have already happened with my transition from stay-at-home mom to part-time work-at-home mom.  The New Year’s just begun– we’re two days in and I’m ready to see what the rest of it holds.