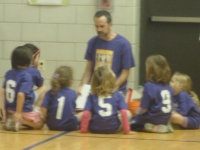 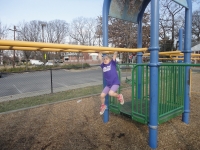 Friday morning at breakfast I told June that she would have an unusual afternoon. After playing outside and watching television (these are the usual parts of her after-school routine) she’d have a bath and we’d have an early dinner because we were leaving for basketball practice at 5:40 and we wouldn’t get back until bedtime.  June perked up on hearing this. She loves starting new things, which is why she’s already starting her third team sport a few months before her sixth birthday.  She’s allowed up to two extracurricular activities at a time. Fall was soccer and ballet.  Winter is basketball and yoga. Yoga will be an after-school class on Tuesdays, which I think will make things easier in terms of weekend scheduling because basketball actually meets twice a week—Friday evening practices and Saturday morning or afternoon games.

That afternoon she came home, played in the yard while I took clothes off the clothesline, watched Maya and Miguel and Arthur, her current favorites, took a quick bath and then got changed into a t-shirt and bike shorts underneath sweatpants and a long-sleeved shirt. I ordered pizza and the kids and I were eating before 5:00 p.m.  After dinner I pulled her still damp hair into pigtails and we were on the porch waiting for our ride at 5:40. It had been a stunningly beautiful sunny day after a four-day-long cold snap and it was still quite warm, if dark, so June was happy to climb on the porch walls and jump over the row of candy cane lights that still adorn our yard.

June’s team is an all-girl, mostly kindergarten team being coached by Maggie’s dad Mike, who was giving us a ride because Beth is not home early enough. In the min-van along with Maggie, Mike, June and me, was another player (the youngest one, who’s still in preschool) and her older sister, a middle-schooler, who’s serving as Mike’s assistant coach.  We drove to the elementary school where practice is held.  The gym was packed. All the kindergarten teams were there and there were probably at least fifty kids, plus parents and coaches. Among the kids on other teams we saw two of June’s classmates, including Malachi, and a former nursery school classmate.

Some of the time all the teams practiced together—watching fifty five and six year olds all running around the gym and dribbling was particularly impressive—but mostly they were split into their teams.  Mike obviously put a lot of thought into the games and activities he designed, and he followed Maggie’s interests.  There was a game called “Protect the Princess,” in which laminated printouts of Disney and Star Wars heroines and villains were scattered on the floor.  The girls had to try to dribble the basketballs on the villains while avoiding the princesses. The game I played with them was “Magic Rock.”  The girls were fairies passing each other a magic rock (i.e. basketball) while a witch (me) or troll (Mike) tried to block them.  If they could complete six passes before the witch/troll intercepted the ball, the villain fell asleep and the fairies won.  There was another game called “Loose Ball.” All the players except one had to stand facing the wall while the other one tossed the ball into the air as high as she could and yelled “Loose ball!” at which point they’d all turn around and scramble to catch it. During the course of this game one the girls made a basket, completely by accident. I wondered if we’d found our center because those baskets are eight feet off the ground and the average girl on the team might be over four feet tall if she stood on tiptoe.  (June’s not even three and a half feet tall.) I wondered if any of them would ever score in a real game.

During the team meeting Mike produced the team shirts, purple much to June’s delight, and the girls voted on a team name from a list Maggie had brainstormed ahead of time (though there were a couple more candidates added).  The Purple Pandas won, with the Purple Penguins a close second.  (One girl suggested the Purple Grapes because her soccer team was called the Orange Oranges.)  Mike talked about being a team and being a good sport and solicited opinions about what that might mean, then he asked them to each name something for which they were thankful. June said that trees made oxygen for people to breathe, but the gym was too loud for me to hear most of the other girls’ responses.

In the van on the way home, Mike asked the girls what they liked about practice. June wasn’t specific– she just said, “I loved it!”  Later she said she liked dribbling the ball and the “Protect the Princess” game.

This morning June wanted some temporary tattoos applied and Beth replied in an off-hand way that it was a good idea because basketball players have a lot of tattoos.  Well, that settled it. June selected a butterfly and an assortment of suns and moons, including a band of them that went around her leg just above the ankle.  She had one on every arm and leg by the time Beth had finished to her satisfaction.

This afternoon’s game was in a different elementary school gym, this one at June’s school.  When we got there the 12:00 teams were still finishing up and the 1:00 teams were drifting in so it was a bit chaotic. We saw a boy who used to attend June’s preschool leaving. When the teams were sorted out there were two kindergarten teams and two second-grade teams.  There was a half-hour practice period before the game, much of which was shooting practice.  I’d thought the fact that all the kids are so far from the basket might eliminate June’s height disadvantage but she never made a basket during the practice time (none of her shots even reached the bottom of the net), even though a few of her team-mates did. The youngest player, the one still in preschool, actually made the most.

The Purple Pandas were playing an all-boy team in green t-shirts.  Malachi and one of June’s former preschool classmates were playing on that team and they both got baskets.  (Ram also got a “bleedy nose,” as June put it later.  I didn’t see how it happened but I saw him crying and comforted by several adults and later I saw someone come to clean the blood up off the court.) Actually Malachi didn’t just get a basket, he got the majority of his team’s baskets.  I knew he liked sports and now I know why.  The kid’s got game.  The green team shut out the Purple Pandas, who often looked shocked when the green players knocked the ball out of their hands, despite having been warned by Mike both Friday and today that this would happen, that it wasn’t rude or mean, it was just part of the game.  As the game progressed the girls got better at running to defend their basket when they lost control of the ball, instead of just standing there looking shocked. So that was progress.  A few of them, including Sally (formerly known as the Raccoon) and her first-grade sister showed some hustle by the end of the game.

They all seemed happy after the game and when I asked June if she had fun, she gave me a smile and a nod.  I don’t think it’s realistic to expect basketball will be June’s sport in the long term. Gymnastics is probably more like it, based on her small size and wiry strength (not to mention her performance on the monkey bars on the school playground after the game, but I think she’ll enjoy the next two months of practices and games, and who knows, maybe one day she’ll even toss that ball in the air and see it sail through the hoop—nothing but net.