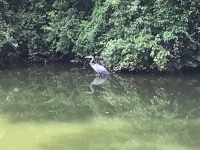 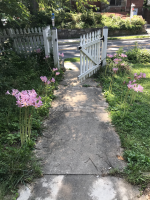 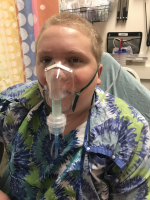 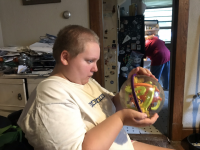 If we’re friends on Facebook you may remember that a little over a week ago, I had a dream about being on a plane with North that was mostly about the logistics of getting them settled into their seat until I went to the restroom and returned to find North missing and searched the plane frantically until receiving a text from North saying they’d slipped into another dimension and were now on a plane to China.

Beth said that’s exactly what the past few weeks had felt like. And we’ve had a lot of ups and downs medically speaking, since the dream.

But before I go into any of that, though, I want to mention a few nice things that happened that have nothing to do with North’s medical condition. First, about a week and a half ago, we had a family friend over for iced mint tea, which I made with mint from the garden. Becky was North’s preschool music teacher and her daughter used to babysit for us so we stayed in touch and she and I became friends. Although North’s been seeing friends occasionally, I haven’t since March, and just sitting in the backyard with Becky for an hour was really nice, so I resolved to have another friend over soon.

The second thing was an outing we took to Centennial Park in Howard County last weekend. Noah flew his drone, we hiked on an asphalt path that goes around the reservoir taking turns pushing the wheelchair, and we saw a blue heron, which was North’s symbol in preschool, so it always makes me happy to see one (or a painted turtle, which was Noah’s symbol). It also made me happy to see Noah running downhill holding onto North’s chair and making them laugh. If Maryland’s statistics improve and he does go back to school sometime this fall, we will all miss him. As I told Beth, “I want him to go and I want him to stay.”

The third thing is that my resurrection lilies bloomed. They bloom so consistently during the last week of July or the first week of August that when it took until the second week of August I was convinced they’d died, but then they popped out the ground and shot up, as they always do, their cheerful pink blooms atop their tall, fragile stems. It could be a lesson in patience, I suppose, if one was inclined to look at it that way.

Now back to the medical report… Two Fridays ago, in physical therapy North was able to stand about a minute holding onto a bar, and to kick a ball. Both were big breakthroughs. North’s progress has been of the two-steps-forward-one-step-back variety. Just a day after that PT session was the last day they were able to stand for almost a week, but when they were able to do it again, they could do it for around the same amount of time with no support at all and they were able to lift their feet one at a time. So they are inching forward and getting stronger. That’s the plus side.

Meanwhile, this week was bookended by an ER visit and a much longer, more complicated seizure than North had ever had. The ER visit was last Monday evening. At dinner that night, North complained of throat irritation, and a little bit later while Beth and North were sitting out on the porch, watching the rain, North started to experience difficulty breathing and was unable to speak.

We waited a few minutes to see if it got better or worse and when it got worse, Beth called 9-11 and soon there were five or six paramedics on our porch. They took North’s temperature and attached a pulse oximeter to North’s finger and found both their temperature and their oxygen saturation were normal. Listening to their breath, the paramedic didn’t hear any wheezing. He said it was up to us whether to go to the hospital or stay home. We asked North what they wanted, and they indicated they wanted to go, so we did.

North and I rode in the ambulance and Beth drove behind. Because only one parent is allowed in Children’s at a time, Beth had to wait outside the ER the whole time we were in there. Meanwhile, I had gotten motion sick in the ambulance because the passenger seat faces backward and that always makes me sick. I managed to get to a bathroom to throw up once we were inside, but a few times in the ambulance, it was a close thing.  I think the paramedic who was riding with us knew because in between asking me and North questions for the forms she was filling out she kept apologizing for bumps in the road and saying she sometimes got sick, too.

Once I’d finished filling out intake forms, we went to a room where North was hooked up to another pulse oximeter and a heart monitor and various medical professionals came and went. On the other side of the curtain, there was a Latino boy, maybe preschool age, who was there for gastrointestinal bleeding. There was an interpreter, so I heard all about his upcoming colonoscopy in English and Spanish and then he piped up that he’d had one before. When you’re in a children’s hospital, there are always reminders that things could be worse.

Eventually North had a chest and neck x-ray so the doctors could look for any obstructions, but they didn’t find any. About ten p.m., two hours after we’d arrived, a respiratory therapist came by and North got a nebulizer with a saline mist in it. The treatment lasted about ten minutes. Communicating with thumbs up or down in response to my questions, they indicated that initially it felt cool on their throat and eased the irritation but didn’t help their breathing. When it was finished, I asked again and they said they were breathing a little better.  And then a few minutes after that, they started to speak again and said they were “a lot better.”

We discussed possible causes with a doctor. I mentioned North had felt a stinging in their eyes while they were taking thyme leaves off the stem for me as I was making dinner and then had a scratchy throat after eating. I added I’d never heard of thyme being an allergen and also mentioned it’s a herb I frequently use—I grow it in the garden– but the doctor said it was a possibility. Shortly before midnight, we were discharged with a prescription for an epi pen.

Having done some reading since that night, though, we’re not really sure it was an allergy. Thyme is a very rare allergy, and the symptoms aren’t typically respiratory. It seems like it could be part of the Functional Neurological Disorder, another thing their body just stopped doing well. Still, with everything we have going on, it seems simpler to treat it like an allergy just in case, rather than getting dragging North into another doctor’s office to get tested. (It’s something we might like to do eventually, though.)

Two days later, North had an appointment with the Physical Medicine department at Children’s. This was the next stop after Neurology decided they couldn’t help. It was a disappointing meeting. Both Beth and North came out of it feeling like there was no solid plan going forward, other than continuing physical therapy and waiting weeks to see a psychologist. PT is helping with their leg strength and function, but it doesn’t address the seizures and it doesn’t get at the root cause of whatever is causing the whole disorder. North is supposed to see a psychology fellow at Children’s sometime in September (it’s not scheduled yet) and we also have a late September appointment for psychology intake at a clinic associated with Johns Hopkins. We are trying to get into the system at both institutions at once to see how each one goes because it takes so long to get an appointment.

North had their first aqua therapy appointment later that day. We’d been hoping this would be as helpful as it was with their chronic pain last year, but North had a seizure in the water and the therapist wasn’t sure we should continue with more appointments, for safety reasons. So that’s up in the air.

Speaking of seizures, North had a big one on Friday night. They were in the living room, reading pages off our mystery calendar. This is a bedtime tradition. It’s one of those page-a-day calendars, each one describing an unsolved mystery. We’d gotten several days behind and North had five pages to read. They had several seizures while reading—the kind they’ve been having all along—they slump over for up to thirty seconds and their eyes roll back, their limbs sometimes shake a little, and then they’re back to normal. During the last page, they had a new kind. It was like the short ones, but it went on much longer. And it kept seeming to end and North’s eyes would look aware and then it would start up again. This went on for five or ten minutes and when it was over it was an hour or so before they could speak.

That very day North’s physical therapist had suggested reducing North’s screen time to see if it helped with the seizures, and we’d resolved to try to get them down to two hours a day. I used to be really strict about media limits but around the time North started middle school, we were having a lot of conflicts about it and I decided it wasn’t the hill I wanted to die on. We switched to a system in which they had to complete schoolwork, a chore, and a wholesome activity and after that I wouldn’t ask how long they were spending on their phone. It worked okay when school involved going somewhere for seven hours a day and they had extracurricular activities and saw their friends often. During the pandemic, it’s been working less well. According to the stats on their phone, they’re on it six hours a day on average and that doesn’t count watching television. So, we’re trying to put the genie back in the bottle.

It’s only third day and North is having a difficult time trying to figure out what to do with themselves. So we’ve bought them a new card game with a solitaire option, a new perplexus ball, and I ordered a graphic novel from the library (which is now doing curbside pickup) as this is the kind of book North likes best.

But we are limiting any kind of reading in the evenings because on Saturday evening, while we were playing Cards Against Humanity, they had a series of short seizures and we wondered if reading late in the day could be a trigger. It might not be, though, because this afternoon North had another long seizure (about five minutes) while they were in the car with Beth. Like the other one, it was followed by about an hour of mutism. And during dinner, they had a series of medium-length ones. They weren’t reading before either of these episodes.

And in between these seizures, they walked several feet with the walker we bought in Ithaca when all this started. Steps backward, steps forward…