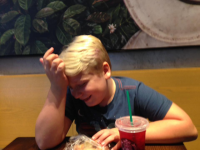 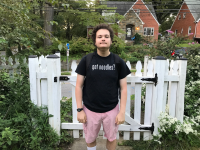 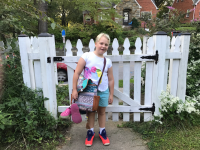 The week before school started, June went to the middle school three times—on Monday morning to help teachers set up their classrooms and earn student service learning hours, on Thursday morning for a half-day sixth grade orientation, and late Thursday afternoon for the sixth-grade picnic. I was grateful for these activities both to keep June occupied and to make the school a more familiar place. Aside from our visit to Hershey Park, June had been kind of bored the last few weeks of break, at least until three friends came over in four days at the very end.

And as of the beginning of Labor Day weekend, we’d done none of the three water-related activities I’d told June we would do in the last three weeks before school started. We’d been thwarted trying to go to the nearest outdoor pool because of its limited schedule and my inability to remember it’s closed on Fridays. Three Fridays in a row I thought, “We should go to Long Branch Pool today.” Fortunately, the last two times I remembered why we couldn’t just a moment later and didn’t raise anyone’s hopes by mentioning it. Eventually I gave up on going, though it made me a little sad never to have gone to an outdoor pool this summer. (To clarify, June’s been many times—at camp, with YaYa in West Virginia, and with friends, but I never did.)

I set the Friday before Labor Day aside for a creek walk, an end-of-summer tradition the kids and I have. It consists of taking a walk down the middle of Long Branch (or sometimes Sligo) Creek. But Friday it was freakishly cold for the first day of September, in the sixties and overcast. Noah and I outvoted June and decided to put it off for later in the weekend when it would be warmer.

Back in early August I took June to see Kubo and the Two Strings at the one-dollar second run movies, but a sprained ankle prevented the usual post-summer movie trip to the Silver Spring fountain so I said we’d have a do-over movie-and-fountain date later in the summer. We invited a friend to see Leap on Saturday, with a visit to the fountain afterward. And it was just as cold that day and raining to boot. I would have let the kids go in the fountain if they wanted to, but Norma thought it was too chilly. June would have gone in, but it was fenced off as it often is on rainy days. So that activity was out, too.

Saturday night June was complaining of a sore throat and running a fever. On Sunday morning, there was no improvement it was off to urgent care so they could rule out strep throat. We normally wouldn’t go so soon but we didn’t want anything to scotch the first day of middle school on Tuesday. The rapid strep test came back negative, but June was lethargic and we decided to wait another day on the creek walk.

On Monday, Beth made pancakes for breakfast, as she often does on holiday weekends. June felt better, so shortly after breakfast, the kids and I headed for the creek, where we waded for over an hour and saw many little fish, three crawfish, and great quantity of spider webs. It’s been unseasonably cool for the past couple weeks and the water was surprisingly cold when we first stepped in and Noah was grumbling about it, but soon he was cheerfully throwing rocks and splashing June. When I said something about “if we do this next year” he insisted we have to do it, so I guess he had a good time after all. And I fulfilled one promise.

We always go out for ice cream the last night of the kids’ summer break and this year was no exception. (Well, Noah might say it was because June, being the one to start a new school, chose the venue and we got frozen yogurt, which he pointed out, is not ice cream.) It occurred to me if we went somewhere in downtown Silver Spring we could make one last-ditch attempt at playing in the fountain, but when I said it could only be for fifteen minutes or so, June didn’t think it was worth giving up the privilege of choosing where we got our frozen treats.

While all this was going on, Beth had been toiling during her evenings and weekends moving June out of the kids’ shared room into my office, which I’m sacrificing so the kids can each have some space of their own. This has been huge project, involving a lot of moving things around and assembling new furniture. Noah helped Beth put the new Ikea loft bed together and he showed some aptitude for it. (He has the right temperament—patient and calm.) Beth’s goal was to get June sleeping in the new room by Labor Day weekend and not only is the bed finished but a lot of clothes and belongings are in there, too. But I’ll hold off on pictures until the room is finished and decorated.

It was really June who wanted and advocated for the room switch. When we decided to do it, we offered Noah the office but he said he preferred to stay put, so June also scored the bigger room. My desk is in the living room now, which isn’t ideal, but in theory, when Noah goes to college I’ll get my space back. I think I want it for the same reason June does. It makes a difference to have a room of one’s own. But right now, at eleven, June needs it more than I do. And Beth did everything she could to make it easier for me, including buying me a new desk with drawer space. (My old desk was more like a small table.)

It’s a time of a lot of changes, beyond June starting middle school and getting a new room and new short haircut. Their decision a couple weeks ago to go by gender-neutral pronouns was surprising, and it’s been hard to remember to use them, though I’m trying. They also have a new name, North, which Beth is using sometimes, but so far, I can’t bring myself to say it, though I did write it on a school form in the preferred name space. Names are important to me, almost a hobby. I read and comment on a baby-naming blog even though I haven’t had a baby to name in quite some time. In fact, the only thing I regret about not having more kids is that we only got to name two people. The names we did choose are full of family history. For a while June was considering using their middle name (and I suggested their initials—J.D.—but I don’t think that was ever under serious consideration). I think it would be easier for me if the new name was somehow connected to the name we gave them. But maybe that’s the point, the difference.

Both kids went back to school on Tuesday, a week later than usual because the governor changed the Maryland school calendar to promote late season business in Ocean City. Now we have only two snow days built in even though the old number—four—was frequently inadequate, which is the main reason I opposed this move. It’s becoming rare to have an actual 180-day school year and this will make it harder.

But maybe you wanted to hear about the kids’ first day and not about my beef with the governor? I’d tell you, but neither of the kids told me much. I spied on June’s bus stop from the porch (the stop is right in front of our house), noting that about half the kids there are seventh or eighth graders who used to wait at June’s elementary school bus stop. I saw June talking to a seventh-grader, who used to walk to school with June when the two of them were in fourth and fifth grade, and another girl I don’t know. June wore sneakers for gym, intending to leave them in their gym locker and change into crocs for the rest of the day, but they lost the crocs somehow. Noah didn’t get into band yet again, because of schedule conflicts, but he’ll be in the intermediate band second semester, so that’s something. June had almost no homework; Noah had homework in three subjects. He’s working for the school television channel this year and the first broadcast is Monday. I think this will be fun for him.

I worked only fifteen minutes Tuesday because I had an orthopedic appointment for the knee I injured last summer, then I stayed in the city for a pro-DACA rally. It was bigger than the one I attended last month, and angrier, because it was held the day the President announced the program was being rescinded. I was moved almost to tears by the speakers, who were young, brave, hopeful, and fired up. They are just the kind of people we need in this country right now and I hope their organizing is successful. If you’d like to help, Beth’s running a fundraiser for CASA on her Facebook page.

I got home around 2:40, hot and exhausted, because the day was warm and a little muggy and June had insomnia the night before, which meant Beth, June, and I were all up until almost midnight and then Beth’s alarm went off at 5:40.

I had forty minutes before June’s bus was due. I could have exercised or cleaned or worked, but instead I put a glass of ice water on my bedside table, turned the ceiling fan onto its highest setting, fell into bed, and slept briefly. There’s a whole year ahead of us and I think I’m going to need to be rested for it.