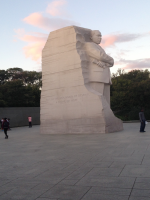 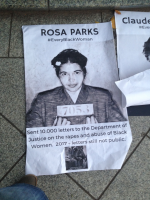 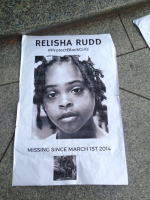 North’s going to be in production of the musical School of Rock this December. It’s part of an educational program at a theater in Silver Spring for kids from second to twelfth grade. They really wanted to be in a play and the process of auditioning seemed daunting, especially given the fact that I don’t drive, which limits my ability to get them around the D.C. metro area to go to a lot of different auditions. So, this seemed like a good compromise. You just register and it’s first-come, first-served.

They’ve had three rehearsals so far. After the second one they’d been cast in their first-choice role, Billy. If you have only a hazy memory of the characters, he’s the kid who designs the costumes for the band, and the one in the “You’re Tacky and I Hate You” meme you so often see on Facebook. North likes that’s he’s somewhat gender creative and that he has a solo. (The kid roles in the play are more developed than in the film, I hear.) After the third rehearsal, they were tickled to bring home an official script on loan from the current Broadway production.

In the spirit of preparation, we watched the first half of the movie on Friday night. I don’t usually let North watch PG-13 movies. This might have been their first (if they haven’t seen any at a friend’s house). At any rate, it was the first authorized one, but since the play’s not that different from the movie, I thought that particular horse was already out of the barn. The scene where Summer confronts Dewey about groupies wasn’t exactly comfortable for me to watch with them, though.

Because there are two to three rehearsals most weeks from now through December (and then six to eight performances), we told North they’d need to cut some of their regular extracurricular activities, and much to my surprise, they decided to ditch them all—violin, guitar, Girl Scouts, acting class, running club, and even basketball, which doesn’t even overlap much with the play, as practices start in late November and games not until early January. Most of these activities they’ve been doing for years, so I guess they just want a clean slate for middle school. They did try to get into a cooking club at school but it turned out you were supposed to register beforehand and it had filled by the first meeting. They’re also considering attending an LGBT support group at school.

Last Saturday’s rehearsal conflicted with the March for Racial Justice, which Beth and I had been planning to attend. The theater schedules rehearsals around people’s conflicts (the ones you declare by a deadline) as much as possible, but not every conflict can be accommodated, so we had to decide whether to skip the rehearsal, skip the march, task Noah with getting North there, or teach them the route on public transportation. It’s our goal for them to be able to get themselves to weekday evening rehearsals eventually, but I was thinking I’d do it with them at least a couple times first because it’s not in a part of Silver Spring we go to on the bus often. And we didn’t really want to cut into Noah’s homework time, either, so Beth suggested we skip the march and go to the evening vigil at the MLK memorial instead and I agreed.

We left the house around five, shortly after Beth brought North home from rehearsal. It was just Beth and I, as the kids were not interested in protesting anything, or as North put it earlier in the week, “chanting things no one will hear.” It does feel that way sometimes, but it also feels like we’ve got to do something, and I don’t have much faith in petitions, I only have so much money to give, and the elected officials in our deep blue county and medium blue state can generally be counted on to do the right thing without our writing or calling and pleading with them to do it. So, I write and call them occasionally, write moderate-sized checks more often, and I keep marching and showing up for rallies. And I guess North’s feelings about protest vary, too, because at dinner Monday night they asked with interest if there were any marches coming up.

Metro was single-tracking on the blue, orange, and red lines, which happened to be the exact lines we’d need to get to the Mall. Parking’s out of the question, there, though, so we allowed ourselves almost two hours to get to the vigil, which was supposed to start at sundown (6:51 according to my phone’s weather app).

We had good luck with the trains and arrived on the Mall around 5:45, so we decided to take advantage of the restrooms and food trucks near the Washington Monument. We walked down the long line of food trucks, looking for vegetarian options. The first one we saw falafel, also the second, third, fourth, and fifth. In fact, the only other choice was a veggie burrito, and Beth wasn’t in the mood for either, so she decided to eat at home later, but I got some falafel and humus. By 6:15, we were walking toward the MLK memorial.

It was a pretty evening, with the clouds touched with pink and the water of the Tidal Basin rippling and silver. When we got to the memorial around 6:35, there was no evidence of a vigil, but it was still light and there was no precise official starting time so we walked around and looked at the MLK quotes carved on the back wall and then settled in on bench.

Eventually some organizers, mostly white women, showed up and started laying down posters of black girls and women who have been victims of violence or organized against it on the ground. They were unrolling a long canvas with a painted message when some park rangers came over. I guess they didn’t have a permit because soon they were picking up the posters and the canvas. There was some discussion about the food they’d brought as well, a bag of apples and some granola bars to distribute to anyone breaking their Yom Kippur fast. I think the fact that the march had inadvertently been scheduled on Yom Kippur and the ensuing criticism was probably the reason for the sunset vigil in the first place. But it never really got off the ground. We waited until 7:25, by which point it was full dark, but there were never speeches or candles, or anything very vigil-like, only a small knot of people (ten at the most) standing together, and dwarfed by a school group (mostly teenage girls and adults about the right age to be the parents or teachers of teenage girls, so I’m assuming it was a school group).

It was a disappointing outcome, but not all bad. The MLK monument is always a moving place. We watched all kinds of people—an elderly black woman on a younger woman’s arm, a middle-aged black couple, white teenagers—snap pictures in front of the statue of MLK. Plus, the Tidal Basin with the monuments all lit up is beautiful at night—there’s a reason it’s a classic D.C. date spot. It could have even felt like a date, as Beth and I were there without the kids. But it didn’t really. I was feeling melancholy and Beth seemed subdued as well. It just wasn’t the evening for activism or acting romantic, I guess.

But there’s always tomorrow. When North asked what we could do for National Coming Out Day, I wasn’t sure. Beth and I don’t really have anyone left to come out to, but I asked North if they’d like to write a guest post about being non-binary and they said yes. Stay tuned.