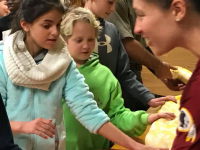 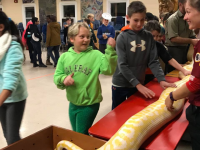 As I mentioned earlier, North went on the MCPS sixth-grade outdoor education field trip this week. They left on Monday morning and returned Wednesday afternoon. In some ways, this trip seemed less momentous than when Noah went on it because when he went it was the first time he’d been away from home and not in the care of relatives. I didn’t blog about it because he told us almost nothing about whatever happened on that trip. Really, it was something like, “we saw a snake and a turtle.” But I do remember missing him sharply, even though he was away less than three days. North on the other hand has been to sleepaway camp the past three summers, so I was used to the separation and didn’t faze me. But in other ways it was more complicated than Noah’s Outdoor Ed experience because the kids’ sleeping quarters were segregated by gender and this was distressing to North.

I should say here that the school has been pretty accommodating of North’s new gender identity. They are permitted to use the unisex restroom in the nurse’s office and the counsellor has briefed all their teachers on their preferred name and pronouns. Most of the teachers (with one exception) are on board and most of the kids who know have taken it in stride (again with one exception). But it took a while to figure out how we’d handle the housing problem.

North didn’t want to sleep in the girls’ area and they didn’t want to be all alone in a separate room and those were the choices on offer, either that or come home both nights. Coming home wasn’t an ideal solution because Outdoor Ed is supposed to be a team-building exercise for the class and breaking it up into three pieces would compromise that. Plus, Beth would have to drive forty-five minutes to Rockville to fetch them Monday night and then forty-five minutes back home and then do it all over Tuesday morning, Tuesday evening, and Wednesday morning. But if North chose the separate room, Beth would have to miss work, so she could act as a chaperone because they weren’t allowed to be alone overnight. This wasn’t ideal either, but that’s what North chose. I have to admit I asked if they could consider sleeping in the girls’ area just to simplify things. After all, only a few months ago they were quite happily attending Girl Scout sleep-away camp. They were not open to the idea, to say the least.

Beth drove North to school Monday morning. In the rush, they forgot the bag lunch they were supposed to bring so Beth gave them the apple slices and crackers from her lunch—North didn’t want the garlic cheese curds. When I found the forgotten lunch on the couch, it made me a little sad to see the plain brown bag.  I decorated every elementary school field trip lunch bag, covering them with stickers, and even though I didn’t think I’d keep doing it in middle school (for one thing North’s making their own lunch now). I hadn’t even thought about how I wasn’t doing it until that moment. Always with the growing up…

Anyway, I learned from Beth that when they arrived at school kids were piling their luggage up into two piles—boys’ and girls’. So rather than just dropping North off as planned, Beth parked the car and found the sixth-grade team leader to find out where North should leave their luggage. He said in either pile was fine—North was on both lists. But this is the whole point for North. They don’t want to choose, so Mr. O took their luggage with him.

Beth went from the middle school to work, came home, raved over the dinner of butternut squash fritters, apple slices, and vegetarian sausage I’d made (maybe because all she had for lunch was cheese curds and she was very hungry), and then she drove out to the environmental education facility, where she’d stay until Wednesday morning. (The kids would be there until Wednesday afternoon.)

Monday evening I kept thinking of how my time alone with Noah could be fun—we could read Stephen King, watch scary movies, put the finishing touches on the Halloween decorations—if only he didn’t have so much homework. Instead, on Monday he did a calculus packet, finished a biology lab report, and read and answered questions on a chapter of his biology textbook. I told him he should go trick-or-treating Tuesday no matter what his homework load, and he agreed.

But he didn’t get a lot of homework on Tuesday and when he got home from school on Halloween, he got the electric things and the fog machine working, then read an essay about the role of joy in various ancient religious traditions for his World History class. Because he finished shortly before dinner time, we even snuck in a little Wizard and Glass. It was only fifteen minutes, but I’d hoped to read with him while Beth and North were out of town, so it made me happy.

Meanwhile, I got occasional updates from Beth—they were learning about watersheds and had done a Predator/Prey simulation. North was a carnivore and Beth was a habitat-destroying developer. “Not cast to type,” was her comment. Later she said they were going to see a presentation by someone called Reptile Man, who I assumed was a man who spoke about and displayed reptiles and not a half-reptile, half-man mutant. But you never know, it was Halloween. (Later there was photographic evidence of Reptile Man’s giant albino python.) The kids also watched a little of Ghosthunters on Icy Trails, but they didn’t have time to finish it. (This was one of my pet peeves at a kid. I hated it when we’d see just part of a movie in school.)

Noah set out to trick or treat around seven, and I listened to my new Halloween playlist almost twice through, read Austerlitz, looked at Facebook photos of all your kids in their adorable or gruesome Halloween costumes, and occasionally gave out candy, from the time the first trick or treater, a teenage boy in some sort of mod get up, arrived at 6:40 during “Werewolves of London” until the last two, a chef and a detective, arrived at 8:30 during the second playing of “Vampire Girl.” We didn’t get too many kids, probably less than a dozen. I kept thinking I heard people on the porch but usually it was just the fog machine switching itself on and off.

Noah came home and reported that among the people who gave him candy were a former employee of Equifax and someone who works for the federal government and is investigating Equifax. They both appreciated his costume. Noah and I blew out the candles and unplugged all the electronic things around 9:10, but I left the porch light on another fifteen minutes or so, just in case someone else came. It was a strange Halloween, without Beth and North, and I didn’t feel quite finished.

Day of the Dead

Beth dropped by the house the next morning, after Noah had left for school. She said everyone did a lot of walking outside and the kids made masks and the teachers were in costume. The theme was fantasy football so they were dressed partly in football jerseys but with wardrobe elements fantasy characters would wear. It was a nod to Halloween, I guess.

That afternoon I went to North’s school to pick them up. We went to the nurse’s office to get the vitamins and Lactaid they’d taken to Outdoor Ed and while we were there we had to iron out a detail about permission for North to use the nurse’s bathroom. We handled the vitamin pickup first and during this discussion the nurses kept referring to North as “he,” even though the name we’d written on the bottle was “June,” as we still use that name for official business. This wasn’t the first time I’ve heard someone take North for a boy since they got their hair cut short and started wearing more boyish clothes, but it still startles me. I let it go until we got the vitamins back, then I explained the situation with North’s gender identity and the bathroom to both nurses. They seemed open to the idea and then seemed to recall they’d heard something about a kid needing to use the nurse’s restroom, but they hadn’t been introduced to North. It’s a big school and sometimes communication isn’t seamless.

As we approached the bus stop, we saw a 12 pulling away. I knew it would be twenty minutes before the next one, but I didn’t really mind. I knew I was more likely to hear details about Outdoor Ed while we were in transit than once we got home, and I did. North cut their arm falling in the creek while taking water samples, they enjoyed the confidence exercise (a sort of obstacle course), there was a campfire. The predator/prey exercise was fun. They saw many snakes, not just the python. The food was okay, but not great. The vegetarians had cheese dippers, which they describe as an inferior sort of mozzarella stick with the tomato sauce on the inside, way too many times. All in all, they seemed happy with the experience and eager to get home and see how much candy I’d saved for them. I asked if they’d like to light the jack-o-lanterns one last time that evening, since it was still Day of the Dead, and they said yes.

I made a pumpkin-apple cake with a cinnamon-pecan glaze to celebrate everyone being home together and Noah wanted to know if we could have cake every time we were all at dinner together. North made dessert, too, little sugar skulls molded of a powdered sugar-and-water paste, and with that little gesture, our strange Halloween was over.