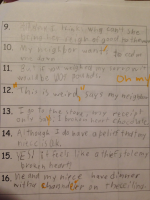 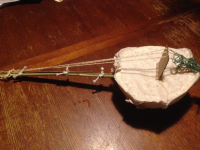 When I was looking for positive things about February in my last post, I forgot an obvious one.  A week ago, June’s afternoon class had a publishing party, to showcase the kids’ second quarter writing. I’d been to the first quarter one in November, so I knew what to expect. Each child has a collection of writing on his or her desk and kids and parents travel through the classroom, read the papers, leave compliments on a sheet provided for this purpose, and then everyone eats. At the last party, being a former writing teacher, I took my responsibility seriously and tried to leave substantive comments on each child’s work. Being a well-trained middle-class mom, I also brought juice boxes.

This time June wanted us to up our game a little, so we brought grocery store cupcakes.  And Beth was able to take off work early, so we were both there, although I arrived ten minutes late and Beth got there about hallway through the festivities. I got right to work circulating around the room and reading. There were factual essays about snow and re-imagined or original fairy tales on display. Because I was late and there was less time for reading and commenting than at the last publishing party, I probably only read work from half the students in the class of sixteen, but I got a good sense of what they’d been working on last quarter.

The reason we were on a tighter schedule was that there was a new activity. The kids had illustrated their stories using a computer animation program and these were projected onto a screen while recordings of the kids reading their work played. Or that was the idea anyway. In practice the recordings were so soft as to be completely inaudible, except for the occasional word or two that could be heard, in isolation and sometimes rather loudly. (And whenever that happened the kids would laugh in surprise so it was hard to catch even that word or two.) I couldn’t even follow the stories I’d just read. I think if I’d been the teacher I would have ditched this plan and had the kids read their papers aloud, but we sat politely and clapped at the end of each story as if we’d heard it. June’s was last, and miraculously the audio worked fine. We could hear the whole story.  The class laughed again at this turn of the events, but Ms. K shushed them and we listened.

Most of June’s classmates had opted for the alter-a-fairy-tale approach, so there was the story of the three little sharks (who tell the wolf they won’t let him in, not by the hair of their finny, fin fins) and the Gingerbread Fish, who swims away from an ever-growing mob of pursuing sea creatures. June went the original story route, however. I wish I had a copy of the story so I could tell it in more detail, but it’s still at school. Here’s the gist:

A boy discovers the condiments in his refrigerator are alive and move around at night. He writes a story about it for school but the teacher throws it in the recycling bin because it was supposed to be a non-fiction piece and she doesn’t believe that it actually happened. Then, seized with doubt, she breaks into his house at night, and observes the phenomenon herself, fainting in surprise when she sees it. Back at school she plucks the story from the recycling and displays it on the wall. And then somehow the teacher ends up dying of injuries sustained during her fall when she fainted. The story ends, “And they all lived happily ever after, except Ms. K.”  Yes, she did use her teacher’s real name in this story. Now the class was laughing all over again and repeating June’s final line to each other.

I told Ms. K she’d been a good sport about being killed off in June’s story, but she didn’t seem to mind.  “June’s writing is amazing,” she told me.

June brought home a lot of language arts homework this week, some of it routine like alphabetization practice and a worksheet on contractions. But what caught our attention was a series of sentences using her spelling words, which she opted to string into a story, and a rather dramatic one at that. There’s an excerpt in the photo. Our run-away favorite line is, “But if you weighed my sorrow it would be 1,009 pounds.” (The point of the spelling lesson was ie/ei words, if you couldn’t guess.)

But her dramatic streak is not limited to her school writing. On Monday she made arrangements on the bus to shoot hoops with a fourth grader who lives down the block. It would have been quite the social coup, but the girl never came.  June waited for her on the porch for a long time. It wasn’t until the next day that I found the notes she made while waiting. “Strange sounds, windy, no sign of A., getting dark early.” All it was missing was howling wolves getting nearer and nearer…

When I quoted this on Facebook, one of my friends commented that we had “another writer in the family.”  She comes by it honestly. We are a family of writers. Beth’s the online communications director of her union. My father was a newspaper, magazine, and eventually web site editor; my sister and I work together as copywriters; I was once an English professor, and from the time I was a kid into my early twenties, I used to write fiction.  I have recently been thinking of giving it another try. There’s a contest run by Browse-About Books in Rehoboth I want to enter.  The stories have to take place on the Rehoboth boardwalk. So far, though, I don’t have any good ideas, so we’ll see. Meanwhile, Noah and his classmates are amusing themselves by writing a collaborative story online. It’s a version of The Hunger Games, but with themselves as characters. He’s participating even though he hasn’t read the books yet.

Of course, Noah has been writing for school, too. He had a two-page paper about Mauritania due on Thursday for an ongoing unit on Africa. They had a celebration called Africa Fest that day with food and music. For Africa Fest, he had to make a trifold poster with two other students, make a model of a Mauritanian artifact (he chose a stringed instrument called an ardin) and write the paper (a demographic and historical overview of the country).

It was a straightforward assignment, with a series of factual questions to research and answer.  It wouldn’t have been too stressful except he’d neglected to work much on it, focused as he was on his product liability documentary, and even though he is a good writer, any kind of writing is slow for him. He didn’t get to the paper the weekend before it was due, because of other assignments and then on Tuesday night he didn’t feel well and couldn’t work productively, so Wednesday afternoon found him with the research done, but only three sentences written.

This seemed like a completely impossible situation, because the artifact wasn’t made yet either. I advised him to skip algebra homework as well as practicing his drums and to focus only on Africa Fest assignments. He decided to start with the instrument, which took until after dinner to construct, but came out pretty well. It’s the kind of thing he does well. He wasn’t completely satisfied with it, though. He thought it would be better if it actually played music.

It was seven by the time he started on the paper.  Beth and I had consulted in private about whether there was any chance he could produce a passing paper in the time he had and if maybe he should just take the failing grade and do his math instead, but he wanted to try. It did seem a shame to let all the research go to waste.

He ended up staying up until almost midnight and working on it some more in the morning but he did finish. Beth and I normally go to bed around 9:30 since the alarm goes off at 5:45, but I stayed up with him until 10:45, sitting with him in the study, mostly reading a magazine, feeding him the next question he needed to answer whenever he finished one, and making sure he didn’t get sidetracked or spend too much time on any given question. Once the paper was written and it was just the Works Cited left, I went to bed, leaving him at the computer. I think I see a lot of all-nighters in his future as a college student.

But the good news is now that IDRP and National History Day and Africa Fest, all of which kind of ran into each other, are over (well, almost over—he still has to finish reading Things Fall Apart, write a speech about Mauritania, and write a comparison paragraph about colonialism in Mauritania and Angola this weekend) but once they are all over, there might be a bit of a lull before the next big thing, which is a Shakespeare unit.  He’s not sure when that starts but he doesn’t have any assignments for it yet. I worry about the time it will take him to read the plays, but I also think it could be a lot of fun.  Chances are I will read along with him, for what family of writers could resist that?