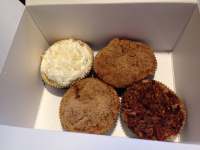 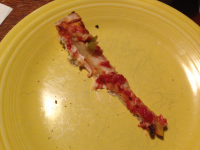 I finished with my week’s work Thursday morning just before lunch. After being busy for all of January and most of February, my work has slowed. I knew this would happen eventually because Sara had warned me at the end of last year when one of her major clients scaled back, but coming a few months before summer, a season in which I usually work and earn less and spend more (on vacations and summer camps for the kids), it’s not a welcome development. So I’m casting about for ideas about how to earn some supplemental income, but also trying to enjoy the extra time instead of fretting about it.

This was my third week on reduced hours and the first week I minded it. The first week I was glad of the break and I got some satisfying cleaning projects done, and the second week the kids had two days off school—more weather-related cancellations—don’t even get me started—four inches in March, in Maryland! It’s not like we live in the Klondike, except apparently we do.  And then later that week I was sick, so it was just as well I didn’t need to work much.

After lunch, I cleaned the bathroom, and then set out on some errands. June’s birthday party—her first slumber party—is in about a week.  Her party theme is outer space and I was wondering if the post office was currently selling any stamps with pictures of the moon, or stars, or something like that for the invitations.  I’ve often had good luck with this pleasing little detail of party preparation, but not this year. The closest thing would have been stamps picturing the Medal of Honor, which is star-shaped, but not particularly celestial, so I passed. I ended up using international forever stamps with a picture of the Earth seen from outer space we already had, even though they are worth more than the postage required. I did get her a birthday card, however, with a face made of the sun on one side, and the moon on the other. When you open it, there are stars and it says, “Wishing you the sun, the moon, and the stars,” so the trip felt like a success anyway.

Next, at Beth’s suggestion, I stopped at Capital City Cheesecake and bought four mini-pies for Pi Day on Friday (March 14, or 3/14, if you’ve never heard of this holiday). I got two apples, a coconut cream, and a pecan.  I would have stopped at the Co-op for milk, but I needed to get home to meet June’s bus and I didn’t want to cut it too close.

Often I’m still wrapping up my work for the day when June comes home, but I always spend at least the first fifteen minutes she’s home having some one-on-one time with her before her brother gets home. Then I will often go back to work while she starts her homework, unless it’s a violin lesson or drama class day. Thursday was neither and I had no work, so I suggested we take a walk in the woods where the crocuses were blooming. I’d noticed them the day before when I was picking her up from drama class. Every year I look forward to the day I first see them, a riot of tiny pale purple flowers, bursting out all along the banks of the creek and the winter-muddy path beside it. They all bloom at once, sometimes as early as mid-February, probably in late February on average. It was so cold this year they were late, but they finally came.

Wednesday had been warm, so warm I went bare-legged under a denim skirt, which turned out to be a bit of irrational exuberance; I was chilly much of the day but I refused to change clothes out of stubbornness, even wrapping my legs in a blanket as I read the Iliad (for book club) and drank hot tea on the porch. By Thursday, a cold front had come in—the high temperature was thirty-five degrees lower than the day before—and I was wearing long underwear under my corduroys and a sweater under a hooded sweatshirt. The crocuses were bundled up, too. Most of them had closed, even though it was a sunny day.  Nevertheless, it was pleasant to be outside in the sun.  I was watching June carefully for signs of an incipient migraine, as sudden drops in temperature often bring them on, but she was fine.

We’d packed an after school snack for June to eat at the picnic table by the creek—a vegetarian hot dog with ketchup wrapped in foil to keep it warm, a carrot and a bottle of ranch dressing, and a plastic baggie of chocolate and vanilla bunny-shaped cookies. I was putting the snack in a tote bag when June patiently informed me it really needed to be in a picnic basket. (I believe Beth made the same error the last time she took June on a picnic.)

After eating, admiring the flowers, practicing her Pocahontas pose on a small boulder, and pretending to be a princess in a magic forest, June was ready to go home. She helped me make the once weekly dinner she plans (scalloped potatoes and more hot dogs). Even though I would have liked to work more this week, it really had been a pleasant afternoon.

I had the whole day free Friday and I’d like to say I cleaned the house from top to bottom, or took some productive steps toward finding extra work, or started the story I’ve been meaning to write for Rehoboth Reads short story contest, but I didn’t do any of those things. Instead I spent too long online deciding which kind of paint to buy for the sun-catcher painting craft at June’s party. I did two loads of laundry and dried one of them on the clothesline. I straightened up the kitchen and dining room, and then went on a meandering series of errands.

I started with a leisurely cappuccino back at Capital City Cheesecake, where I heroically resisted the St. Patrick’s Day cupcakes (chocolate with green frosting), knowing there would be pie that evening, and then I headed to the Co-op for eggs, milk, and tofu. While there I got a birthday card for my sister and pondered whether or not to buy thank-you cards depicting a lighthouse and a starry sky for June’s post-birthday thank you notes. I decided not to, as June might rather make homemade cards.  (She made her own invitations. I typed up and printed the logistical info for the inside of the cards and she drew an outer space scene on the front and a girl in a sleeping bag on the inside of each one.)

Then I took a bus to the closest county library in search of How to Train Your Dragon books because our town library has a low stock of them and is always out of the one June wants. I got the next two in the series. By the time I got home there was just enough time to ride the exercise bike before June’s bus came.  For most of the day I was listening to my iPod, first a podcast and then twelve chapters of Anne Rice’s The Wolf Gift.  (Hey, I can’t read Homer all the time.)

And speaking of books, when the kids came home, I read Pet’s Revenge to both of them on the porch.  The Edgar and Ellen series is in the rare sweet spot of books both kids like so it’s quite a find, but because the kids are rarely free at the same time and Noah has a longer attention span I had been reading the books to each of them individually. I like the books, too, but not well enough to be reading them twice in such quick succession, so once June and I got to the end of book 3, I made her wait for Noah to catch up, and we started book 4 together.

In case you were imagining an idyllic scene with the two of them listening raptly to the dulcet sounds of their mother reading in the mellow late afternoon light, it wasn’t much like that.  Even though seating arrangements were carefully negotiated before we started, June’s not much for sitting still and she was either swinging dangerously fast and close to Noah and me, or repeatedly getting up from the sky chair and complaining when Noah repeatedly stole her place. The bickering made me think I might rather go back to reading the series twice in relative (if redundant) peace and quiet, but I’m not giving up yet. It just seems like the sort of idea that ought to work, so I’m going to try to make it work.

They both practiced their instruments next while I wrote this post, though once June was finished and Noah came upstairs for some music, they found the time to argue over the laptop. It made me wonder why they were fighting so much and then I realized it might be because basketball season’s over so June and I weren’t at Friday afternoon practice and they were both in the house without homework occupying Noah, which honestly doesn’t happen very often.

We had take-out pizza for dinner and the pies for dessert. Noah ate three slices of pizza and then used a ruler to approximate .14159 of a piece and ate that, too.  We did not measure the radius of the pies and calculate their areas, but Beth tried to explain what pi means to June and although she didn’t quite follow, she recalled a Cyberchase episode about it.  We then discussed why other irrational numbers don’t have their own holidays.  I said I couldn’t think of another one that sounded like a food, but Noah said the square root of two. You could eat root vegetables for that one, or maybe carrot cake if you were feeling festive.  It was a cheerful dinner, a good ending to my furlough day.

I’m sure I can find plenty of ways to fill my extra time over the next weeks, but if you happen to need a writer, researcher, or editor for short-term projects any time this spring, give me a holler.