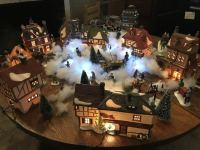 Monday afternoon at 2:40, Beth and I left the house together. She was headed to pick North up from their partial hospitalization facility, and I was headed to pick Noah up from the airport. Beth dropped me off at the Metro stop, where I shared an elevator with someone who didn’t see fit to extinguish his joint during the ride, so the elevator filled with pot smoke. I was annoyed, but it didn’t diminish my excitement to see Noah for the first time in three and a half months.

Despite what I said before about not taking pictures of the Great Barrier Reef, Noah did end up sending me some cool ones, taken from the air when he was returning to Robina, where he lived this fall (well, spring). He had a two-week stretch between the end of classes and his homecoming. Aside from the trip to the reef, he visited the beach, did some Christmas shopping, and then travelled to Sydney a couple days before his flight home. He sampled noodle dishes in Chinatown and went to see the harbor and the Sydney Opera House.

Noah’s phone battery died on the plane home, so he didn’t know I was waiting for him at the baggage claim, but we managed to find each other. He was travel-weary and didn’t want to contend with all his luggage on the Metro, so I called a Lyft. We had some trouble finding the driver and when we did connect, the driver was irritated with me and rude and accused me of wasting his time. Then in the car when I cracked the window because he was unmasked, he rolled it back up. Also, he was vaping the whole time. It was the first time in my many times in a Lyft I didn’t tip the driver, but I didn’t report him either because I didn’t want to be a Karen.

In the car I alternated between peppering Noah with questions and letting him be. He looked very tired after a journey across the Pacific and the United States. I thought he might want to go straight to bed, but he consented to stay up long enough to eat the lentil-noodle-chard soup I’d made, to keep me company and chop cilantro as I put the finishing touches on the soup, and even to watch How the Grinch Stole Christmas after we ate.

Once he did crash, though, it was an epic sleep. He went to bed at 10 p.m. and didn’t get up until 8:40 the following evening. When Beth and I left in the early afternoon to go to participate in multi-family group therapy at North’s facility and then bring them home for the day, I thought for sure he’d be up when we got back but he wasn’t. And because North had a migraine that night, it was just Beth and me eating the broccoli-cheddar-quinoa fritters I’d made because everyone likes them. By the end of the day, I was checking on him every couple of hours to make sure he was still breathing.

Having slept that long, Noah couldn’t sleep Tuesday night, and he ended up with this sleep dysregulated for several days, but I told him he needed to be up by late afternoon on Wednesday because we had a family activity planned.

It was the solstice and when we travel for Christmas (which we almost always do) we have a tradition of opening a few presents on the solstice to lighten our load a little. We’re spending the holiday with Beth’s mom, brother, and sister-in-law, so once North got home for the day we opened presents from my side of the family. We gathered in the living room, cheerfully lit with lights on the mantle and in the Christmas village I just inherited from my mom (who’s downsizing), and ate butter cookies decorated with red and green sugar and butter-pecan snowballs I bought at the bakery for the occasion while we unwrapped gifts. Beth got a set of pumpkin-carving tools she’d been wanting and fancy chocolate bars. I got two books and three jars of unusual nut butters. Noah got a book and a camera strap, and North got a check.

Beth, North, and I had a virtual family therapy session and after that, we had tofu-veggie bowls for dinner and then we went to Brookside Gardens to see the light display. We’ve done this a few times, but it’s just as magical every time to walk along the wooded paths, admiring the colored lights outlining tree branches or in the shapes of animals and plants. There were a few new features, a machine blowing bubbles made of liquid nitrogen, and steam issuing from the sea dragon’s mouth, but mostly it was the same as I remembered. That’s nice sometimes.

It was also nice that the outing wasn’t derailed by a migraine. It could have been because North’s still having them quite frequently, more days than not. From that we can gather that at the current dose, the new preventative medicine isn’t helping, but they’re not at the full dose yet. They’re building up to it. The good news is that the rescue medicine is very effective. Most of the time it heads the headache off in an hour or less. But…North is only allowed to take it twice a week, so they need to ration it. Every time a headache starts, they are forced to consider if it’s medication-worthy, based on what they have going on that day. Anyway, this time when a headache started right before dinner, they decided yes, it was a medication day.

As it turned out, it was Noah who was ready to leave the gardens before anyone else. He’s not only having trouble adjusting to a time difference of more than half a day, but he’s also having trouble with winter weather, having just come from summer, and he’d lost one of his gloves. It wasn’t super cold, around freezing, but that was too cold for him.

We were planning to leave for Blackwater Falls State Park on Friday morning. If you live in the U.S. or Canada, you’re aware of the massive weather system that derailed that plan. Most of our route would have been fine, but there was a stretch of road that was treacherous, with snow and very high winds, so after monitoring it all morning, an hour before we were set to leave we decided to stay home an extra day. Blackwater is one of Beth’s very favorite places in the whole world, and we’ve spent every Christmas since 2016 in a cabin there, so we were all disappointed to have our stay there cut a day short.

But there were some compensations. North and I took a walk to Starbucks. It was raining for most of the morning and temperatures fell rapidly as the day progressed, so it turned over to snow briefly before the skies cleared. It was over quickly, and it didn’t stick, but it was our first snow of the year, so I thought the occasion merited warm beverages. The walk there was fine, but the wind picked up as we were at a table outside, enjoying our hot chocolate and chai, and we decided to get moving again. North’s feet were wet because they’d stepped in a puddle on the way there and I wasn’t wearing gloves and wished I was, but it was still a fun outing.

At home, I read with both kids—The Inferno with North, while they inked a cityscape that they’re working on for art class and What Strange Paradise with Noah, his Christmas present from my sister, one of the gifts we opened early.

Beth and Noah watched Andor and we all watched a lot of Rankin-Bass Christmas specials—Santa Claus is Comin’ to Town, Rudolph the Red-Nosed Reindeer, and The Year Without a Santa Claus, the last one while we ate cheap delivery pizza, which as I ate it, I realized was just what I wanted. And even if we weren’t where we wanted to be, and with all the people we wanted to be with, it was still good to have an idle day before the holiday, with just the four of us.